The look? Lance's wasn't the first on the Alpe...

'75 Tour winner Bernard Thevenet was in Jaune, but '76 winner and best climber Lucien van Impe had made his bid for victory on the Col du Glandon, and was away and keeping a healthy gap up the finishing climb to Alpe d'Huez.

It looked like two-for-two for the man from Impe-Mere.

Behind him, a select group had already shelled the cannibal Eddy Merckx who was riding his final Tour.  Thevenet was left with the two Dutch favorites - Hennie Kuiper and Joop Zoetemelk - glued to his wheel, and not taking any pulls.  "Your jersey, your responsbility meneer."

Professionally appropriate tactics that  didn't set too well with Thevenet, who gamefully led the chase behind Van Impe.   Hands on the tops, grinding a giant gear around with all the effort of his rocking shoulders.   With Thevenet, cycling was a full body effort.


Check out 'The Look.'     He gave it more than once.  Probably with a few choice words thrown in. 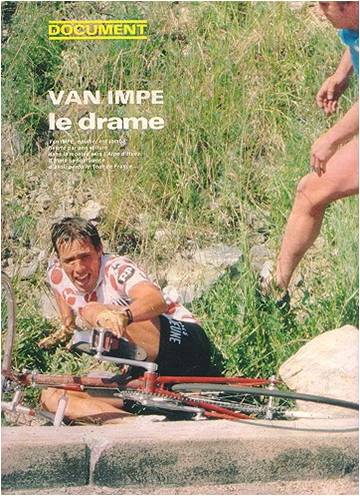 More drama soon followed.  Van Impe was crashed by a car, losing his lead with a delayed bike change. 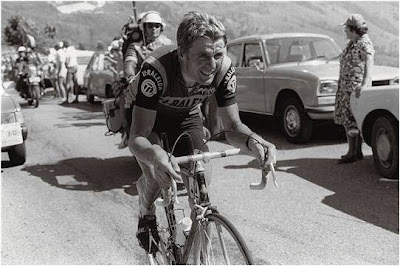 Kuiper jumped away from Thevenet and blew by the stranded Van Impe, to eventually take the stage. 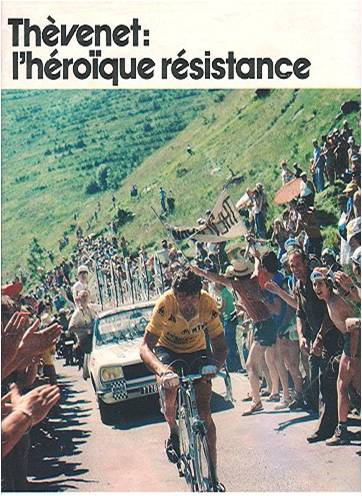 Thevenet was forced to go deeper than he'd ever gone before to keep the gap down.   Riding the top of the climb in the big ring, he dropped the rest, burying himself in a desperate pursuit to save the jersey, and his Tour, by a mere 48 seconds over Kuiper.   He was wasted afterward, saying later he didn't have the strength to get up the stairs to his hotel room.


Zoetemelk blew up, and even crashed on the final turn before the line.   Quite a day.  Watch the stage here, and here, and the post-stage interviews with Thevenet here, and Van Impe here.

There's a great quote in Tim Krabbe's classic cycling novel 'The Rider' where he references this stage:

I recall Paul Kimmage wrote about his time on the RMO team when Thevenet was Team director in the eighties.  He was driving down the Alpe in a car after the stage, and somebody remarked how demoralizing it was as a rider to look up and see the crowds lining the endless hairpins above you still to climb.   Thevenet laughed, remarking, "I don't ever remembering having the strength to look up."