June 06, 2014
Okay, so it's Thursday night, and we're all in a crowded hotel bar in Clonakilty.  And I mean all of us.  The real Ras is in the same hotel tonight. 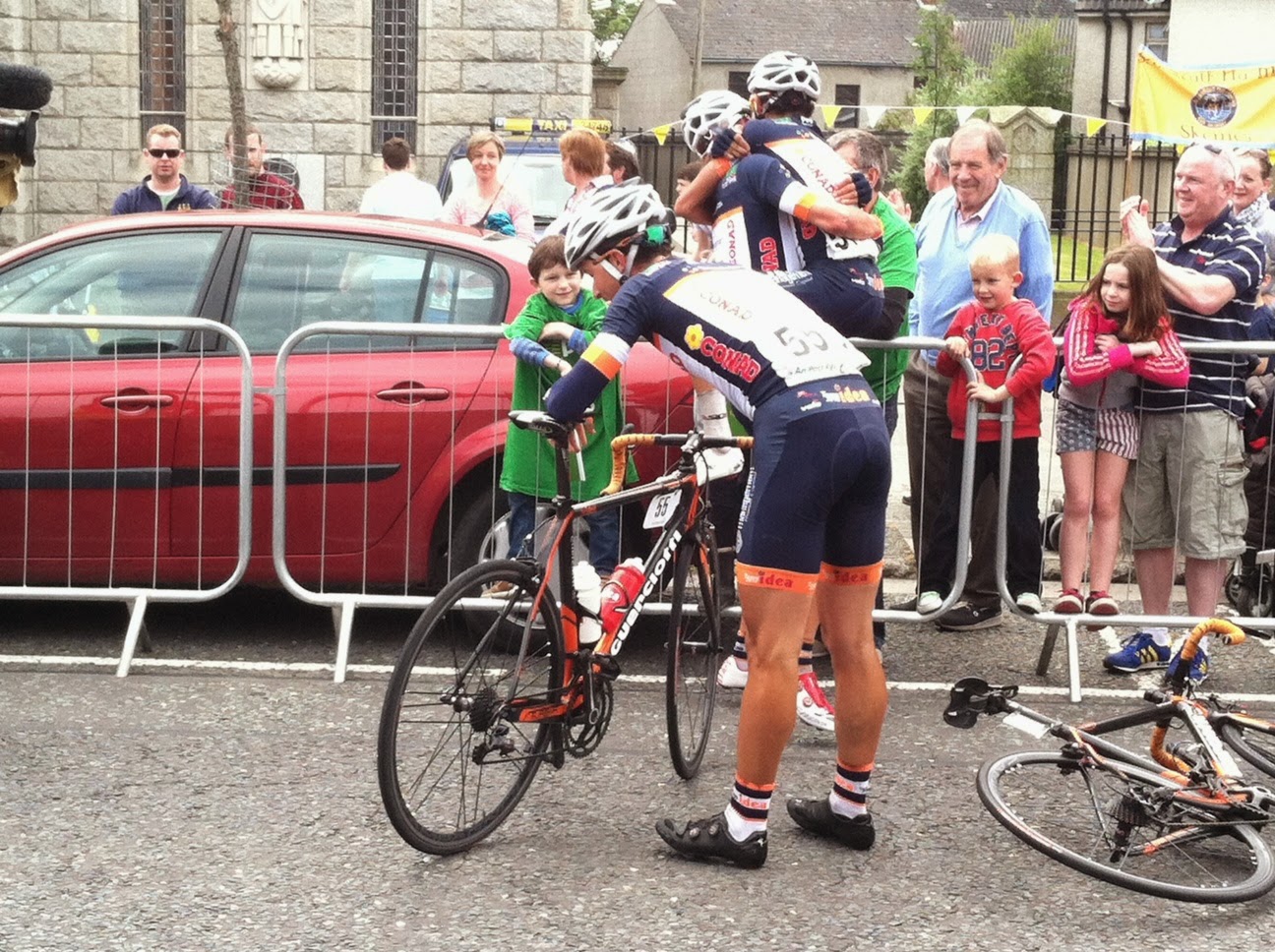 There's a quite mighty craic. Alan bumps into Emma O'Reilly and gets caught up after many years, a world away from Boulder, Colorado.  Paul chats with former Irish Olympian Seamus Downey, his wife, and their friends.  Seamus tonight is the proud father of An Post rider Sean Downey, who's kicking ass and taking names in the Ras this year as the top Irish rider, sitting 6th on GC.  They're reminiscing with anecdotes and memories of Paul's late dad J.J.  Lots of the Race the Ras guys are here too, all having a great time.  I'm sitting with Aaron and Brian McCormack, and we're enjoying that ever-so-perilous 'just one I promise' after dinner pint.

Slouching at stools at a high bar table next to us is a group of skinny, tan, clean cut and identically
tracksuited 20-somethings.  Not a Guinness in sight, just mineral water and cokes.  I recognize they're chatting in Italian, watching the TV. Euro boys.  Like kids their generation everywhere, they're laughing while texting, and staring at mobile phone screens. It's the Team IDEA 2010 ASD UCI Continental Team.  The Italian team at this year's An Post Ras. 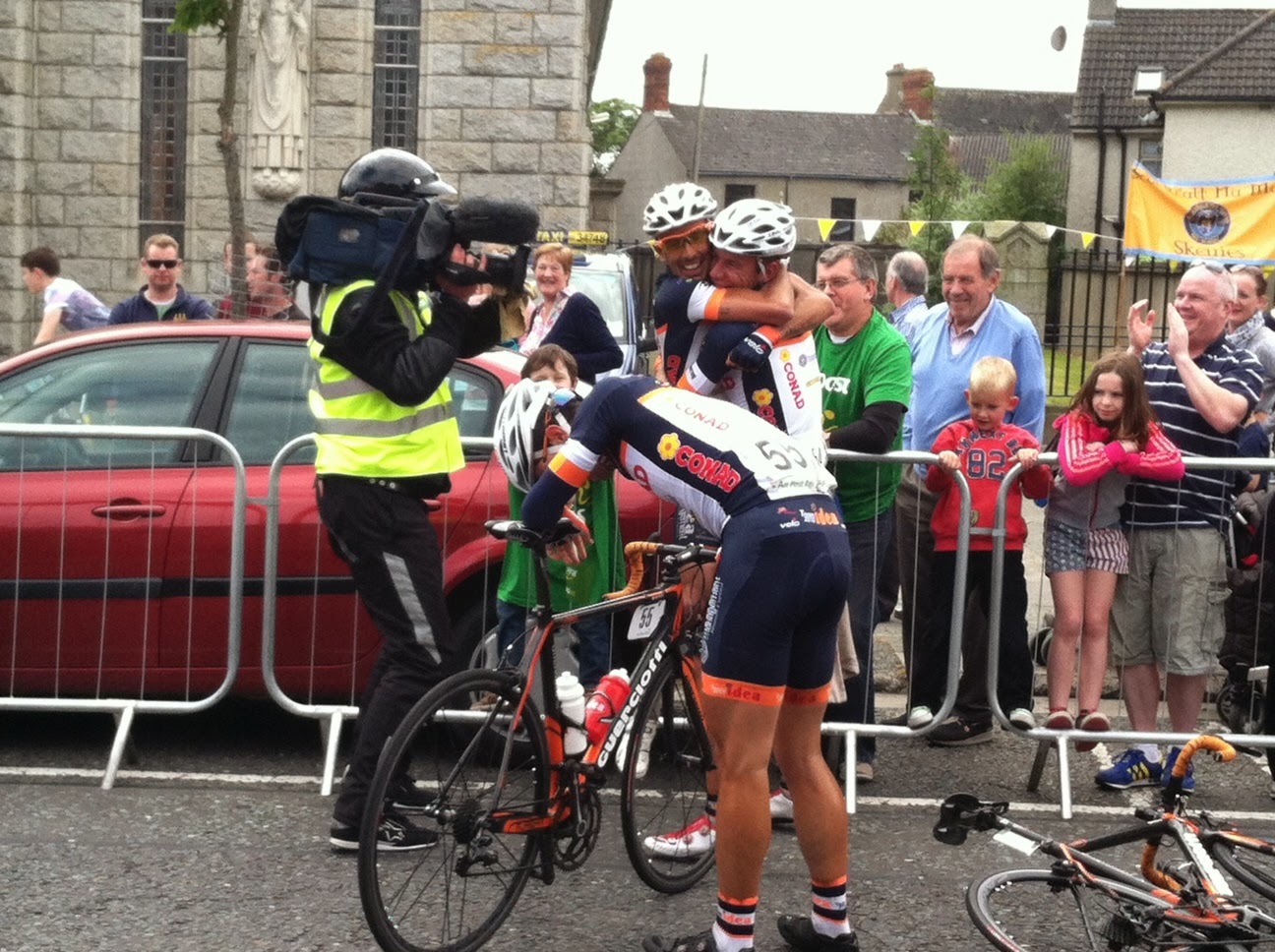 I'm always keen to practice my poor Italian, so I strike up a conversation with the tall kid nearest me. I later find out his name is Mirko Tedeschi.  He's a really likeable kid, reminds me of one of my son's friends.  Polite, smiling.  Most American kids these days ought to pay for comportment and manners advice from Mirko and his team, but I digress.

I ask him about how he's liking the Ras, and tease them about how they're dealing with the Irish weather. Reflexive Irish vs. Italian ball-busting, familar from growing up in a Boston suburb where virtually all of your school mates were either of Irish or Italian descent. Mirko doesn't take the bait and hit back, rather he confirms that indeed they are finding it hard.  An endearing open honesty. His mates confirm by rolling their eyes and making horizontal hand gestures.  Bah, tanto, tanto pioggia.  So much rain.  He asks me if I know anything about tomorrow's parcours.  I turn to Aaron and Paul for the local knowledge.  They say it's going to be a headwind tomorrow, almost certain, all day, all the way up to Carrick on Suir.  And more rain.  Hmmm... the yank in the room as translator.  This has got to be a first... 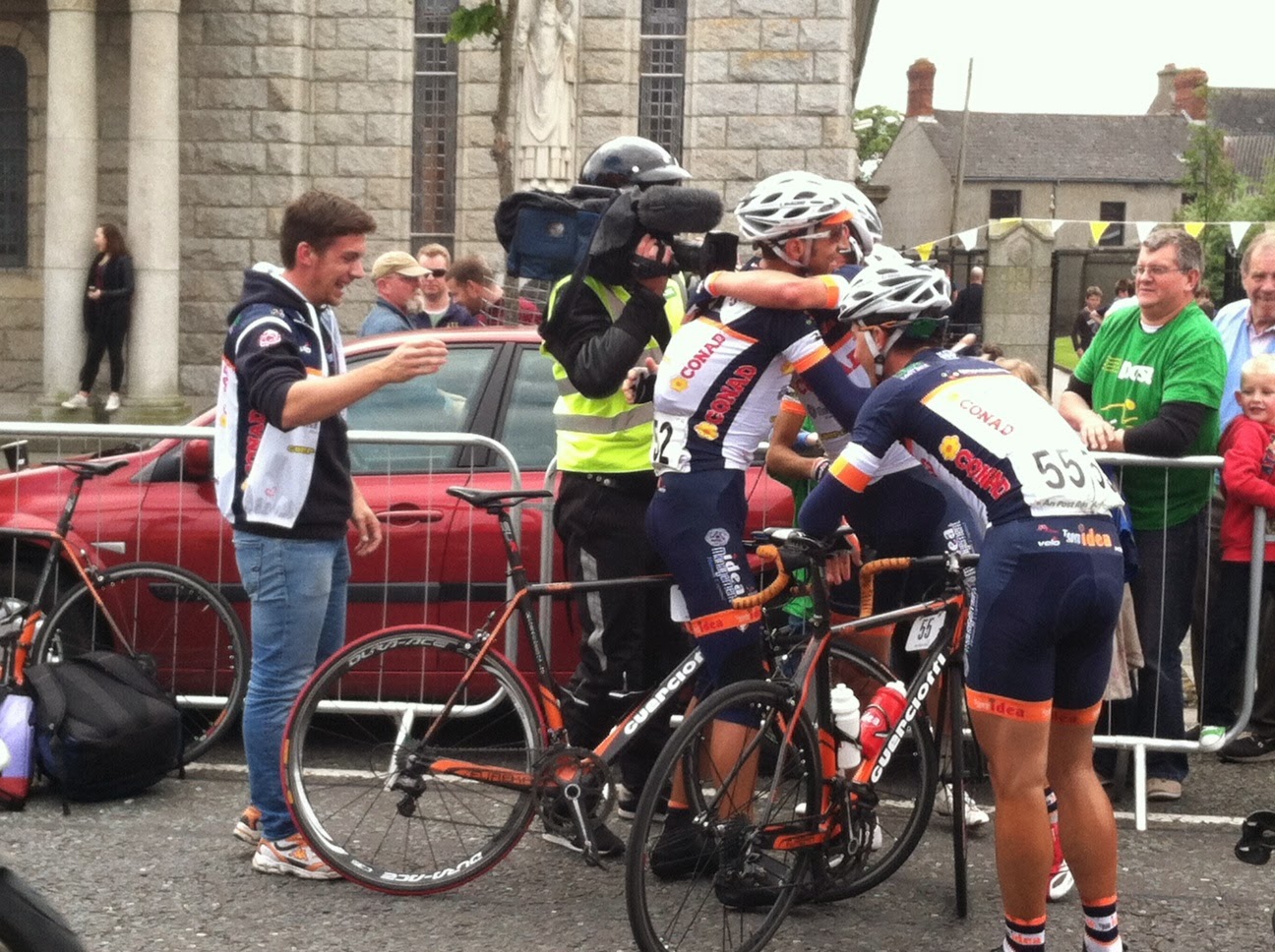 "Molto, molto vento tutti il giorno domani ragazzi. E anche pioggia. Non troppo salita, ma attenzione! Sara molto duro."  A hard day, less mountainous maybe, but into the wind.  And more rain.  Mirko's face gets a little more serious.  He shares our forecast with his buddies.  They seem to doubt the validity of my adjacent Irish meterological sources.
"Davvero."  Really.  They're still not sold.  OK, one more try. Time for the nuclear option. I point over at Paul.

Ma vedi questo uomini qui a vincere due Ras.  Davvero.  '87 and '88.  They perk up as Mirko passes on this fact, leading to an animated Varese dialect-chatter amongst them.  We get a kick out of them.  Nice kids.

I smile to myself and think how 30 or so years ago Paul,  Seamus and Alan all would have been skinny kids in tracksuits in this same hotel.  The world turns. I let Mirko get back to his mates with the standard farewell best wishes you give an Italian rider. You never say 'good luck' to an Italian cyclist.  Instead, just like you'd say 'break a leg' to an actor, in Italia, you wish a corridore luck by bidding him 'into the mouth of the wolf'.

Mirko smiles back a future film star smile, giving me the usual reply of thanks.

Fast forward three days later to Skerries. Our Race the Ras over, Paul and I are hustling back to the finish with watch the arrival of the Ras' final stage.  We get there just in time, and watch the winner ride in on a solo break. No one else in the photo. 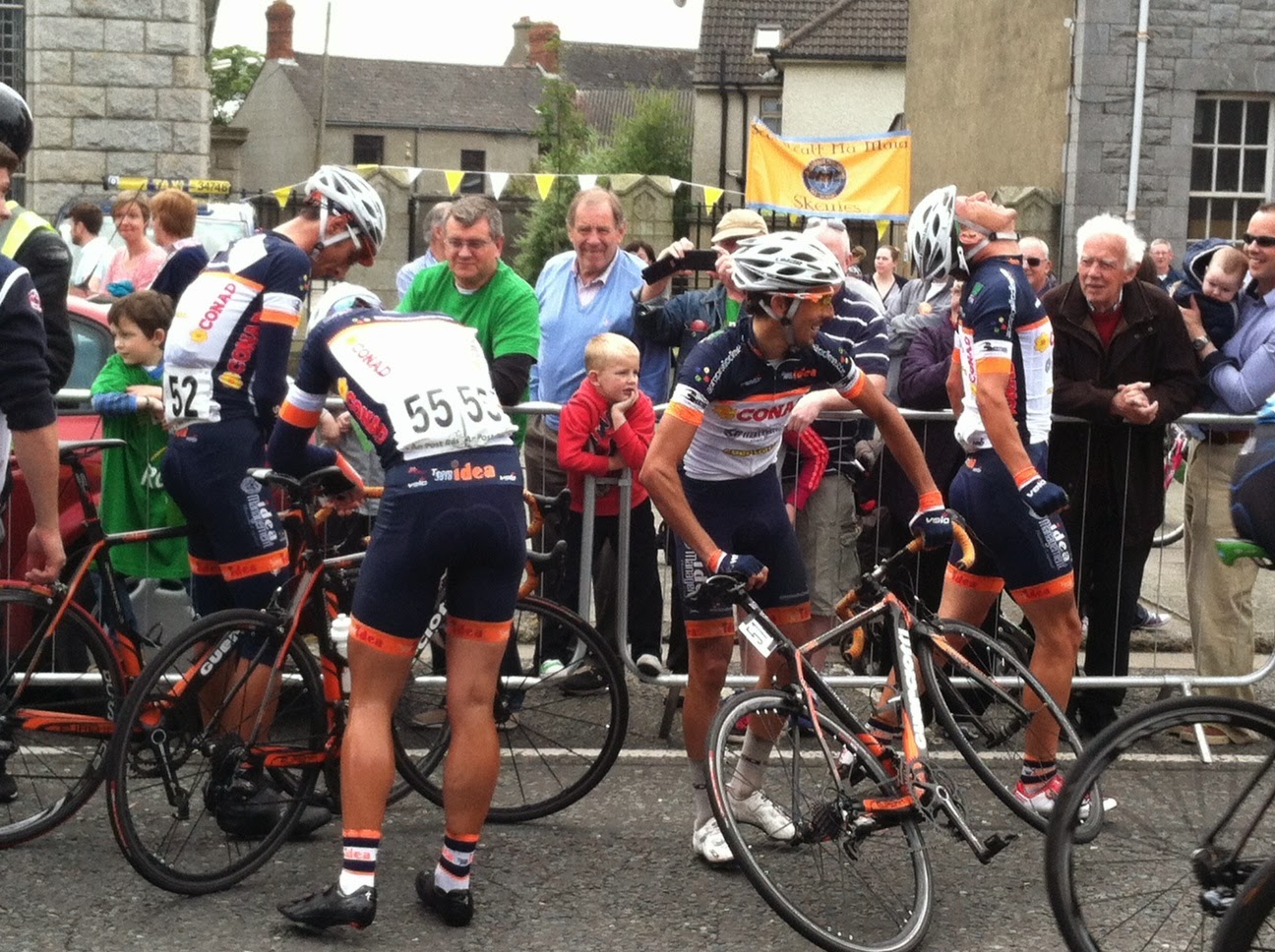 It's one of the Italian kids from the bar that night, Team IDEA 2000's Davide Ballerini.

His victory salute is one of the happiest I've ever seen.  Hands over his face, punching the sky, just an uncontrolled release of incredible ectasy. I remember and miss that feeling.

But the following extended celebration with his team as they cross the line and greet him is even better. For after all, nobody does victory celebrations like the Italians. The whole team just explodes in sheer happiness. 50 meters past the line, the boys are hugging, shouting, exclaming. Ballerini is in tears, they're all beside themselves with sheer joy. And his teammates are just as happy as the winner is.

Mirko? Well he finished 10th overall in the Ras.

It's a fitting final act to bring the curtain down on my Ras, as it gives my often cynical old keltic heart a badly needed shot of positive energy. A little taste of the spontaneous passion that I really believed was long gone from the sport I love, systematically drummed out by commercialism and modernization and go big or die gigantisme.  I've often been critical in this blog of modern cycling, with its marginal gains, radio controlled tactics and media handled riders making passion-less statements as bland and empty as those of our White House press secretary.

In fact I've been so disillusioned by the evolution of modern pro racing that most of you have likeliy noticed I've had little to say on this blog about pro racing this year, instead taking refuge in long hard rides, Ras prep and cycling nostaligia.

But now, watching these so likeable Italian kids devour the wolf as a small yet welcome ray of not-quite Mediterranean sun finally shined down over the Ras' final act in Skerries, I'm reinfused with a similarly small ray of hope for the future of cycling.