May 23, 2011
Cool photo of the French national selection for the Tour de France, 1958.  Those classic jerseys, like flags.  Le Coq Sportif used to make them up for all the Tour teams back in the days when the Tour was contested by national selections.   There's a good story around this one... 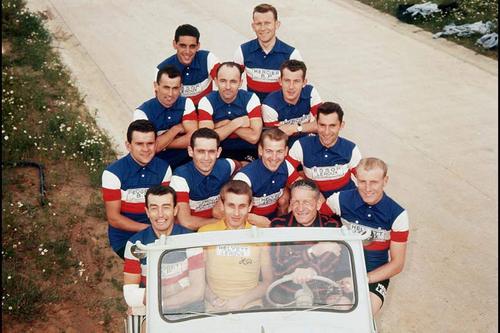 The smiles masque the brouhaha and intrigue that surrounded this selection, for this French national squad's destiny was to be most impacted by the star rider who wasn't in the car.

Who was left off the team?   Tour de France veteran Raphael Geminiani - Bobet's longtime right hand man.  New star on the block Anquetil wouldn't accept two old buddies Bobet and Gem in the same squad, potentially ganging up on him.   One?  "D'accord.  Mais pas les deux."  Not both of them.  So the selection was negotiated, and Gem left out in the cold.

Insulted by the slight but without missing a beat, Gem was quickly installed as leader for the regional Centre-Midi team (left),  and immediately started tweaking the nose of the entire French national team. 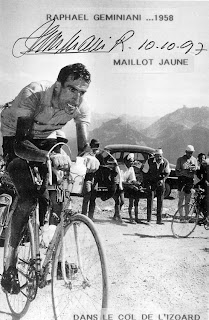 The fun began at the Tour start in Brussels.  A Belgian supporter presented Geminiani with an ass (yes, that's right, a donkey) as a gift.  He paraded the animal around, telling the press he was going to name it 'Marcel'...  "Because he's just like Bidot - stubborn and stupid."   That little prologue kicked off a whole three weeks of Gem entertaining himself by torturing his former teammates.  The press, and public, ate it up.

It wasn't all just trash talk either.  From the start of the Tour, he was in the action, took the Maillot Jaune, and defended it doggedly.  His band of regional underdogs were taking on the national selections of France, Italy and Belgium, and beating them.   After the Tour a la Walkowiak of '56 ,and Anquetil's start to finish domination of the prior year, 1958 was a more competitive and suspenseful Tour vintage, one popular with the public.

And until a few days from the end, it looked like Gem was going to pull off a popular upset.  Into the Alps still in jaune after the stage over the Vars and Izoard and with the worst of the climbing behind him, he went into the final Briancon-Aix Les Bains mountain stage confident, with a 3'47" lead over the Italian, Favero.   Anquetil was at 7' 52".  Bobet over 20 minutes down.

It turned out to be misplaced confidence.

The next day, in a 4-col Chartreuse valley mountain stage in a dante-esque cold driving rain, Charly Gaul danced away to erase a 16 minute defecit, and destroy the field with the kind of recital only he could play.

Anquetil, coughing blood with a bronchial infection, lost 23 minutes.  He retired next day and checked into Hospital where delirious, he spent a nightmarish night dreaming he was chasing a phantom man 'made of rain droplets' 200 meters ahead.  He'd catch up, but this rain man in the image of Gaul would evaporate, only to reappear again 200 meters up the road.

On the road to Aix Les Bains, at first thinking Gaul was too far back to matter, the gap grew, and panic started to set in to the race favorites.  Geminiani realized he needed help to bring back Gaul.  He turned to his old teammate Bobet and the other tricolores, appealing for a dig out.   Bobet just replied:  "C'est ton affaire"  It's your business.

Gem blew big time in the end, losing 14' 35" to the Angel of the Mountains, and with it his Maillot Jaune.    Bobet later said he couldn't help, that he was on the ropes just following.  The three-time former Tour winner lost 19 minutes that day.   A year later he'd abandon his final Tour at the summit of the L'Iseran.

At the end of that historic stage, underdressed with only a soaked Maillot Jaune covered with a transparent plastic rain cape, the exhausted, frozen Geminiani sobbed in the arms of his directeur, Adolphe Deledda.  But he was still screaming away...

"It was too hard, I couldn't do any more, they all wanted to kill me, they all attacked me.  There were too many of them.  It was no longer possible, I cracked... the whole equipe de France was against me.  They're Judases.  All of them... the Judases!"


So in the end, neither French squad won that 1958 Tour.  Little Charly Gaul, riding in the mixed Netherlands/Luxembourg team went on to seal his Tour with a victory the final TT, only wearing the Maillot Jaune once, on the final coronation stage into Paris.  Geminiani finished 3rd.


Gem would go on to direct one of those Tricolor Judases, Jacques Anquetil, to greater glory in his St. Raphael - Geminiani  and Ford France teams during the early 60's.


And what of Marcel Bidot?   Well they brought national teams back for two years in the 1967 and 1968 Tours, and Bidot was put in charge of the Tricolores again.  He won in '67 with Roger Pingeon.  Nice video profile here of the Bidot during the '68 Tour on a stage with great footage of a stage where Pingeon won, while his co-leader Poulidor crashed out, and more retro behind the scenes stuff.