Ten to twelve grand for a race bike?   Utterly ridiculous.  On oh, so many levels.

It got me shaking my thick-mick head, and thinking longingly back to the good ol' days.  The mid '70's, when road racing bicycles were all hand brazed, lugged steel tubing.  Your wheel choice?  Pick 28, 32 or 36 spokes.   Grouppo?  Either Campagnolo Nuovo Record, Super Record or maybe Shimano DuraAce.   There were a lot of bicycle company 'brands' (e.g. frame designers, brazers and assemblers), but the basic ingredients were all about the same really.   Funny thing was, guys still rode 30 mph on them, no problem.    In fact, I think they could handle them a heckuva lot better in a peloton too.

And the best stuff, and by that I mean the bikes and technologies used by top professionals - even by winners of the Tour de France - weren't the luxury goods they've become now.  Their prices were startlingly cheap.   But what would yesterday's pro team bikes cost in today's dollars?   Here's a fun and illuminating archival magazine dig, and quick analysis using an online inflation calculator... 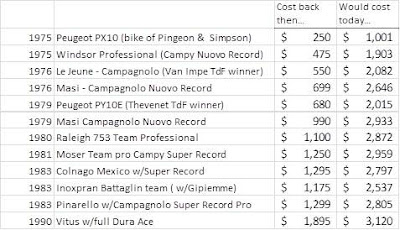 If you take the PX10 'outlier' out of the equation (my first race bike), it seems the sweet-spot present value for a pro-level ride hovered between $2,000 and $3,000.  For quite some time.

It's just in the past few years, flying in the face of global economic crisis, that 'pro team' cycling equipment has rocketed to levels of absurdity.   A $10,000 -$12,000 Halo bike is between 4 to 6 times the cost of Thevenet's, Moser's or Battaglin's grand tour winning rides.   Does this application and transfer of available- albeit high-priced - technology deliver a real competitive advantage to the elite pros it was designed for?

It's a diminishing return on investment if you ask me.   As much as they'd have us believe it, engineers don't win bicycle road races.   Heart does.

I respect engineers.  It's just that I think they should spend their valuable, expensive time figuring out how to make our road and bridges better, and come up with a substitute for nailing power lines to poles that every snowstorm and hurricane takes out.   Just one man's opinion.

Raphael Geminiani said it better, in his new book 'mes quartre verites'.  "I want to pass a message on to the youth...you can still hope to be a champion, even in the age of WiFi, the iphone and the i-pad.   My message is clear.  One isn't born a champion, like one is born rich or poor, white or black.  One becomes one. By work, and only through work."

Not by buying a better bike, Gem.  So is this new technology 'worth' such a premium?   Depends on to whom you're referring to jongen...

Pricing strategy 101:   I once read an interesting article on some research done on consumer shopping behavior using wristwatches.  Two watches were presented to a pool of shopping subjects, bearing two different prices. A pretty low percentage (naturally) chose the more expensive of the two.   But an interesting thing happened when for a second test group, a third, super-high priced watch was added to the line-up.    A much greater percentage of the total 'upgraded' to the middle watch than with the first group.  Marketing types call it the law of the middle choice.  Adding a third luxury item 'pulled' more consumer 'up' to a more expensive item

Hey, what do I know, I'm just a simple caveman.  But I think these stupidly-expensive luxury bikes are there to get more consumers feel like they're actually saving money, by (gladly) spending up to $4,000-$5,000 on that next bike instead of the more prudent $2,000- $3,000 option that's still available, probably more appropriate and frankly, way more than good enough for their ability.

It's a disturbing trend for the cycling as a sport I think.  Increasingly positioning cycling as an 'elite' activity.  It parallels other developments in professional cycling.  I know it has never been the 'real world', but the sport is increasingly moving into an elite bubble.  Literally and figuratively.  With teams formed and supported by private equity benefactors vs. the 'commercial' sponsors ever since Nivea and St. Raphael used pro cycling to sell affordable stuff to normal people.

Today, we've got bike companies playing NASA, supplying teams with bikes that are only really marketable to the '1%'.    A positive development?  Maybe if you're Mike Sinyard at Specialized, or one of the other oligarchs of Chinese carbon-layup.  But I can't help but think it's all become a little bit sick.   Especially when you think about where this sport came from, and what it's really about.

Give me the artisinal.   A Masi working in a tiny shop in the far corner of the Vigorelli Velodrome making frames for Simpson, or Merckx.

Contrast the investment banker (1% in income) buying a 'halo bike' to ride in the PanMass challenge with the story of young teen named Fausto Coppi (1% in ability) dropping the local racing team on his butcher's delivery bike.  Or of flower delivery boy Lucho Herrera doing the same thing in the Colombian Andes.  That jongens, is cycling.    Won by heart, legs and the head.  Not with the pocketbook.  And not with technology.

Road cycling is a sport of the people, (or so they say anyway... I'm starting to wonder).  Let's see how that 4-6X rise in pro level bike prices compares to other things 'normal people'... we 99%... bought over the same time span... 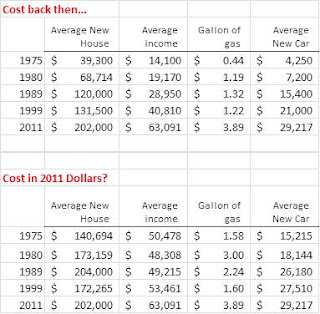 OK, you can probably quibble with the calculation, but I don't see a 4-6X increase in these other items, do you?

Now I many of you cafesupporters who know me, also know I'm a founding member of 'cheap p****s anonymous.'    I admit I still have a dated 10-speed Campy group on my Flandria.  The cranks are not carbon, nor are the bottle cages.  And you know what, it doesn't flippin' matter one iota.

What does matter is the eternal quest to ride the thing longer, higher, faster.

OK, I admit it, I'm a retro grouch.  Maybe an increasingly cantankerous one.   A pal recently labelled me the Andy Rooney of cycling.

Maybe he's right.  I put in over 50 miles on a 42x16 steel winter fixed gear bike this past Saturday.   And you know what, it was great.  Thank you very much.  Didn't go much slower than my race bike either.    Still spanked it along at 18-20mph for three hours.  Halo bike, me arse.

What do you think about 'Halo bikes', cafesupporters?     Weigh in...