March 29, 2012
Sylvain Chavanel has been looking stronger and stronger over the past few weeks.   Today, he just took De Panne with a killer TT.

With the once again seemingly dominant Quick Step classics armada around him, a tricoleur jersey on his back and the frustration of last year's nearly weighing on his mind... I'm thinking maybe this Sunday might finally be his day.

The scenario?  With all eyes on a Tommeke bound in a straight jacket likely strapped tighter than the belts of JetBlue passenger-posse holding down a flipped-out pilot, Patrick Lefevere will play his French ace.

Not that many French riders have won the Ronde van Vlaanderen. 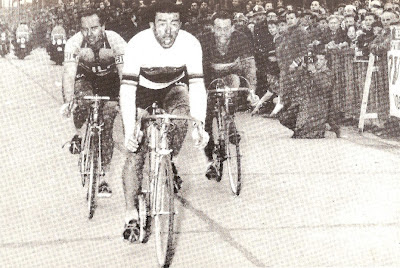 Three to be exact.  Most recently Jacky Durand survived a day-long break to take the Ronde solo in 1992.    Before that, there was Jean Forestier in 1956, now the oldest living winner of the Ronde.  But the year before, 1955 saw Louison Bobet win a battle of giants to become the first French winner.

In fact, Bobet and Forestier remain the only French riders to win both Paris-Roubaix and the Ronde.  Each alternating in taking one of the monuments in 1955 and 1956.

Bobet came to Flanders in 1955 wearing the rainbow jersey of World Champion, and riding for a newly launched super-team.  After years riding for the small regional Stella bicycle brand, Emile Mercier wooed the two-time Tour de France and World champion to switch for '55, with the carrot of launching a second pro team under a new "Louison Bobet" bicycle brand.  Bobet was encouaged that Mercier's hand picked team and stable of classics riders would finally let him be competitive in the spring classics that had escaped his palmares until that point.

In Flanders, Bobet was on his A game.  Approaching the final stages, he was part of a kopgroep that led the dance up the Kloosterstraat in Grammont.

Bobet, mouth wide open, was closely following Bernard Gauthier of his 'sister team,' Mercier.   With 60k still to go, their forcing eventually put them away in a two man break.

Behind, Van Steenbergen and Koblet each fought to contain the damage.

Cue the Three Stooges music, because on the Muur decent, the slapstick comedy ensued.

First, the two French escapees were 'accidentally' sent the wrong way on the descent by a policeman.  (van Steenbergen supporter perhaps?  You decide.)  By the time the French tandem got back on the right route, the desperately chasing two time Ronde winner Rik van Steenbergen, and Swiss pedaleur of charm Hugo Koblet had them in sight, and caught them up after a 12k pursuit.   Four stars together for the finale.

Tactically astute, Bobet knew his breakaway 'quasi-teammate' (they both had the same St. Etienne based paymaster, after all) was perhaps his biggest rival on the day.   The solid Gauthier had been flying all year, finishing 2nd in Milan San Remo a few weeks before, and had just showed his hand in Geraardsbergen.  Also, Bobet was afraid of the rapid Belgian champion van Steenbergen in the sprint.

But Louison Bobet was, as we say in Boston, 'wicked smaahrt'.  So, not having just fallen off the turnip truck, he struck a deal to two kill two birds with one stone.  At 30 mph he rode up beside Gauthier, telling him to keep jumping away.  "If you get the gap, the Ronde is yours... if they bring you back you lead me out in the sprint, d'accord?"   Gauthier grunted his agreement.

Gauthier's launched multiple attacks that drew out Rik's reserves again and again to pull him back.  Even Bobet put one in himself to keep the pressure on.  Then Gauthier again.  Rik was on the ropes, but it was a place he'd been before, famously getting the same treatment from Coppi himself before outsprinting il Campionissimo to win the 1951 Paris Roubaix.   So Rik I just kept his head down and pulled each one back.   Koblet, no longer in the same state of grace he'd enjoyed a few years before, grimly hung in there.

Then with about 10k to go at Wichelen, the break came to a lowered railroad crossing barrier.   Bobet and Koblet jumped over the lowered barrier - something illegal in Belgium!   Naturally, Van Steenbergen followed them.   Rik later said a BVB commissaire drove up and told him, "you've been disqualified."

Trains.  The same kind of incident affected the outcome of Paris-Roubaix a few years ago seeing VanPetegem and Hoste relegated for crossing a lowered barrier.

So just like Freddy Maertens in '77 (a story featured in the March issue of Procycling magazine), the hot Belgian favorite in the winning break was left with the same dilemma mid-race:  Keep riding, or not?   So in addition to the parrying constant attacks, he had that weighing on his mind and morale.

In de spurt, it all worked out as planned for Bobet.  Van Steenbergen was well cooked.  Gauthier led his captain out, surging up a final cobbled hill into the final k, then dropped off with 500 meters to go, tank empty, job done.

Louison Bobet took off like a rocket to become the first Frenchman to win the Ronde, over Hugo Koblet.  The spent van Steenbergen was third.

It will be interesting to see how the new course plays out for de Ronde this Sunday.   And if Chavanel can break what's now become a 20 year French drought.

I don't remember any train crossings between the Paterberg and Oudenaarde, so with any luck it will be a battle like '55.  Only hopefully without the slapstick.