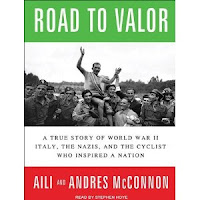 So much has been written about Bartali in the anglo cycling press, but more about his cycling exploits, less about the man.  For me, his character is a lot more interesting.   A new book, Road to Valor, goes deeper into the story of a man who during the World War II risked everything to save Jewish refugees...and who after the war crucified Bobet and Robic in the Alps to literally save all of Italy from the brink of revolution.

Although I thought I knew everything about the Bartali  story, having read many Italian language books and magazines in the past, I found this one to be an excellent, well researched story.  You won't get details on the races, but you will learn read some new insights and facts about the life of Gineattaccio I'd never seen printed anywhere. Hats off the the McConnons, wonderful book.

OK, statement of the obvious:  Catholicism has had some big PR problems in recent years.   I'd like to think that Bartali represents a more positive example of the best of the faithful.   You can't separate Bartali's life, on and off the bike from Catholic themes, either literally or symbolically.   Sure, he always wore his faith on his sleeve, was a personal friend of the Pope who'd walk arm in arm with him -  but his life touched on many other themes, being filled with trials and choices.

Read the book.  See just how much he risked.

I was in the presence of the great man once.   Working the Milan bicycle show, in 1991 if memory serves.  It was autumn, and yellow leaves were falling on the wet roads around a Feria Milano filled with bicycles and motorbikes for that zoo that was the EICMA show.   Walking the massive halls packed with people, I passed the big booth of an Italian supplier, one whose offering was primarliy lower priced department store mountain bikes in neon colors.   Not the big slick marketing show of a Bianchi, Specialized or Colnago.  No, this sparse offering was was just rows of bikes lined up all over the floor.  No marketing, just product.  Pretty old school. Some of these day glow steel utility specials had BARTALI branding on them.   Passing by the name caught my eye.  I stopped and was thinking, "Wow!  Now that's a license who's sell-by date has long past..."

Then I heard 'the voice'.

That gravelly, unmistakable voice.   (hear it yourself below)

It was emenating from an old dude, about 5 foot 7, solid as a barrel of vin santo, and despite his quite advanced age, still quite the force of nature.  He was wearing his overcoat, and talking with some other old guys in suits.  It was Gino Bartali, still workin' the show.   Talking and talking and talking.   Talking like he used to do on in his Hotel room on the Tour or Giro long into the night, keeping awake his tired teammates who just wanted to get some sleep.

He spent so much time during of his last years in public, just 'being Gino Bartali.'  Even well into his 80's,, he was paid to do appearances for Sprite, Club 88, working the Giro.

It kinda took me aback at the time:  This man whose exploits helped save his nation from revolution, and whose anonymous good works saved some of the faceless forgotten was still working hard for his money.  The cruel reality of professional cycling, particularly  is that many ex-champions don't make enough to retire comfortably.  They have to keep hustling.   1982 Coors Classic winner and  Tour de France king of mountains jersey wearer Jose Patricinio Jimenez still drives a taxicab in Medellin.   Vuelta winner Eric Caritoux is out working his family vineyard in the shadow of the Ventoux.  And Bartali did appearances into his 80s.

- the final scene in 'Gladiator'

After Bartali passed away a dozen years ago, I convinced a group of cyclosportive friends to do our own, small, tongue-in-cheek pilgrimage ride to remember Gino Bartali.   It involved a group of five 40-something, mostly out of shape businessmen.  Guys with a lot of intended miles, but precious few real ones in our legs.   Some screen printed yellow Biemme jerseys.  A rented RV, filled with Beer.   And an autumn escape west on the Mass Pike to assault the highest climb in Massachusetts, Mount Greylock.   OK, so it wasn't the Izoard, but for us, that year, it might as well have been.   To beat back middle age, some boys go to Vegas.  Some ride up mountains.   That's just the way it is.

As none of us were prepared, we christened our little impromptu squadra 'G.S. Piano'.   (As in Piano boys, Piano!!)  Our jersey was a yellow replica of the old Bartali team jersey.  Low budget, high yuks.

That saturday morning climb up Greylock ended up being a grovel in a cold October rain, a fitting homage to the Alpine stage in '48 that saw Gino seal his 2nd Tour.    I've no doubt that Gino was up there laughing at us.  But I know his Tuscan spirit animated the post ride festa at a great Italian restaurant in Williamstown.   Our squadra's own wine professional Nick leveraged his metier as one of New England's preeminent experts in all things vino, making sure the bottles of rosso were perfect.   Lot of talking, talking, talking.  Nice memory. 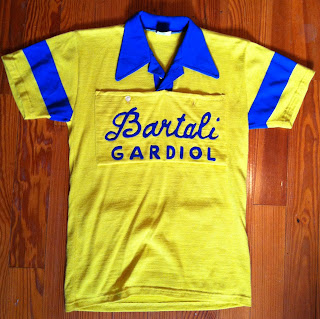 Being the total Bartali fanatic, I finally snagged myself a real wool replica Bartali jersey a few years ago.  It's a rare one, made by Santini for the film Il Grande Fausto.   Few were made.

Someday I hope to wear it in the Eroica, but I'm afraid if I ride Gino's strada biancha, and drink the local Chianti, they might have a hard time getting me back on the plane.  Or that my voice might get gravelly and never come back.

What am I saying...then again... I'd miss the cold rain, winter rides and veldridjen.   Would be a nice trip though...

While we're talking good books and Tuscany, last summer I read a book by a Hungarian born, American raised Ference Mate, a guy who moved to Tuscany and started a vineyard.

That read is called 'the Wisdom of Tuscany', and it makes a pretty compelling case for why the Tuscan lifestyle is superior, and offers suggestions as to how we might all partake in our share of it, no matter where we live.

Mate's thesis cites multiple factors:  Family orientation, small town rural living, attachment to the soil, orientation toward artisinal pursuits, the omnipresent family business, incredible thrift, socially oriented childhoods not dominated by technological gadgets, a practical DIY orientation and of course, those pillars of tradition and faith...  It's a good read.   And a better life philosophy, I think.  I was sold.  (Just don't tell my wife, or she'll call me on it and expect me to trade time cycling for gardening...)

It's the perfect accompaniment to the Road to Valor.  Enjoy them both cafesupporters.
w