- Father flahute nursery rhyme.  Legend has it written on a cafe wall in Eeklo, but it might be Moorslede.

Today should have been the kind of day cycling fans wait for all year.   The battle over the Gavia and the Stelvio.

Instead, it's a massive disappointment.   Massive.

Blame the weather?  Climate change?   Not me jongen.   I'm blaming the collective caste of dopes that manage professional cycling.

It's official.  They're all completely full of shite.   While UCI leadership this week applauds itself for doing a 'great job managing cycling', their management policies and decisions are precisely the reason why the world's wielerfans are sulking over their wheatabix this morning.   Well, you can largely thank Verbruggen, McQuaid and a complicit RCS for this year's Giro-as-ice-station-zebra.

The fact is, by artificially manipulating the traditional pro cycling calendar - and progressively moving the Giro to a much earlier calendar dates since 2000 or so - the UCI - and the RCS by their googy eyed globalization mirage acquiescence, have taken what should have been perhaps the peak summit of the professional cycling season...put all the chips on 7, and spun the meteo-roulette wheel.

Some historical perspective from a cranky old guy for you cycling management morons:  Between 1947 and 2000 the Giro's traditional calendar slot fell somewhere between.. roughly eyeballing the average dates of my crude put-together-in-15-minutes-of-research-infographic below... from May 17 - June 9.    This year the race was scheduled to end on May 26.    Safe to call it a two week shift - earlier from tradition. 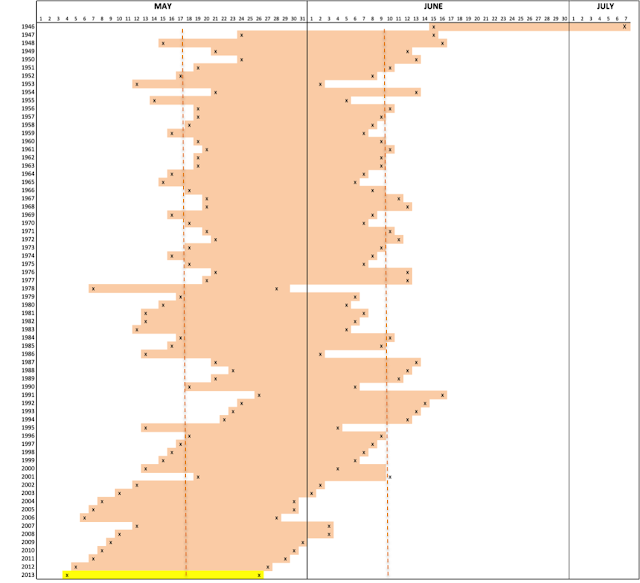 Now here's some more logic for cycling's brain trust:   I'll type slowly so you can follow and understand.  The Dolomites and Alps are usually in the last week of the Giro... which traditionally was well into June.    This year?  Huh?  Hey wait, there's still another week of May to go!   Two weeks' difference = that much lower chance of cold and snow in the mountains, jongen.

So go ahead Pat, keep waving around that inane Deloitte 'stakeholders report' propaganda piece like Moses coming down from the mountain with tablets.  Keep telling us "Cycling has an extremely bright future" and what fantastic progress you're making.  And why restructuring the pro cycling calendar is a top 6 priority.

How's that restructuring working out for ya now Pat?

And go ahead, Mr. Michele Acquarone.   Tell us again how under your stewardship the Giro is becoming a global brand.  How it so needs to reach out beyond Italy in scope.   How by adopting an English slogan ("Fight for Pink") you've become more viable, more valuable, and so much more relevant to a global audience.   Go ahead, keep tinkering with this cycling sporting monument like a toy.

While I applaud you for reaching out to fans in your research, I question your interpretation of the findings.  The fallacy of market research is that the data is very often mis-interpreted, leading to disastrous actions and unintended consequences.

And - speaking marketer to marketer - 'tinkering' with a proven, popular product formulation is the biggest fatal error in the brand and business management handbook.   Ask the (ex) President of JC Penney.  He drove that retail chain onto the rocks by trying to attract a new customer, and ignoring his core customer.    Hey... isn't that's kind of just like what you're doing now?  Chasing new markets while your 'product' increasingly disappoints core, traditional supporters?

Example:  I'm an Irish-American, but I shudder at seeing the Giro slogan in English.   We stranieri love the Giro because it's uniquely and completely, 100% Italian.   It's the Giro d'Italia.  Not Dublin or Belfast.  Make the pilgrims go to to Mecca, Michele.

This is part where Vincenzo Torriani (or Cher) comes back down and gives you a slap.   Snap out of it.  Stop the anglophone madness, please.

And tell us again Michele how (quote)  ‘I prefer to eat a smaller slice of a bigger cake.’ We need to understand how the cake can become bigger for everyone.”  I think you should be on a crossroad out of Alto Aldige today.  Try repeating that pap to the legions of disappointed tifosi driving their camper vans home.

If you said it to me, I'd respectfully reply that as a supposed businessman (not cycling guy) you should be ashamed of yourself.   That statement confirms that you don't really understand the principles of marketing strategy, positioning, nor Il Giro's place in the pro property pecking order.  That would be 2nd, by the way.  Behind ASO,  the market leader.

'Growing the pie / growing the market size' is a strategy only effective for the market leader.   The Giro is not the leader of the pro cycling market.   It's in P2.   Conversely you should deploy a flanking or niche positioning strategy to solidify that 2nd position, and increase value in your franchise that way.

You do this by becoming more Italian.   By controlling your own destiny, come hell or high water.   And by holding the race when it's best for the Giro, not playing along with a newly contrived global cabal that's playing you for a chump, convinced it would be in your greater interest to shift your race two weeks earlier than it ought to be...

Oh, I know my outrage, no matter how logical, is so easily be positioned as the radical view of a old retro-tifosi outlier.  I'm the cycling equivalent of a conservative tea party member.  "They're all radicals."   Yeah, sure.

And I'm sure the great unwashed and casual cycling fan will wring their hands and accept that this weekend's party cancellation is the fault of greenhouse gas emissions and too many plastic bottles.   And that the UCI and RCS will go with that spin, and explain it as an atypical weather event beyond anyone's control.   (That's right...it's all our own fault!!).

But not me.   I think those that run major businesses like the Giro ought to be smart enough to realize the folly of shifting a sporting event held over 2000 meter + Alpine passes to a slot two weeks earlier into the spring.  They should have known they were playing with fire and would get burned badly sooner rather than later.   For all the polished PR-speak, I swear, there's so little common sense.

Well, here's two words of the day to add to your business speak repertoire:   Risk mitigation.
Managers of major events are responsible for taking prudent steps to minimize the possibility of catastrophic events affecting their event.

But careful Pat, Michele:  Don't misinterpret that message and jump to the wrong conclusion.    Please don't start telling us in your post-mortem that the Stelvio and Gavia are too risky to include in a 'modern' Giro anymore.    That would be another misinterpretation of 'customer feedback'.  You guys seem to do that a lot.

So I'll put it in plain English, seeing as that's now in vogue at the Giro.

Schedule the event back where it used to be.  And keep the Gavia and Stelvio in.  Frequently.

And don't go blaming the weather for ruining the Giro grande finale.

Blame your own blind stupidity, and poor management.