Just what is it about animals and bike races anyway?

Whether it's that sheep-in-the-road incident in this year's Tour, chezzy-cliche helicopter panning shots of a horse running alongside the peloton, or that unsuccessful slapstick attempt to corral a stray dog in a Giro finish straight (memorialized on film in The Greatest Show on Earth here) -- our four-legged friends can always be counted on to provide some of the more comical moments in bicycle racing.

I mean, just look at the cute shot of Toto leading Milan San Remo.  You can bet your last GU shot that LeBron James and Lionel Messi would never have to deal with that! 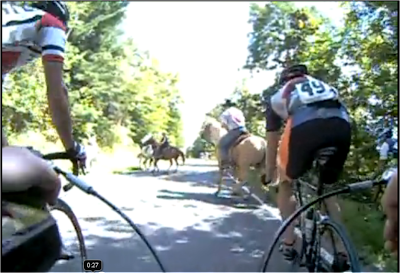 Well, cafe supporters - here's a new one that beats all prior entries for pure comedy value.

Check out the video here sent to me today by my pal Francis the Flahute - who rides with Threshhold cycling out of Boston.

This zany video was taken with an on-bike camera during the recent Cat 4 race at the Tour of Catskills.   It's destined to be a classic.  Flandria cafe gives it four lions.