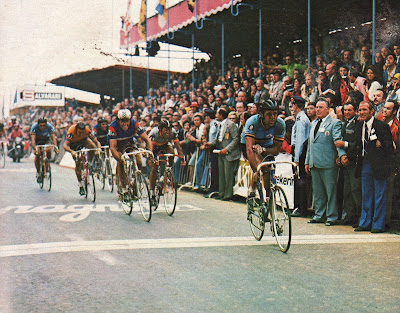 The day Roger DeVlaeminck let his best chance to win a rainbow disappear up the road with Hennie Kuiper.  The Belgians were all too worried about each other - Eddy marking Roger marking Freddy marking Eddy.   A zero sum game.  And the perfect setup for the opportunist late attack that was Kuiper's trademark.  Go ahead, look up 'late flyer' in the dictionary.  It should be accompanied by a picture of Hennie Kuiper.

Roger?  That day he was best of the rest.  Small consolation, he's not too happy about his silver, judging by the photo.   I bet it still pisses him off.  In the mid 70's, when Flemish domination was expected, losing a rainbow battle in their own backyard was tougher to swallow than warm Rodenbach.

Hennie Kuiper took that rainbow jersey back over the border to Holland.

Kuiper - now there's a guy who is totally underrated, I dare say almost forgotten nowadays.  He may not have accumulated the longest list of wins, but Hennie always had an ability to rise to the occasion on the really big days.

Olympic Gold Medalist in 1972 in Munich (check it out here).  World Champion 1975.  2nd in the '77 and '80 Tours de France.   Oh, and also winner of Milan San Remo (here), Tour of Flanders, Tour of Lombardy and Paris Roubaix (here).   A great palmares.  Can you name somebody racing now with one as stellar?

In his prime, no one was stronger.  First up Alpe d'Huez in the '77 Tour (here).   In the '80 Tour they had a killer 253km stage over cobbles to Lille in the pouring rain (check out Kuipers soloed cobble break in the rain and the finish) on a course through Hell that made this year's cobbled stage, and some editions of Paris-Roubaix look like kid stuff.   Hinault and Kuiper broke away and slayed everyone, winning by minutes.  They went so hard, Hinault injured his knee having to abandon later.  That day Kuiper was 2nd as was often the case when he arrived with others.  His big wins were always solo - no one else in the photo.

Sunday's Worlds 'down under' could see a similar replay between two champions... one a favorite with the weight of Belgium's expectations on his back (Phillipe Gilbert) against an old crafty one who like Kuiper is known for uncorking the big one on big days (Oscar Freire).