The war was over.   Breton climber Jean Robic, a tiny 5' 3" (161cm) man with an enormous heart, started as a favorite only in his own mind.

This rider they also called Tete de Cuir - 'leatherhead' for his use of a leather crash hat at a time when caps were de-rigeur, was notorious for his verbose bragging.  Understandable, for he'd often been told he'd didn't have the stuff to be a pro.    He wasn't popular in the peloton.   But he was doggedly stubborn, brash and loud.  Le biquet they called him:  The kid goat.   "Blaaaaatttt".

He was a scrapper though, and you've got to love a scrapper.  The only one to hang with Coppi on Alpe d'Huez in 1952..for awhile anyway. 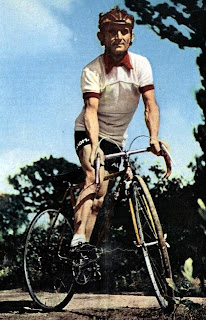 Robic was the cycling style equivalent to the Czech Olympic track champion Emil Zatopek, who someone said "ran like man who had just been stabbed in the heart."  Robic was all head lolling, grimaces, the whole nine yards.  He'd climb wrestling all over the bike, throwing his body back an forth over giant gears en danseuse. He'd crash a lot too.  Burst into tears of frustration.   The anti-Indurain, Robic put his soul into it.  Watching footage of Robic, he always looked like he was going to drop any second.   Here he is having a bad day behind Coppi on the way to Sestrieres in 1952.

That whole 1947 Tour, Robic stayed close to the leaders.  Never in jaune.  Super in the Pyrenees.  On the final day, on the aptly named Cote de Bonsecours -- the hill of 'good help' - on the way from Rouen to Paris, he rode away from the GC leader, Italian Pierre Brambilla, to snag the first Post-War Tour de France in the final hours, on the final day.  His first Maillot Jaune was presented in the Parc des Princes.

Despite riding that Tour in the white and red jersey of the regional Brittany selection (it's said the French national team selectors and other riders never cared much for the brash Robic, only reluctantly selecting him due to pubic pressure after his victory), Le Biquet give France a lot to cheer about that year two summers after the war ended.  Especially sweet, as it was a victory over an Italian.  After all, France still had not forgotten whose side Italy had taken in the war. 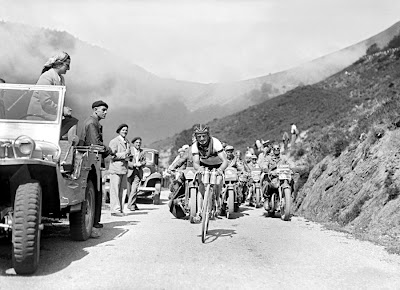 The man who accompanied Robic on that famous break was Edouard Fachleitner.   He was the Berger of Manosque, who lived in that magnificent Provencal town.   It's a truly fantastic place right out of a Peter Mayle novel.  My great old friend Derrick Coetzer also lives in Manosque, and I recall one time during a super outdoor restaurant dinner on a hill overlooking this magical town, when Derrick pointed across the hill to the valley at 'the big place where Fachleitner had lived'. 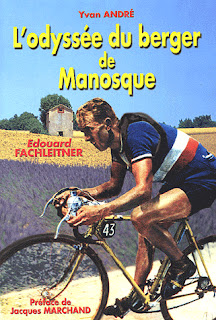 That was the rumor.  Riding as best placed on the French national tricolores after team and former race leader Rene Vietto came apart in the TT, Fach had started the final stage in 5th place, 4 minutes behind Robic who was 3rd on GC.   Once they'd dumped Brambilla and established the break, Fach got coy and stopped working.

Robic turned to him and said, "Listen, you can't win the Tour, because I won't let you escape, I'm too strong.  But if you ride with me, I will pay you 100.000 Francs"  So the freight train rouleur Fach put his head down, did his share, and little Jean Robic won the Tour de France.

After losing the jersey on the last day of the Tour, Brambilla went back to Italy and buried his bike in his garden.  The story I'd heard was that a journalist at the time questioned to him why, and he replied somewhat sarcasticallly that "it was to grow bamboo for a new pair of wheels'.

"Good thing you didn't plant your feeding bottles then," the journalist snapped right back, "Otherwise, you'd have grown a pharmacy!"

Check out the great video here from INA of Robic and Brambilla commemorating that same final stage in 1976.  You've got to love the mouth on Robic, it moves as fast as his legs.    Another INA newsreel on that '47 tour here, and the last tour stages here.     And a 1981 French TV commorative profile below:


Dave Moulton's blog has a great article about Robic here.

Jean Robic sadly died in a car crash in 1980 at only 59, coming back from an invitational veterans race.

As this Tour starts off Saturday, and spends the first week in his native Bretagne - a keltic land that's the heart of French cycling culture - have some crepes and cider as you watch the Tour, remember Jean Robic, and root for some scrappy little dog who knows in his heart he's a big one, and perhaps will come out of nowhere to make this Tour great in the best Robic-Chiapucci-Fuente tradition.