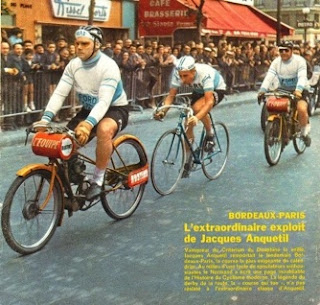 This story starts, like most good tales do, in a pub, over beers, with some blarney between two Paddys.

It was last Wednesday after the Ninigret Crit, and Keith "Coppi" Kelly, after riding off the front for most of that event, was trying to figure out how he could logistically get to the Housatonic road race on Sunday, after flying back into Boston late Saturday evening from a promotional commitment in Chicago.

Joe Savic and I tried to convince him that he needed to make it to this race that would surely suit his characteristics. 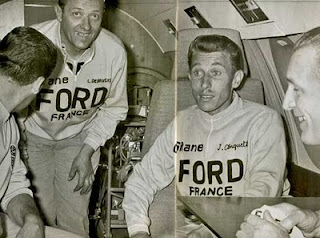 "Bah!  Sleep?" I teased him, "is totally overrated."     And then I proceeded to bait my mate with the long-winded tale of the greatest sleep deprived performance in cycling history.

I'm talking about Jacques Anquetil's 'double' in 1965:  When he won a hard fought 8-day Dauphine Libere stage race over Raymond Poulidor on a Saturday afternoon, then he and his Ford-France team directeur Raphael Geminiani jumped into a private jet - provided by none other that President Charles DeGaulle - to fly to Bordeaux and take on one of the greatest (now sadly lost) classics of them all:  Bordeaux-Paris.

The classic 560km marathon from another age started in the middle of night at 2am.   Anquetil, wired after the race, and the following planes-automobiles transfer - had dinner, a few beers, a massage, and about an hour's sleep...maybe.   He basically took the start at the end of one super long high stress day...with the foreboding of an even longer, harder one ahead.   It was pure folly, and reality was starting to sink in.

It really sunk in as he pedaled in the middle of a pack huddled in cold, dark and rain, wrapped heavy training clothes and a wool cap.   There's no glamour, no bravado on back roads in the rain and dark at 3:30am.   Just tiredness, and doubt.

At the prearranged dawn point where the riders would all would stop to change clothes and prepare for the motorpaced finale to Paris, Anquetil was set on abandoning.  He collapsed into the back seat of the team car, and had the mechanic put his bike on the roof rack.    Geminiani, who'd built this stunt up a the centerpiece of his champion's season - a year he was planning to bypass the Tour -  was at wits end, out of ideas.   He had coaxed Anquetil into taking on this 'impossible' exploit, even getting Jacques' wife Janine to help goad him into agreeing to attempt the double by having her tell him "No, my dear, I don't think you can do it".

Now, in the cold dawn, as sleep deprived reality sank in, this impossible exploit was suddenly seeming just that.

So Gem famously played one last hand:  He gently told Anquetil, "Okay, Jacques I understand.  But I only ask that you shake my hand now, because it will be for the last time.  Because after today it's goodbye, for I can't stand to hang around with a pansy."


At that, Anquetil went beserk, screamed for his bike back, and got on, and on the way to Paris.

And the rest, was history.  Eventually he rode through the fatigue, and saw off former winner Tom Simpson through tag team attacks with his teammate, the French champion Jean Stablinski.   Finally, Anquetil ground away alone on the hills of the Chartreuse valley, to solo into the Parc des Princes in glory.    Check out the video.  I especially love Geminani's eyes rolled to heaven description of that attack.  "It was so beautiful." 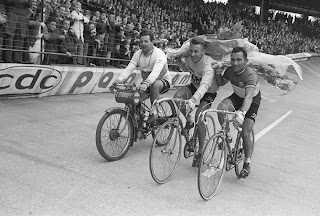 Paris' Parc des Princes velodrome is sadly long gone now, its pink cement demolished in 1967 to make way for the Peripherique highway that now rings Paris.  In those days, Le Parc was the finish venue for the Tour de France.   And twice before Anquetil has arrived only to hear a chorus of boos and whistles from his countrymen... either for being perceived as letting petty rivalry prevent a French win (in 1959 when he and Riviere conspired to favor Bahamontes over Henri Anglade), or for being seen as boring (when his and the L'Equire tricolores dominance was so great, it disappointed a French public expecting exploit and suffering in 1961).

But on May 31, 1965, in the twilight of his career, the Parisian crowd went crazy, in a frenzy over an incredible exploit in courage and sleep deprivation that still boggles the mind.   I often think about it when I'm really, really tired.

After telling this story.  Kel was trying to figure a way to get to Housatonic Sunday morning.   It seems he did.  Here's his email from this morning:

"Sleep is indeed overrated Bro.  It was not nearly Anquetil-esque, but I got in from Chicago at 10:55pm. Hit the bed at midnight, maybe fell asleep by 1am and got up at 4:45 for the three hour drive from Brookline to Southbury. Got there 50 minutes before the race, registered, bathroom, change, straight to staging and got the win in the Cat.3 race.  Only thing missing from the day was more Flandria Jerseys. This was a great race and I would  recommend it next year. Hills and more Hills."

I beg to differ Kel.  It was Anquetil-esque.

He won Housatonic by 2:36, uomo solo al commando, as is becoming his habit, as he rockets up through the categories.

For this performance, you've just won the Flandria Cafe 2011 Maitre Jacques award.   Your prize is a bottle of Champagne, to be consumed in venue TBD (along with the committee heads).

I'm a little ashamed to report I spent this past Sunday with my family as a civilian, in an extended Father's day celebration which included a hard 50k tempo ride in and around beautiful Newport RI, with some motorpacing behind tourists on ocean drive (which felt good after 100k of hard riding the day before with my Flandria mates).  Then a beach day with my wife and son and friends, and a great seafood dinner on a deck overlooking Bristol harbor.

Jacques Anquetil liked his seafood and wine too, so I'll console myself with the belief that my day's activities would have met the approval of Maitre Jacques.

Although surely not as much approval as Kel's ride would have earned.