Over here, we unfortunately don't have the cyclosportives or gran fondo's they're lucky to have almost every weekend in Europe.  Most weekends it's either a race (often a short criterium)... or a century ride which while nice usually has a flavor more 'LAW-touring' than 'TDF-sportive.'

But the Berkshire Cycling Association's Greylock century in western Massachusetts stands apart from your typical century ride, featuring a sawtooth profile that rivals some of the big Euro cyclosportives.  It's a course altitude profile that would garner respect in a Tour de France roadbook.   At 100 miles and 9300 feet of climbing, I figured it was an opportunity to get some climbing in, and recon the East Hawley road climb that will be the prime obstacle in the Tour of the Hilltowns race in two weeks.

I was fortunate to be accompanied on this quest for 'maximum VAM' by three real veterans who are experienced col-hunting warriors.   Tom is a tall, long legged watt-monster who's done a lot of Tour de France climbs over the years and has L'Etape du Tour finishing cred in his palmares.  Maarten is a similarly tall, Dutch-born lanky climbing machine with Nove Colli and Paris-Roubaix cyclo experiences under his belt among others.      And then there was Eric "De Goose':  Cat 2, old CCB teammate, and close friend from way back, just recently making a comeback to the master's peloton.   His reference?   Winning 2-up TT's paired with a teenaged kid named Tyler Hamilton.   Go look up pain cave in the dictionary.  There's a picture of the Goose.

All three had just completed the 150 mile Harpoon B2B ride.

And yours truly, a bald ex-sprinter who fancies himself reborn as a 'grimpeur' in later life...

Friday evening's rendezvous over Tapas and Beer in Pittsfield was a great way to fuel up.  It was shrimp, paella valenciana, and local craft IPA.   A little too much beer perhaps, but the craic was good, the Friday night guitar music wasn't quite loud enough to drown out some good bench racing tales.

Saturday am was beautiful and sunny in the 70's.   We hit the start at 7:30 and rolled along toward the first obstacle of the day, Mt. Greylock.

Right away, something wasn't right.  De Goose was pushing the pace a little bit.   Every little false flat felt like the Tourmalet.  I was sweating like a stuck pig, drops literally pouring off my face.   Uh oh.   The others guys were holding the tempo easy it seemed.  I felt like Mark Cavendish does on the climbs, hanging on.  Too early for that.  Not good. 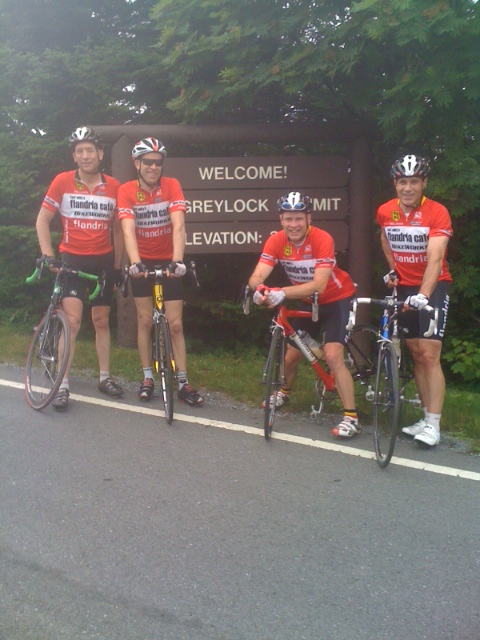 Greylock came soon, and on the early grades I couldn't hold them, losing contact on the steep bit just past the toll house.  I was frustrated watching my 3 Flandria mates grind away.   Unfortunately not unfamiliar though.  I just concentrated on holding the highest tempo I could sustain, was consoled by passing a lot of other riders, and finally got up to the summit about 3 or 4 minutes behind the guys, just in time for the obligatory team photo.  I was not happy with myself.   It was weird, I couldn't get my pulse up much over 160, was hyperventilating like a one-stroke motor, and clearly not getting enough oxygen processed.

Eric suggested it was probably the TimeTrial  I did Thursday night, that I probably hadn't recovered.   Maybe, but I think it the beer didn't help.  Anyway, I was clearly having an 'off' day.  But hey, no excuses, and nothing to do but not overthink it and take the climbs one at a time, enjoy the ride as much as possible.

Atop Greylock, the highest point in Massachusetts, the weather was a little foggy with a cold breeze, so not wanting to risk a chill, we didn't stay long at the feed stop and instead hit the serpentine but recently repaved descent down the north side on roads still wet from rain the night before.   Eric led the Flandria train down.  I was just on his wheel.  It was a nice ride down, flying pretty fast.

Now trying to stay on Fast Eddy's wheel on a mountain descent is not for the nervous.   One time, coming down the Madonna di Ghisallo, our own Dr. Brad hit the deck just behind me sliding out on a tricky hairpin.  Yesterday was an instant replay, as I heard that familiar scraping sound of the rider behind me hitting the deck on a left hand 180 degree virage. I glanced back to see Maarten getting up off the deck.   He'd slid out and luckily escaped with only a nasty scrape/gash on his thigh, but like the tough nederlander he is, just got right back on and said, "OK, let's go boys!"

Then it was immediately back up Rt. 2 through the right hand hairpin to the Whitcomb summit, the top of the Mohawk trail above North Adams. This is a really nice steady climb.   I was riding up ok, but again frustratingly couldn't seem to get the heart rate to rev up to its usual climbing tempo.  Pity, this would have been a good one.   This time, I got up about a minute behind the guys.   A little bit better, but still crap based on the speed of two young riders who motored by me near the top.

You've gotta love a descent with a sign that says "Bear Crossing".    The 12 tooth cog was spun out as we flew down Rt. 2 toward the right-hander in Charlemont that takes you up East Hawley Road, advertised as the toughest climb on the ride.

They were right.   The climb had an irregular grade, with some really steep pitches that seemed well over 10%, and seemed interminible.. about 4 miles total.   My prayers to St. Charly patron saint of Grimpeurs for oxygen and power went unheard.   I was left to grovel alone.   For some sections 39x26 was a little big, and I was standing in survival mode.  I think on a better day, a 26 would have been ok, but it was a long steep one.   Racing up this should be a massacre in a few weeks. I'm a little afraid, but glad I know now what's coming.

The lunch stop at the top was an opportunity to chat with some of the other guys participating.  The ride seemed to draw a fair crowd from Connecticut, New York and Boston. 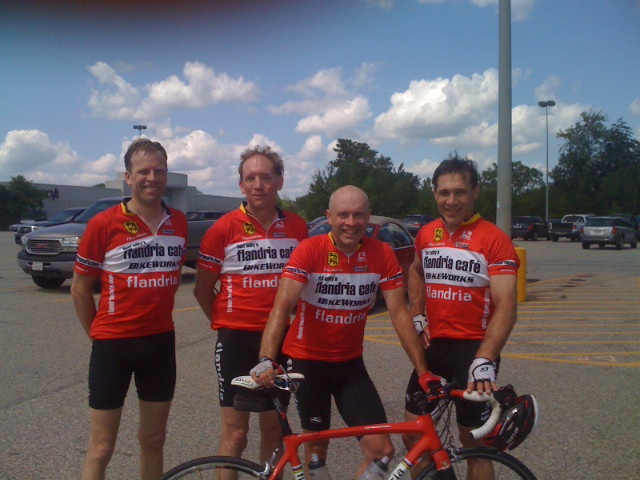 Even though in the first 55 miles we'd taken in three big climbs, the suffering wasn't over.  The second half of the ride was endlessly undulating.  It seemed you were either going 8-12mph, or 35-41mph, very little time in between.   A really tough ride.   Surprisingly, as the day went on, my legs started coming around, although I still couldn't get my heart rate much over 153 no matter how hard I rode.  I started trading pulls, and was doing a better job hanging with my mates on the climbs for longer.

Both Tom and Maarten were both incredibly strong all day.  Tom is super smooth, a strong climber whose long legs apply leverage to turn big gears.   He was strong all day, seemed to get stronger the longer the ride lasted, and really motored us along on the final 20 miles with some really impressive pulls.  The final 10 were mostly all downhill.  Mostly nearly 30mph.   It was like the finale of a classic, as we motored all the way the finish where Eric took the final town line sign a few hundred yards from the start/finish point.  Not to be outdone, Maarten and Tom sprinted up the final 300m rise to the parking lot.  Grimpeurs.

In the end Eric's Garmin showed 6:11 of ride time, 9,314 feet of climbing for 100 miles.  All in all, a totally enjoyable death march, if there can be such a thing.  Those guys were great mates on a great day. I was pretty annoyed at my climbing abilty yesterday, but was consoled a little by how I seemed to feel better at the end of 6 hours than I did at the start.

Hawley hill? The rematch is on in two weeks.   No Beer!  And no Pain!