Last night did my first bike race in over a month, the NBX cyclocross 'under the lights' series.  Great training series that represents (to me anyway) the soul of New England cyclocross.   The bikes and gear may be more professional now, but the atmosphere is identical to what I recall back in the early 80's:  Informal, friendly, enthusiastic.  And above all, fun.

The photos on this post are from back in the day, taken at Plymouth and Wompatuck cyclocrosses back in '83.  I was already into my 4th season of cross back then, a seasoned veteran at 23!

Plymouth is not only the rock upon which the Commonwealth of Massachusetts was built, it's also provided a cornerstone for what's spawned what's now a vibrant New England cross culture.

For example, last night, for an hour before the NBX training race, ex-pro and still-rapid Mark McCormack gave a cross clinic to a dozen or so  veldrijden rewbies.   I couldn't help but compare this scene to that memoriesof similar training clinic sessions back in Mark's hometown of Plymouth Mass. way back in the early '80's, where his mentor Bill Sykes and our region''s first cross star Paul Curley would lead a dozen or so of us through activities like 'cross madisons',  (Yes, 2 man teams with handslings.. try it sometime, it's fun) and one lap timed TT's on the then newly-created Plymouth High School course - a technically challenging circuit that would host the US cross nationals later that year, and again a few years later while covered in ice on a polar post-Thanksgiving weekend.

The circle turns.  Mark unselfishly giving back to a sport he, and his neighbors have done a lot to help popularize around here.
While Mark imparted wisdom money can't buy, several volunteers marked out a serpentine, fast course around a the park with small orange flags.  A ritual common in Belgie,  but here the evening baseball game around which the course wound left no doubt that you were in the heart of New England.   Cyclocross, yankee style.

NBX is a good training course.  Almost all riding, fast grass, dirt paths and some roots.   Just two dismounts over double barriers.   A tricky off-camber hill traverse followed by a tricky fall away reverse banking turn.   And a verdomme  180 left onto some rising gravel that I never seem to get right.   Not super technical maybe, but really great for training.   Fast too.  Especially when you hit the dark far end of the course and you're riding semi-blind, and hoping your course memory is correct.

The only thing missing to make it perfect would be one steep run up.   Seems that I remember a lot of ridiculously steep run ups back in the neandrathal days.  The one they had in Wompactuck 'back then' was so long and steep you literally had to pull yourself up with your arms toward the end of the race.

But I digress.  After a one lap recon-pace lap strung it out a bit, the field turned up the watts for one hour of intensity.
I had a good 1st half hour, dicing it up with many of the fast guys staying close. I ended up with my buddy Joe Savic and some others having a pretty fun dice.    I was relieved to discover that I could push it to the limit and stay there without  blowing like I've done almost every cross I've tried since way back in the 80's.   Finally, it was big ring, out of saddle, sprinting up the hills and attacking out of every corner,  pulse pegged just under my 170bpm threshold.   The zen of going flat out and sustaining it, just concentrating on the next obstacle, pushing.   No pain, and no urge to let up.   The thrill of actually being able to pass a few guys, not just getting passed..   Last year in every cross was survival drowning mode.  This was more like it.

Faded a bit though -  in the end it felt about 10 min too long (an hour is a long cross!)  but no worries.   About as much fun as you can have on two wheels.  A good time.  Even won a pint glass at the NBX post race raffle!   (After a month of getting down to fighting weight, I gladly left the beer for someone  else.)

That's not to say no beer ever.  For it was on to the now obligatory post-race pub stop, chow and bench racing session with Joe, Keith Kelly, and a few others.  Lots of working stiffs my age do much the same, out with the boyz, one night a week after bowling or softball leagues.  Those activities are a little too sedate for me, I'm not ready to slow down that much.  Blasting around a park on the limit...then bier and laughs at the Mews which is no wielercafe, but pretty good for over here.  Now that's the perfect time.

I drove home in the rain, satisfied with my first hard effort test after a month of primarily old school road training.  Since the ''Tokeneke Massacre' it's been back to basics for this old-school boy.... setting the dials back to zero.   Back to a formula that worked back in the '80's when the photos on this post were taken:   Longer rides.  Lots of clothing.  Lots of climbing.  Less food intake.  And unstructured fartlek in place of structured intervals.   You often read now where training experts now know that long slow rides in a low gear are a waste of valuable training time, that they just make you slow, and do little to improve your power.   Well, I'm no physiologist, but I don't believe it.  LSD always worked for me.   Think I'll stick with this program, more sustainable. 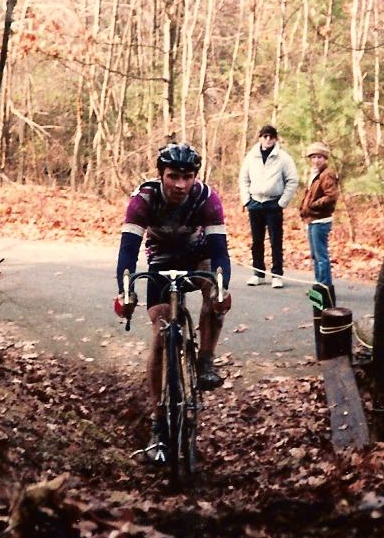 Now it's on to the Providence CX festival in October.   Can't wait.  Seems the older this old dog gets, the more I love cyclocross.    Get yours out and get dirty this fall!