February 11, 2012
You might have noticed that Le Coq Sportif  will produce the Tour de France's leaders jerseys this year.

It's been since 1988 that a French brand provided the jerseys for the event that's much more than a race. It's a national institution.

The Maillot Jaune is a prime attribute of the Tour's brand personality.  And Le Tour is big component of France's brand personality.  It showcases, and sells the beauty and diversity of France, and French culture, to a 'rest of the world' doing it's utmost to dilute it.  Putting it into a technology-fueled, melting pot called globalization.

Somehow, keeping Le Tour French seems pretty important to me.   Even in an age when money talks perhaps more than ever. 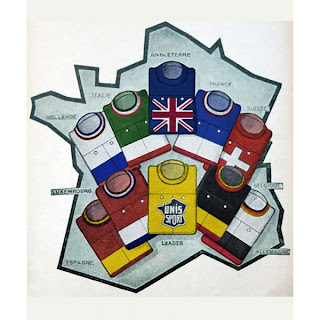 For most of its century-plus of existence, having a French brand supply the official sportswear to the Tour was a fait accompli.

In the thirties and forties a small Parisian sportswear company located on 40 rue de Maubeuge called Unis-Sport furnished the TdF organization with  jerseys.

All those classic flag-like national team jerseys, the maillots Jaune et Vert, and the iconic apres-velo t-shirt that you often saw on somebody hovering in the background in old black and white Tour photos.   It was the official 'chemise' of the Tour.

In those draconian days, the Tour organization used to supply each rider with a few jerseys, caps and an 'apres-velo' tee shirt.  And you had to wear that T shirt those few dazed waking hours you weren't on your bike, or pay a fine.

The Swiss company Vintage Velos acquired rights to the Unis-Sport brand a few years ago.  You can still buy a replica Wool Unis-Sport Maillot Jaune or T-Shirt, here. 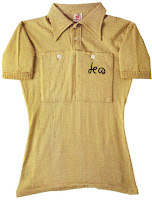 In 1951, Le Coq Sportif took over the Tour kit supply gig.  Their maillot jaunes were marked by the "H.D." initials on the breast, to remember Tour founder Henri Desgrange.

In the Sixties they added their Rooster-in-triangle logo to the chest under the zip,  and then to the sleeves.  Until 1988, the rooster was a prominent icon associated with the summit of cycling. In '67 and '68, when national teams made a brief reprieve, Le Coq Sportif supplied those as well.

Le Coq Sportif 'owned' the Maillot Jaune until 1989, when the bidding began.  Castelli bought the deal.  Then Giordana.  Then Nike came along in the with American cash and along with Coca Cola, a guy named Lance, and a lot of loud-talking, mono-lingustic fans, Americanized the Le Tour for a decade or so. 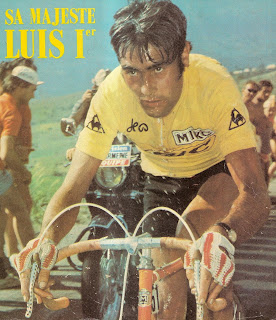 But times they are a changing.  The Tour's supplier have definitely become more French.  Vittel again supplies the official 'drink'.   (Just like in 1968, when the Tour nicknamed the "Tour of Health" began in the spa town of Vittel.)

In the early 80's Le Coq Sportif tried to make a big push into the US market.  They agressively launched a line of lower priced cycling apparel (lots of cotton blend jerseys) and some half decent 'Hinault' shoes (actually licensed Adidas shoes, used by Bernard Hinault to win the '81 Tour).  Used a pair myself for a year.

This mass market brand seems to be pursuing the recreational cyclist route again, launched a fashion-oriented collection around 'l'Eroica'.   Really nice marketing execution...not sure I can say the same about the product though.   I wonder if we'll see that stuff over here again?

It does do my heart good to see that rooster back on the Maillot Jaune though.  Just feels right somehow.

Let Nike's Phil Knight have every other Sport.  He can't own cycling.  Can't 'own' Le Tour.