Photos of the day: 'A Sunday in Hell'... the year before. 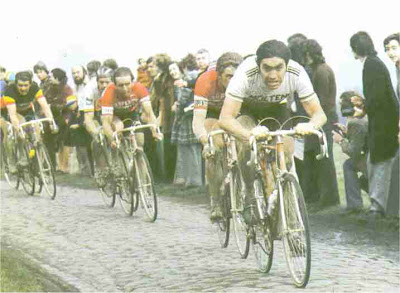 If you're reading this blog, there's little doubt you've seen the 1976 Paris Roubaix race immortalized by Jorgen Leth in his documentary "A Sunday in Hell".   Arguably the best film ever made about cycling.

But what you may not know is that as exciting as that '76 race was - when Flandria's colossus Marc DeMeyer beat DeVlaeminck, Moser and Kuiper in a 4-man sprint - the prior year saw another four man finale that was perhaps even better. 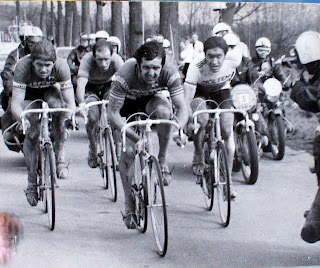 Excepting the 5th place of the then-young Franceco Moser, the 1975 Paris-Roubaix was dominated by Belgians, taking 8 of the top 9 places.

Much like this year's World Cyclocross championship, it was an all-flahute throw-down.  This one held over seven hours that included 130k of wet, muddy pave.
Surviving were four helmetless faces with windswept hair, crusted in mud that had set them in perma-grimace.  Drawn magnetically toward the border of their homeland by thousands of their faithful gathered for the annual wielerfanatic's 'easter mass' at the high church called the Velodrome Municipale de Roubaix.

Approaching Roubaix, the four breakaways - Eddy Merckx, Roger DeVlaeminck, Marc DeMeyer and Andre Dierickx - had long separated themselves from the rest.  No small feat when you consider those left behind included the likes of Walter Godefroot, Roger Swerts, and Freddy Maertens.

Just a few K from the velodrome finish, drama.  Merckx suffered a lekke band - a flat tire.   Sensing opportunity, DeVlaeminck and Dierickx hit the final pave sections like demons, trying to make sure the cannibal didn't get back to devour this one...
Amazingly... Merckx chased back after a quick wheel change to catch the three leaders in Roubaix, just a few k from the finish.  Most mortals would have caught back up, and taken a breather in their wheels, happy to be back before taking their final chance in the sprint.  But Eddy Merckx was not most mortals.  He sprinted straight past, and tried to drop them all.   DeVlaeminck was all over him like a spider monkey though... and the result was a 4-man winner take all sprint on the Velodrome.

Onto the track, it was a throwdown between four of cycling's hardest men.  Context:  Merckx had already won three Roubaix, and was going for an unprecedented fourth victory.   DeVlaeminck had already won twice in '72 and '74, and wanted a third.  Dierickx and DeMeyer sought first wins in a monument.

Flandria's strongman DeMeyer led down on the fringe, but Merckx made the first major move down the middle on the backstretch as DeVlaemick, teeth bared simultaneously jumped on his right, struggling to close on Merckx.   No cute tactics in this one.  No quick jump speed. It was a head-to-head drag race of pride, with the win going to the one who could squeeze the motor for just a little more horsepower after seven hours of redlining. 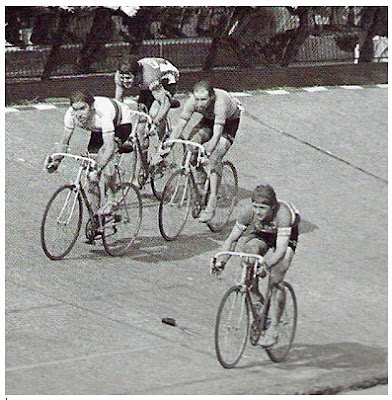 On the line, Merckx was oh-so narrowly bested by Le Gitan.  The gypsy of Eeklo, Roger DeVlaemick, beat the reigning world champion by inches, equalling Eddy's tally of three Roubaix victories.  Setting the stage for the rematch that Leth immortalized in "A Sunday in Hell".    I wonder how much the head-down-dejected DeMeyer crossing the line in fourth was motivated by this race to come back the next year to exact sweet revenge. 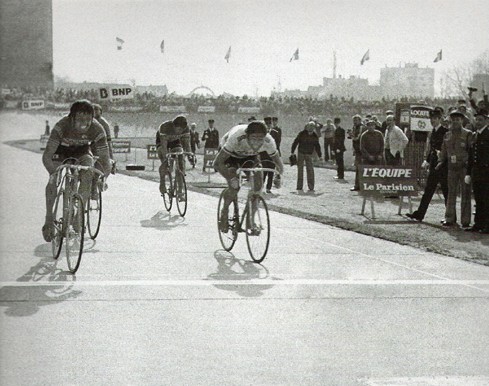 Jim McKay would call this these two contasting photos 'the thrill of victory and the agony of defeat.'
More like the agonized relief of victory. 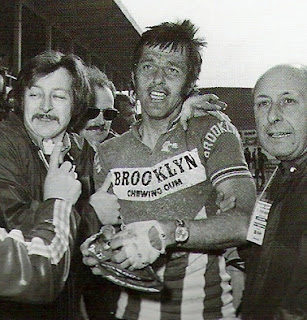