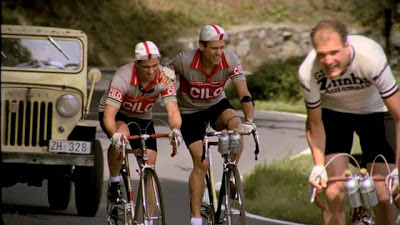 Get out the Swiss chocolate milk old school cycling cafesupporters, and carve out a couple of winter evening hours for a nostalgic escape pro cycling's modern malaise - a trip go back to cycling's great old days.

Here's a vimeo link to the full length version of that Swiss semi-documentary semi-dramatic film production about the life of Hugo Koblet I blogged about last year.

Even if your German (or Schweizerdeutch) is non existent, it pretty easy to follow if you know the story of the 'pedaleur of charm'.

While these types of historic re-enactments are often over-dramatized (RAI's 1990's Il Grande Fausto, which was panned by most in cycling being the reference point) - I thought this one was pretty true to the story. 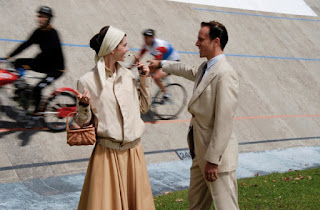 The attention to historical accuracy is top notch, going beyond period accurate jerseys and bikes extending to details like the lucky horseshoe on his Jeep during that '51 tour time trial.   The film cuts historical race footage and real interviews with contemporaries in and out so deftly that you forget you're watching a dramatization.  The casting is near perfect.   Kudos to the producers.

Fausto Coppi may have been the man who invented modern cycling, but Hugo Koblet's was the man who gave it a 'Hollywood' personality - moving giants of the road from goggle clad working class peasants - to an image of a coiffed, moneyed and popular superstar.   Bars low like a track rider, goggles wrapped neatly around his bicep, the ever present comb running through the hair.   Manuel Löwensberg's portrayal is uncannily true to life.

Hugo wasn't all image.  His little written about breakout 1950 Giro victory the year before gets good coverage: Koblet was the first non-Italian to ever win the Giro, despite being helped out by Coppi's bone breaking crash-out at Primolano, Hugo nonetheless won it with seeming ease.   Think Jan Ullrich the '97 Tour.

There's also great footage of his famous solo exploit in the 1951 Tour de France from Brive-Agen, still considered one of the Tour de France's top rides of all time:  One man, riding on the tops, putting minutes into the greatest riders of the greatest generation: Bobet, Coppi, Bartali, Geminiani, Magni, Robic, Kubler, Van Steenbergen... the day the Pedaleur of Charm was born...

The film also documents his sad decline:  His loss of his powers (attributed in the film to overdoing amphetamines, leading to an enlarged heart chamber), the loss of the '53 Giro on the Stelvio to his 'friend' Faust Coppi,  his Tour-ending crash descending the Aubisque in the 1953,  his final Tour abandon in '54, the attempt to start a new life in Venezuela as an Alfa Romeo distributor...the money and personal life problems.   It touches all the key events in his life and career, little of importance omitted.

Koblet's is an true life Icarus-esque tale - a boy who flew too close to the sun, and came tumbling back to earth when the wings came off.

Flahute and I give it five lions out of five.  Enjoy!