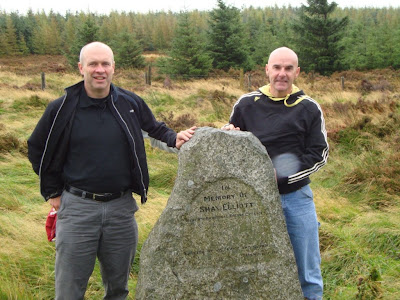 A rainy October Friday in Dublin. Still a bit too early for Guinness. More castles and cruising Grafton Street are not on. Just waiting for Saturday to watch Ireland play Italy in Croke Park in the World Cup Soccer qualifier. Middle aged boys temporarily freed from work and family obligations, with time to kill.
I was reminded of that old Celtic saying... "When God made time, he made plenty of it." What to do?
Well, when you're a house-guest of two-time Ras Tailteann (the Irish national Tour) champion Paul McCormack, you boog out of Dublin and drive up into the Wicklow Mountains. The gravitational pull of Irish cycling heritage led up to Sally Gap. Blarney, good company and storytelling made for a pleasurable journey, with reminiscences of big days on big climbs. The Ras, Coors Classic, Tour de Gaspesie, Tour de L'Avenir. Comparing grades, and war stories of breaks and blowups.
We both were wishing we were on our bikes, not sitting in his sister's car. But the cold rain was belting down, and you couldn't see a fecking thing.
" I'm just taking Eddy O someplace he'll appreciate", explained Paul.
Up and up, to the top of a climb from Drumgroff Bridge near Glenmalure. Narrow roads, the pavement rough as it gets. Stone walls and close hedges line the road... not places you'd want to come off. The heavy roads would grind your skin off like coarse sandpaper.

A summit in the middle 'O'Nowhere'. Paul pulls over on the left. A small stone is just on the edge of the road. It's the memorial to Seamus Elliott. 'Shay Elliott' - the first Irishman to make a mark in professional cycling. My pilgrammage to a home both ancesteral and spiritual was complete. 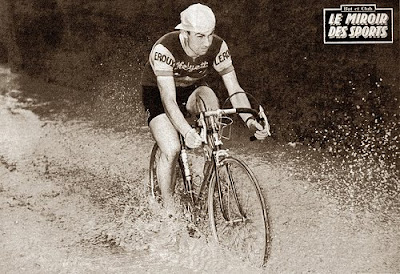 Shay Elliott was a big star of the early '60's. Winner of the 1959 Het Volk. A teammate and inner circle member of Jacques Anquetil's St. Raphael Heylett team, Shay was famously flicked out of winning the professional world championship at Salo Italy in 1962 (video) by his cunning 'best friend' and brother-in-law Jean Stablinski. The next year, 'Stab' repayed the favor. On the stage to Roubaix in the Tour de France, Stab covered the moves while Shay became the first Irishman to take a Maillot Jaune which he held for three days before relinquising it to team leader and eventual winner Anquetil.

Sadly, Shay's final years were less glorious, but painfully and stereotypically Irish. He mysteriously died of a shotgun wound in his Wicklow garage in 1971, two days after his father passed away. His French wife had already left him. They still debate whether or not it was a suicide. Paul's father J.J. McCormack went to the funeral. Family and friends put a small stone at 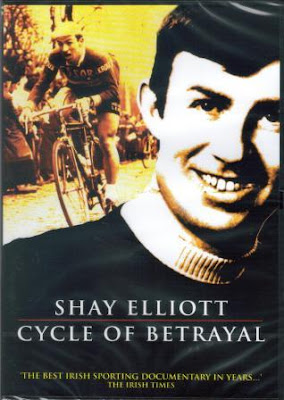 the top of one of the tough Wicklow climbs he'd stomped up to preserve his memory.
Paul and his brother Alan started cycling on club rides in the Wicklow mountains. In gaelic hedge-school tradition, they listened to stories of Shay's performances passed from older guys, as if it were the legend of Finn Mac Cool. Word of mouth testimony that gave a generation of Dublin cyclists a benchmark of excellence to fight for, spurring them to get on planes and ferrys, a thread of confidence that they'd could take on the world's best. Like Shay did.

Later that night we had a nice dinner in a pub on the Irish sea in Bray, home of the Bray Wheelers and the organizers of the annual Shay Elliott memorial race. On the spur of the moment, we went to see Bray Wanderers come from 2-0 down to beat Cork in a really great Irish league soccer match. You could feel the desperation in the relegation-zone Bray side as they clawed their way back to an unexpected final minute winner. The atmosphere was electric. Shay probably would have appreciated the fight back.
Setanta just produced a great documentary on the life and career of Shay called "Cycle of Betrayal". I haven't seen it in full yet, but it's available online and you can check out the trailer here.