Especially now that it seems that the Cache Cache restaurant owner had phoned Lance to tell him Tyler was dining on premises (latest twist in the story flagged by our eagle eye Dr. Brad here).

All it needed was Robert De Niro saying to Joe Pesci 'we'll keep him here till you get back.'

Gets me thinking about the unfair reality that behind every superchampion, lies a lesser-known man who sacrifices blood, sweat and tears to put him in a pastel jersey.   Put him on a podium.  And of course, put riches in bank account.  Riches that don't seem to trickle down.   Never seemed fair to me.  But then again, I never did buy into the domestique concept myself.  Not that I don't immensely respect those who do the job.   It's so much harder to suffer for someone else than it is to suffer for yourself. 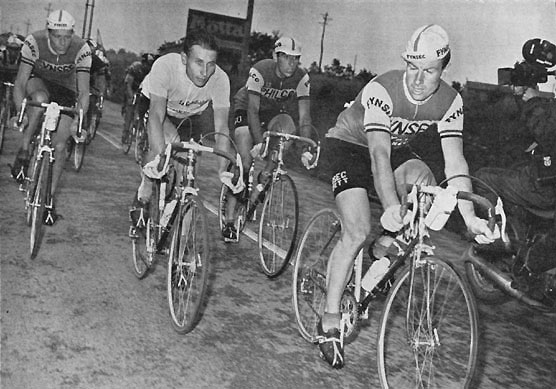 Case in point:  Here's Ireland's great Shay Elliott in the 1960 Giro d'Italia, guiding Jacques Anquetil to the first French Giro victory ever.  It was 50 years ago, a few months before I was born.  The photos above and below are from a great site here tourracingco.uk, which has some great old stories about Simpson, Elliott and the other English speaking pioneers of the '50's and '60's.


Despite Shay's monsterous team work, he managed to win a stage too, the longest of that particular Giro.

".. the stage win of Seamus Elliott, every bit as important in its way, as that by Brian Robinson when he scored his first Tour de France victory two years ago at Brest. It was not, as I believe has been reported in Britain, the toughest stage of the Giro, but it was the longest. Elliott's success was the result of one of his strong end-of-race rushes for which he is so famous. In the last hour he had an epic pursuit match with Battistini, which forced him to use a 54 x 14 gear first to catch, and then drop his rival, a few kilometres from the finish.All the Helyett team were glad Shay had pulled off the stage win. He had been working so hard for the team that he had let other stage-winning opportunities escape earlier in the race."

Selfless Shay.   He sacrificed his 1959 Tour de France to stay back with a sick Brian Robinson to keep him in the race on a 'jour sans'.    And he slaved for years for Anquetil, who in the end flicked him from a certain win in Paris-Luxembourg, and dropped him from the Ford team at the year's end, when he was no longer of any use.

The parallel to Tyler and Lance is poignant.  Elliott 'spit in the soup' by talking drugs to a tabloid paper for cash.   Tyler's getting grief for speaking to 60 minutes.  Fifty years later, some things haven't changed.

In my book, both are honest, and selfless champions. And men of courage willing to speak out.  Even when it's arguably not in their own long term best interest.

Omerta is so yesterday. Jean Bobet said that "Shay was more of an Amateur at heart".   Nothing wrong with that in my book.


As another Tour gets ready to kick off, here's to remembering Dublin's great Seamus Elliott.  And here's hoping two more children of Dublin born parents - Dan Martin and Nicolas Roche - uncork similar great rides over the next few weeks!