August 28, 2011
I think the Versus coverage of this week's US Pro Cycling classic from Colorado has been fantastic.   With the exception of a little picture breakup, the vistas of the Rockies are magnificent.   What a fantastic place to ride. 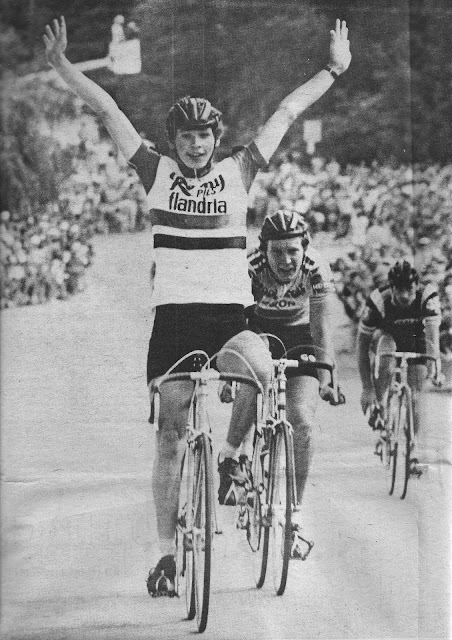 I remember that they had a 'miss and out' race in North Boulder Park back in 1977-   a year when Wayne Stetina took the overall title from his brother Dale and a Mexican named Huerta.   The miss and out was a criterium where the last two guys got eliminated every lap until it's down to a few who sprint it out for the win.   Check out the leaning going on in this photo.   Hard to imagine them having a pro miss and out in a big stage race these days...

That Miss and Out stage was won by a crafty young Belgian rider named Noel DeJonckheere riding for the Turin-Chicago team.

Liking the cash and the altitude benefits, he'd return a year later with a full W.S.C. Torhout / Flandria amateur team, and win another North Boulder park stage in 1978 over Wayne Stetina.

He then took that speed and altitude honed form back across the Atlantic to claim a world champion's rainbow jersey on the track in the points race in Germany a few weeks later, and promptly turned pro for the Spanish TEKA team.

De Jonckheere raced a lot stateside as an Amateur, forging close ties with the Detroit Wolverine Sports Club's Roger Young and Jim Ochowicz.    Yes, you got it, the same Jim Ochowicz who runs the BMC juggernaut today.

The W.S.C. Torhout - Flandria team was a Belgian developmental powerhouse in the seventies - it had been the Amateur team of both Freddy Maertens and Michel Pollentier who'd gone to pro contracts and big time fame just a few years before DeJonckheere.  Expectations, and pressure, couldn't have been much higher.

As a neo-pro, DeJonckeere immediately started winning stages in Paris Nice and the Vuelta d'Espana.   He rode the Tour de France for Teka twice, in 1981 and 1984.   Later, DeJonckheere would ride for Ochowicz 7-Eleven pro team.  After retiring, he and his wife started the famous 'Belgium house' for USA cycling in Izegem that's been the development cruicible for a generation of US talent.   Now he's back reunited with Och at BMC racing - so the circle has turned.

Noel's brother Richard was one of the earliest advisors to a young Junior named Greg LeMond when he made his first forays into European racing, and since then Dejonckheere family DNA has been helixed into so many successes of American riders in international cycling.  Since the mid seventies, the Dejonckheere clan has always been there for US cycling, but the role they've played in doing the unsung and underappreciated nitty-gritty hard work to develop American cyclists, has, with the exception of a few sporadic articles now and then, largely been under-recognized.

Their Flemish work ethic, entrepreneurship,  patience and above all passion has provided the foundation that has put a whole generation of American talent at the forefront of procycling.   So as this week we see a new generation of American talent receive well earned adulation in the newly reborn 'Tour of Colorado', I think we should remember the past performances in that same race of a guy who's played such a big part role in the development of so many of them.