Photo of the day: Eric the Red 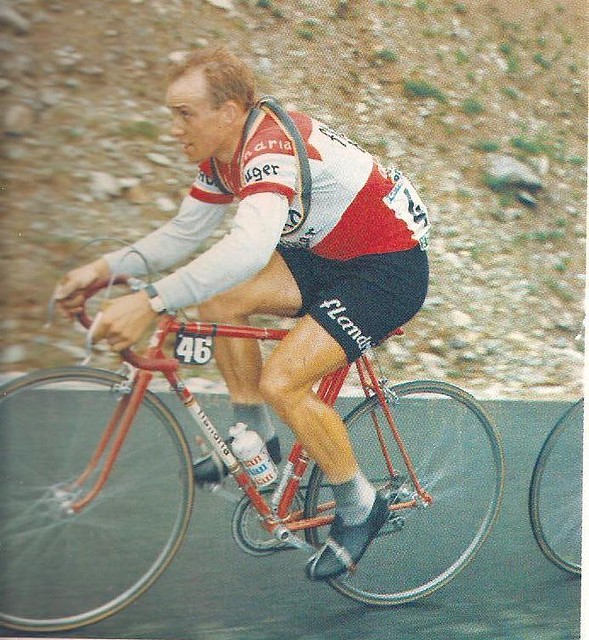 He scored three Ronde van Vlaanderen victories in the time of Merckx, DeVlaeminck and assorted other Flemish supermen.  1970, '72, '73.

A west-vlaanderen, and Flandria, legend.  A guy who'd work in his family butcher shop in the off season.  Can't picture Tom Boonen doing that, can you?

Not many tend to remember him now.  Well, they should.

My favorite photo of Eric Leman is not one of him sprinting to win the Ronde on his home turf, or on the podium with flowers in his hands.   Rather, I love this photo of him fighting...off the back in the mountains.. on a day, and on a parcours that was not his home turf.    A photo I can relate to.  Probably you can too.

It was taken in the 1969 Tour de France, the first one dominated by Eddy Merckx.   I believe it was taken on the stage in the Col de Madeleine in the Alps.    The year before Leman had won stage 20 of the Tour from Besancon to Auxerre -  outsprinting Michael Wright.. a flemish speaking Belgian rider with British nationality.   And he'd snagged stage 3 of the '69 Tour already, outsprinting Italian sprint stars Marino Basso, Michele Dancelli and Dino Zandegu.

This Alpine stage was another story.  Maybe he'd had a mechanical... he's got a spare tire around the shoulders like in the days of Bobet and Schotte, and a silca frame pump.

Anyway, it's a photo that speaks volumes about cycling - a sport that requires that even the greats suffer days of humility.