Adieu to Tuur the Toro.

His is not a name many know this side of the Atlantic.   But hey, global name recognition doesn't equate to 'greatness'.   For this was a man with the strength of a bull, the heart of a true lion of Flanders, and the resume to back it up.

Sadly, he was 75 years young.  Out last Saturday on his bike, riding lang de vaart.. alongside the canal.   A nice, flat ride.   Somebody up there must have looked down, and decided it was time to call home the 'Toro'.   His ticker gave out, for he'd had a history of heart problems.   There was nothing the rescue squad could do.  And sadly, this giant of Flanders was no more.

Arthur "Tuur" Decabooter.   His name is etched into history of the Ronde VanVlaanderen by winning it in 1960.  Awhile ago, I know.  Heck, it was a few months before I was born, 52 years ago.

Tuur was a star of the 'other' Flemish armada of the sixties:  Groene Leeuw... the 'Green Lion' brand.   Like Flandria, this Belgian bicycle brand was one of the big teams of the day.   Had a bunch of cosponsors, most famously the Wiels brewery.   Briek Schotte rode for them after World War II.   You can still buy a replica jersey here.  And the full long sleeved wool one here. 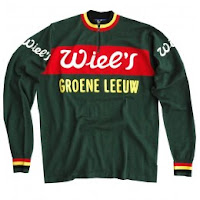 Decabooter exploded onto the pro scene with Groene Leeuw in 1959, already with some big references.  Like winning the Ronde Van Vlaanderen for Liefhebbers in 1955.  And winning again in Independents (onafhankelijke) version in 1958.

Winning the 'big' Ronde for beroesprenners in his second year as a pro?  Well, it just continued the progression.   I think Tuur's the only guy who can lay claim to that feat!

His Ronde win was taken like a true bull, leading out a sprint from the front.  In the final 5k, a select group had just reeled in Shay Elliott.   Then Jacques Anquetil tried.  No go, pulled back too.    But just as Willy Schroeders was getting set to lead out his captain Rik Van Looy,  Decabooter went for it with over 200 meters to the line.   He won, somewhat surprised, with as they say, 'two fingers up the nose'.  Neither 'Popov' Jean Graczyk nor Rik Van Looy could come around him.

In that spring of 1960 Decabooter was transformed into Toro-Tuur, a terror.  While a flat tire may prevented a win in Roubaix, he did win the Dwars door Belgie, took two stages of the Vuelta as well as the points classification, a stage of the Tour of Belgium, and the championship of East Flanders.   In '61, he took the Het Volk and another Vuelta stage.   It was those three victories in Spain, rather than his solid constitution, which gave him his nickname of 'Toro'.

El Toro left the green lion for greener pastures, riding with two different squads over the next three year (Liberia and Solo).   It's probable that the appeal of - ahem - 'bulling' the way for Rik Van Looy likely faded, so he returned home to Groene Leeuw for 3 more years in the peloton.  In 1967, Decabooter managed three wins before a final adieu to the peloton.  An exit followed two years later by the Groene Leeuw team.

He retired to live in Asper-Gavere, right smack between Gent and Oudenaarde.   It's the heart of Flanders.  You probably have heard of the town as the venue of the annual Superprestige cyclocross race.   Tuur would still show up on the television, or the races as a elder VIP from time to time.    From what I could see, he seemed a quiet modest and friendly guy, the type who'd rather let his legs do the talking.   A gentleman, from a different generation.  One who grew up in Flanders in the war years, with hard working parents of modest means.   Parents who, seeking a better life for this children, sacrificed to buy Tuur that  first bike so he could ride to attend a Walloon school, in distant Bergen.  He seemed like a guy with his head screwed on straight, and his feet on the ground.

Tuur remained was incredibly popular in his home town.  The Sportpaleis cafe in the town square of Zingem was run from 1958-1960 by Tuur's parents, and is still in the family, run by Tuur's nephew Eric Ronsse.  Article here.   The walls  are covered with dozens of photos and memories remembering 'El Toro'.  Tuur would often visit to mingle with patrons, or play a game of cards.   "He was still incredibly popular," says Ronsse.  "The cheapest cycling cafe in Flanders" is their slogan.  I especially love that.  Sounds like my kind of place.  If you're ever over there cafesupporters, go have a beer there, and consider that when Tuur was in there in his racing days, he's famously abstain.  "Our team manager Berten De Kimpe would have grabbed the pint and poured over our heads," said Tuur in an interview years later.

The council has put in a mourning hall, where everyone register their feelings about the passing of Tuur.  This coming Saturday, Decabooter will be laid to rest at St. Martin in Asper.

This Monday, while Gavere was mourning the loss of one of it's greatest sons, the same town coincidentally hosted a press conference to welcome home Thomas DeGendt from his Giro performance.  A first grand tour podium for a Belgian in 17 years.  There's a lot of the old school in DeGendt.   Decabooter had said a few years ago that he considered Tom Boonen to be the only flandrien left nowadays.   I wonder if after his escapade on the Stelvio if he would have considered adding DeGendt to his shortlist?

The wheel turns full circle in life too.  Particularly in East Flanders, where thanks be to God, there's always another flahute stepping up to continue the tradition.

RIP Tuur Decabooter.  Check out some sporza tribute video to the man here.