May 08, 2012
Unless you're living under a rock, you know that this year the penultimate stage of the Giro d'Italia ends on the Stelvio.  Then it's on to Milan for the showdown final TT. 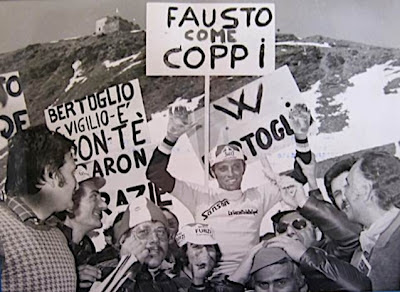 Well, back in 1975, the grande finale of the Giro itself, the end of the final, 21st stage, was at the top of the Stelvio, the highest pass in Italy.

And unlike this year when they climb the southern side from Bormio after taking in the Mortirolo, the 1975 finale was up the more 'famous' northern approach from Bolzano - that ladder like staircase of 40 plus hairpins stacked on top of another, a wondrous engineering miracle in a part of the world where even the smallest mountain passes are masterpieces of road design that leave your mouth agape.

It was the same approach Coppi scaled when he won his fifth and final Giro in 1953, dropping Hugo Koblet.

22 years later, another Fausto was leading the Giro when it hit the Stelvio.  Fausto Bertoglio.   Not exactly a household name I know, but a great rider of character you should know.

With Eddy Merckx and Jose-Manuel Fuente (who'd locked horns in the prior three editions) absent, 1975 was a wide open, great Giro.  A lot like they're predicting this year.   Recommend you read Bill McGann's super blow-by-blow account of that '75 race filled with sub-dramas here.

Bertoglio was from Brescia, and had turned pro with Brooklyn riding in service of Roger DeVlaeminck.  In his 3rd year as a pro, he had just jumped over to the Jolly Ceramica team, now riding shotgun for a new team leader, Marostica's climbing phenomenon Giovanni Battaglin, the prodigy who'd challenged Merckx in the '73 and '74 Giros.   With the cannibal absent, the Jolly Ceramica team hoped it would be Battaglin's turn to put on pink.   He'd again face a Spanish KAS armada chock full of mountain goats, and the Belgo-Italo Brooklyn team of Paris Roubaix winner Roger DeVlaeminck; the man on form, and for many pundits the hot favorite to win that Giro. 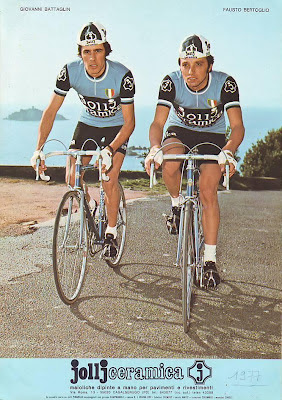 Spanish climber Francisco Galdos was in Pink coming into the stage 12 time trial at Forte dei Marmi, where he crashed at the start!  Battaglin won that pan-flat test along the seafront (the same one immortalized in the films Stars and Watercarriers and the Greatest Show on Earth) taking over the Maglia Rosa.   That night at the hotel, the mood in the Jolly team was...ahem, well... 'jolly'.  The smiling, quiet Fausto Bertoglio pulled out his guitar, and strummed away.  There was singing.  Everybody was in a festive mood.

The next day, was another TT.  This one a 13 km. cronoscalata up Monto Ciocco.   The laid back gregario Bertoglio flew up the climb, winning the stage, and stripping the maglia rose from his captain by a scant 6 seconds.

As you can imagine, there was no guitar playing that night.  It's an old cycling story, always with the same ugly outcome.  Two leaders in a team.  We've seen what happens over and over.    With LeMond and Hinault.   Roche and Visentini.   Cunego and Simoni.   El Pistolero and Lance.  'This town ain't big enough for the both of us.'

Predictably, Battaglin tried to assert leadership at the dinner table.  Il direttore said both riders should be protected.  The road would decide, and it did so rather quickly.  Next day Battaglin had a jour sans, Gimondi attacked and Bertoglio's leadership within the team was solidified.   But his leadership of the Giro was far from secure, for the dangerous Galdos was only 41 seconds back.   And on the Stelvio, 41 seconds is niente.

For eight days, Fausto defended the jersey.  Then came the gunfight at Stevlio corral.    Thankfully the weather gods cooperated, and the dramatic Giro finale was played out in sun, through walls of snow.  Two jerseys, one yellow, one pink, against the white walls.

Galdos surged again and again.  Riding in a state of grace, the tenacious Bertoglio stuck to him every time.   Once again a scalatore named Fausto was making the tifosi dream.    Galdos took the stage, but Fausto won the Giro.   The tifosi was going crazy, hoisting the new champion, chanting, singing and carrying a placard on which was written 'Fausto, come Coppi'

They danced on the root of Europe, on a tiny platform of a pass that today has a monument to Fausto Coppi.  It's a high, wild place.  But that June 7th of 1975, it was the summit of the cycling world.

And it was the summit of Fausto Bertoglio career.  The guitar player would finish 3rd in the Giro the next year behind Gimondi and DeMuynck, and ride the Tour de France as well.   Perhaps it was too much.  In '79 he'd finish 7th in the Giro behind Italy's new star, Beppe Saronni.  He'd ride one more season, 1980, in Francesco Moser's Sanson squadra, and retire at season's end with a professional palmares totalling 16 wins.

What I'd call a great career.  For it's not the quantity jongens, it's their quality.

Fitting with what has been described as his modest, tranquil and unassuming character, he went back to Brescia and opened a store, Bertoglio Sport, where he sells bicycles with his son Andrea.    His second son Paolo became a professional rider with Panaria in 2000 and 2001.  Bertoglio is still in love with the bike, still rides every Sunday, and still loves music, sometimes pedaling while listening to music.

His adversary "Paco" Galdos, the KOM in that Giro and the first Basque rider to wear the Maglia Rosa -  would finish 4th in the '77 Tour, and 2nd in the '79 Vuelta behind Joop Zoetemelk.  Like Bertoglio, he'd retire in 1980.  And just like Bertoglio, he'd go back to his home town - Gasteiz-Vitoria in the Basque country - where he'd also open a small business.

Only his is a highly successful Pizzeria, called 'Dolomiti'.    Perfetto, eh?