He's the most interesting man in the world...of cycling

May 21, 2012
Road cycling's 'greatest generation' only has a few old-soldiers still standing.  One is the Swiss legend Ferdi Kubler, winner of the 1950 Tour and 1951 world champion.  Another is a larger-than-life guy, the last living bridge to the good old days of cycling.   He's now a retired gentleman who cites his love of nature as his secret for longevity, and yoga as his secret weapon for his climbing power on the bike.

Imagine for a minute sitting in Seillans in the south of France, tending your garden in your old age. The cold mistral starts blowing, so you retreat inside for a glass of wine.  In this melange of turbulence and serenity, much like your nearly 90 years, you gaze out over the pays and reflect on your life.
Imagine this guy is also a bon-viveur, and a raconteur.  A man of a thousand quotes, and a million stories.   A celebrity who in retirement, owned a sought after restaurant in your home city, where you'd transcend sport to mingle with stars of politics, stage and screen like Alain Delon, the French James Dean,   the singer Jacques Brel, the filmaker Claude Lelouche.

It's debatable whether the 'big gun' nickname referred to his attacking style, his long roman nose, or his shooting off at the mouth.  Probably all three.   It's a great nickname though.

One thing is for sure.  He's a man who's forgotten more about cycling than you'll ever know. 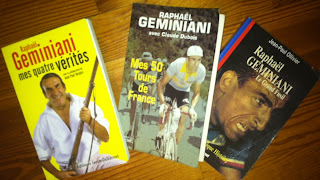 The most interesting man in the world... of cycling.

I've been reading some of the French language books Gem's authored over the past few months.    They go beyond the stats to his attitudes and some of the great stories around those days.   A character, yes.  But one of true character.

Yogi Berra has nothing on Gem when it comes to memorable quotes. 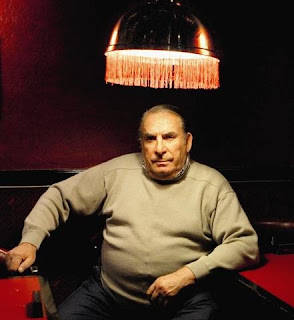 Or this one after breaking convention to spend the Tour rest day (and night) in Nice with his wife in 1950.   "Bobet wasn't happy, he said, 'Raphael you should go riding.'  Sure Louison, I'm riding all right, believe me, I'm riding.  The next day from Nice to Gap I was supercharged, getting away on the Col de Sentinelle, winning in Gap by 22 seconds.  Next day, I was 11th.  Then another stage win the day after in St. Etienne.   Bobet said "It's just not possible after what you did during the rest day."   I looked at him and replied, "Louison, a guy who has empty balls always climbs faster than a guy whose balls are full."


Stephen Roche thought he knew Gem when he was suddenly installed without consultation to take over his La Redoute team in 1985, but discovered him to be the ideal directeur as he wrote about Gem in his autobiography, 'The Agony and the Ecstasy".

"Before meeting him, I felt Raphael Geminiani was not my kind of man.  From what I heard and read, I did not like him.  He was a talker, he did not seem proper.  My image of him was of a man who stayed up late every night, talking and talking.    At the Tour of the Mediteranean at dinner, Gemininani was sitting directly across from me.  He complained that I was ignoring him.  He didn't know what I thought of him, but said that we were going have to work together.  So I told him everything I thought of him.  It was not very complimentary.  We argued for an hour and a half.  He put me in my place, I put him in his.  And that was it.  After that, we got on fine...


He was a very nice gentle man, good to be with.  Very good for me."

Gem was an born attacker, a man with a penchant for the audacious attack, the exploit.  He'd done plenty himself.   Like wailing up the Ventoux in 1951, the first time it was used in the Tour challenging eventual Tour winner Hugo Koblet.   And doing it again in a furnace of a day in 1955, going with the suicidal attack of Ferdi Kubler, warning his adversary, "Careful Ferdi, Le Ventoux is not like any other climb..."

The appetite for the exploit carried over into his role as a team director.  It was Gem who convinced Jacques Anquetil he could win the Dauphine and then fly directly to Bordeaux without sleep and win Bordeaux-Paris.  And like Muhammed Ali or Babe Ruth, he called Stephen Roche solo stage win on the Aubisque in the '85 Tour months in advance, yet once that one was in the bag, he still wanted something even more audacious.  Stephen later said "Geminiani being the man he is, wanted me to do the same in the afternoon stage which went over the Aubique again before dropping into Pau.  But it was much hotter in the afternoon, and I was not interested in suicide missions" 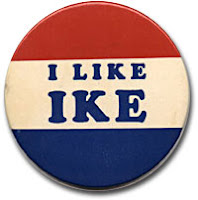 He wasn't asking anything he hadn't asked of himself in his glory days though.  After Gem won a Tour stage after a long raid to Mulhouse over the Ballon d'Alsace. in the 1952 Tour, Jacques Goddet, wrote, on the front page of L'Equipe, a short homage to Gem's attacking, generous, 5-plus minute winning gap exploit under the headline. "J'Aime Gem".

J'Aime Gem.  I like Gem.    It was a play on words, un jeu de mot in that same summer of '52 when Eisenhower was running for the US presidency under the "I Like Ike" slogan.


The more I read, the more I like Gem too.  For me, he's 'the most interesting man in cycling'.  A guy I'd put top of of my list of the 'people I'd most like to share a meal with'.   There'd be drinking too.  Count on it.