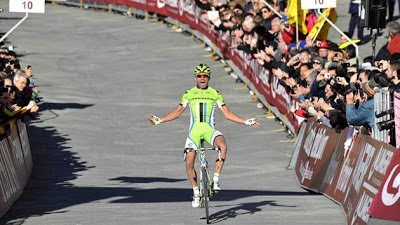 On the positive end we get the Strade Bianche, and a killer performance by Moreno Moser, a kid I'm fast becoming a fan of.    It was a great race to watch.  If you didn't catch it, you missed a real classic.  Old school.

First Juan Antonio Flecha heroically goes after a four man break that looked it might possibily stay away and steal the show.  Eats into the lead, but starts to run out of juice when he gets 45 sec. or so away.  No man's land.  4 against 1.   (No worries hombres, Flecha will be ready for Flanders and Roubaix)

Then Moser motors off alone, catches and drops the Spaniard, and after a long pursuit links up to the leaders in the final few miles.   Behind a sporadically-raging-Spartacus is frustratingly marked out by Moser's brother-in-arms, Peter Sagan.   Incessant flyers by Nocentini, Cancellara and others bring the leaders just an ever so tantalizing 'one-more-jump' away on the climb to Siena, just as Moser dumps the others and digs-in for the long power surge to the line.

It was shades of uncle Checco.  No stopping the Trento kid.   Everyone from Eddy Merckx to Franco Cribiori are clamoring for him to do Roubaix, but he and his green machine handlers are more focused on priming him to make a mark in the Ardennes in April.   Father Diego and Uncle Francesco better get the labels ready for a special 2013 vintage at the winery.

Still, I'm sure that seeing that familiar Moser snarl raging in the finale Saturday did a lot of hearts weighted down by a long winter of endless media and courtroom doping drama some good.    Having an 'eroic' backdrop in the heartland of cycling didn't hurt either.   Old time cycling, the kind 'we pesants' love.  Live for. 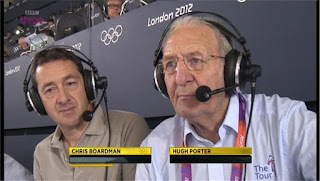 In contrast, on the negative end of the old school respect spectrum, let's go to the UK.  Where it seems that the BBC, in it's infinite wisdom decided to 'retire' Hugh Porter from the commentary box before the Track Worlds last month.   It's come out today in the Telegraph that the ex- 4 time world pursuit champion and British Cycling legend- a guy who's forgotten more about track cycling than the media-twits that employ him will ever learn - decided to not so subtly inform him that he was from now on, 'surplus to requirements' when it came to BBC televised cycling.   Not speedskating mind you, where they're happy to have him keep on working, but cycling.

An uncouth Irish guy like myself would have told them where they could put those speedskates.  But I'm sure Hugh Porter is too much of a true gentleman to do that.

Old school gets no respect.

Can't you just hear all the artificial image makers salivating - those empty suits set on turning the suddenly red hot UK cycling enthusiasm into a F1-style commercial bonanza, selling all kinds o' shite out the wazoo to all and sundry.

No, the BBC, and their sponsors likely argued/lobbied, this style of distinguished, informed elder statesman is not the front-man we need to represent our... ahem... 'product'.

It's an outrage, and it's got me fired up.    Cause the one thing that pro cycling needs, now more than ever, is tradition.   And you just showed tradition the door BBC.   You should be ashamed of yourselves.  Go have a cup of tea, and reflect.

It's an interesting contrast 'innit?   Tifosi in Italy (and beyond) go crazy when the latest prodigy from a cycling dynasty confirms himself on a classic stage.   While over in the UK, a similar thread to the past glory is cut in a rushed pursuit (pardon the pun) toward an ill-conceived mirage of a future.

I'm afraid it's a portent of more to come.  Yer man of the moment Sir Brailsford himself spoke a few days ago on cyclingnews.com, lobbying that cycling the business it supports needs to soon change radically, with a new structure, calendar and business model:

"In most industries there comes a tipping point where it changes its structure. When you look at all the elements in the sport of cycling at the moment, they're all there. It's getting very close and I can’t see how it can't happen if the sport wants to survive, so it will happen,"

"There's a whole host of different factors. But as with any strategic plan, you've got marry up the key factors into a single plan," Brailsford said.

"TV rights and revenue to teams is only one small part. At the moment sponsors come and go so quickly, that it's an unreliable financial model: that's the problem. Whether it's TV rights or greater commercialization of the sport, it's about giving the teams and sport more stability. That's the question we have to answer."

Blah blah flippin-corporate-speak blah.  BLAAAHHH!   Take it from an MBA marketing stiff:   The growth limiter here isn't the packaging, or the promotion.  The problem is the product quality.   Not the product format or structure, but the product's quality control.

It's a logic flaw.  This group of self-interested geniuses keep trying to turn cycling into the 'New Coke', when what the customers really want to keep drinking... is 'Classic Coke.'

The juice in the Coca-Cola can doesn't taste right to it's longtime customers, so what do these 'product managers' do?   Mess with distribution policy - the squabbling over the 'profit split' between the brand holder and the bottlers (e.g. fights over TV rights)  And lobby to change the basic product formulation (e.g. race calendar and team structure) when the original was doing just fine, thank you very much.

All this misplaced strategy, when all they really need to do is to fix the poisonous taste of the juice in the can (it's doping, you dopes).


For this oligopoly of self-interested power players to continually argue that the solution to the sport's ills is radical restructuring, a closed club of teams, and slicker marketing to thrive is disingenuous.  So full of self-interest it'd be laughable if it wasn't so sad.

Cycle sport doesn't need 're-packaging'.   It simply needs cleaner riders, going toe-to-toe over heroic, challenging courses.   I'd even argue it absolutely doesn't need the kind of big budget mega-teams that SKY and the Gifted Group seem to want us to believe hold the only keys to sustainable success.   Isn't it amazing how the underfunded outsider teams (Colombia Coldeportes, Gianni Savio's squads, Vacansoleil) continually provide the big surprises, the big exploits?   The kind of thing you never see in F1, the Premiership or the Champions League anymore.  That jongens, is what a closed shop will get you.

No the problem is with cycling's product quality, good sirs, not with the product's structure.  Nor is there any real issue with it's presentation.  Any 10-year-old with eyes and ears can read the news and tell you that really the only thing holding back cycling's growth is systematic institutional doping, enabled by mafia-style corruption.

And every relevant, historical sporting precedent one can name suggests that this proposed 'closed shop' the geniuses advocate is unlikely to clean it up.  Show me some evidence Gifted Group.   I point to the state of the NFL, MLB and MBA as my evidence.   (And oh, by the way while I'm on a good rant...who are the names of those others sportsmen whose blood bags were found in the Operation Puerto case again?   We're still waiting...)

You trust ANY of these guys wielersupporters?  Me neither.

In fact, let's quantify it, and prove it to the 'Gifted Group' with the gift of a cold shower of data:   Take this survey, and tell us just how much you fans TRUST some of the leaders who are lobbying to 'restructure and improve' the sport.    Great products, great brands are built on trust.   For laughs, let's see how much there is out there right now with the customer base.   Send it to your riding buddies.

As for me, give me a good old thrown down battle on some strada bianche, fueled by a bidon of Coke.