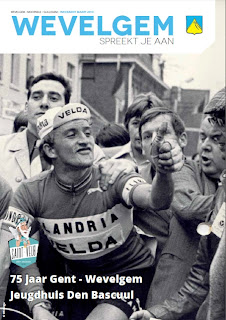 And speaking of winter weather in spring jongens...here's some great photos of the 1975 Ghent-Wevelgem.   A little old school throwback to whet your appetite for cycling's holy week.

It was a year very likely before your time - almost 40 years ago.  To me it seems like yesterday though.  Back when racing in wool through winter was just what was done.   No fuss.

In the end this one was a sprint of greats.   With Freddy Maertens winning the sprint battle in true flahute weather.   From a break of 100% 'flandrien hardmen' (It's safe to include Francesco Moser in that category I'd say!)

The faces say it all. 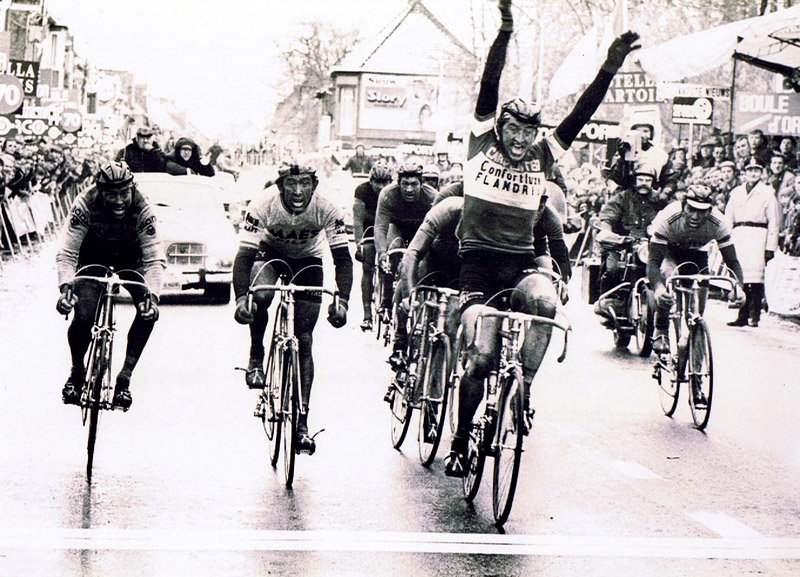 From left:  Gerben Karstens (4th) and Frans Verbeeck (2nd) are so close.   Rik Van Linden (3rd), Marc DeMeyer (5th) and Andre Dierickx (7th) are hidden behind Freddy Maertens.   The '74 World Champion Eddy Merckx on the far right (6th) looks none too happy.  A young Francesco Moser (8th) and Belgian Champion Roger Swerts (9th) are at the back.   Check out the video of the sprint here. 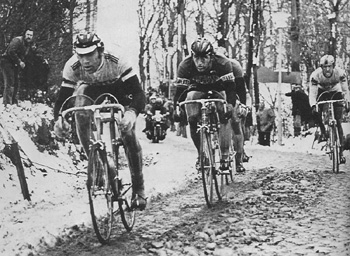 And how about riding down the Kemmelberg in the snow!  Check out that road.

If those conditions happened this year, they'd probably have cancelled the race.   Not carbon rim compliant. I may be wrong, but I don't think there was the same general hand-wringing about the weather by the media, organizers and riders back in 1975.   No whining about the cold, snow and rain with these guys.

Flahute's law:  The amount of rider whinging about bad weather is inversely proportional to the availablity and abundance of modern winter cycling thermal-insulating-high-tech apparel. 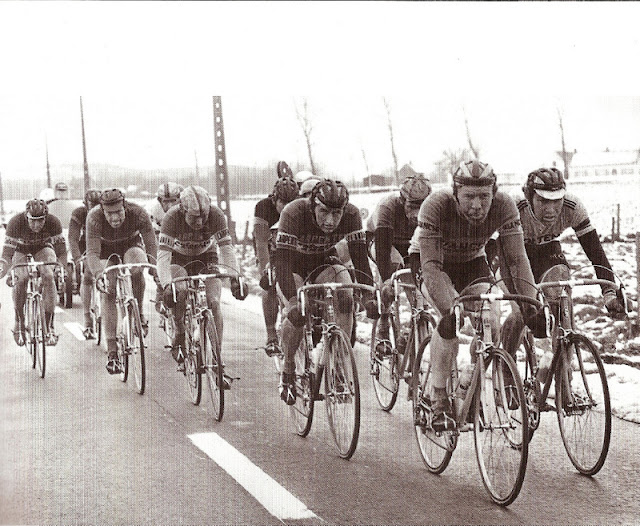 Every guy in that break was a champion.   Michel Pollentier is in this picture too, in the hat between Maertens and Moser.

Those were the days, eh!    Hope we get to enjoy a similar showdown Sunday with a slugfest between Boonen, Cancellara, Sagan, and company.