January 05, 2014
What do you give a crusty old Irishman with flandrien taste for Christmas?  Leave it to my old pal Santa-Pooch to solve that one... A Vittore Gianni replica FAEMA jersey! 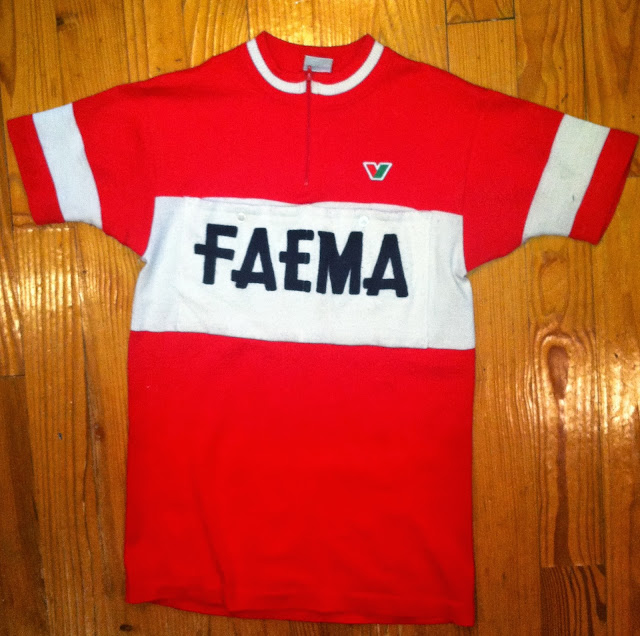 It's the same team design worn by two of my Favorites - Charly Gaul and Rik Van Looy - back between 1956 and 1962.   Back in the days when cycling was a little more about sport, exploit and adventure...and little less about commerce, technology and science.  It's a natural complement to the Flandria Cafe kit, eh? 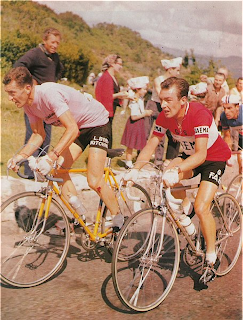 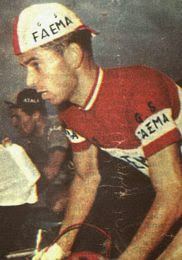 Vittore Gianni was a Milan based tailor who from a start in 1876 grew to become the apparel supplier of champions hitting a peak back in the late 1940's and 50's when the company supplied A.C. Milan, Juventus and the Milan ballet - as well as virtually just about all the top cycling teams and champions in Italy:  Bianchi, Legnano, Atala, Benotto, Viscontea, Cimatti..and of course, the FAEMA squad of Learco Guerra. 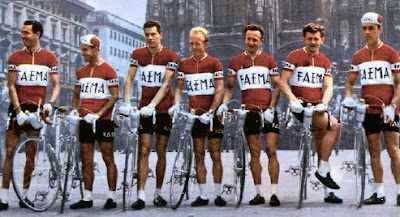 According to Vittore Gianni's then-director Armando Castelli, Fausto Coppi himself used come to Milan near Ponte Vetero, zona Brera.  There he'd go to Detto Pietro for his shoes, and Vittore Gianni for all the rest.   And his celebrity factor would create quite the commotion, as one might imagine.   Castelli recalled:

"He (Coppi) had a predilection for morbid colors, celestino, white, silver-grey.  For training he wanted cotton white undershirts in 'Filo di Scozia', which today would be like buying gold." 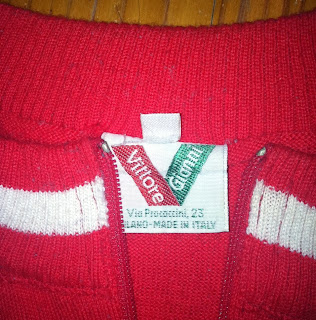 As son of the owner Armando Castelli, Marurizio Castelli grew up in the family biz.  He started out as an errand boy of some significance - with tasks such as bringing packages of Maglia Rosas cross town to Gazzetta dello Sport HQ in via Galileo Galielei.  But one of the side benefits of being an errand boy was hanging around Fausto Coppi, bringing him consignments that must have made Casa-Coppi the cycling equivalent of Alladin's cave.

In 1974 Maurizio launched the Castelli brand.  I remember Vittore Gianni trying to get something going back in the late 80's marketing a 'retro replicas' series through LAKE sport in Chicago (from which my recently acquired FAEMA was produced).  In the middle of the mountain bike boom in those years, these replicas were limited in supply, distribution and consumer demand. After that, the Vittore Gianni brand eventually faded away.   Not many noticed then, or seemed to care really.

But what goes around, comes around.  'Retro' is tragically hip again.  I think it's great that Castelli has revived Vittore Gianni as a label on some 21st century compliant retro styled pieces sold under their scorpion brand.

All nice and pricey stuff, but call me a retro grouch.  I prefer my replicas a wee bit more faithful to the original, like this one.

Thanks Pooch!   Now next year, do you think you can find me a vintage Learco Guerra to go along with the jersey?