The next Eddy Merckx? 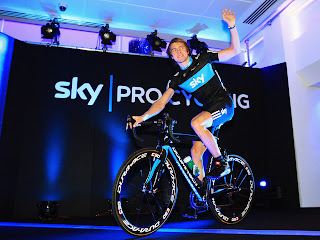 Now as most of us know, the prior 'unofficial' Boassen Hagen brand positioning was "the next Eddy Merckx™" (cue trombones).  That positioning, while natural and attractive, is as risky as sailing toward the sirens call, the branding equivalent of swinging for the fence (last baseball metaphor I'll ever use, I promise).   It's failed every time it's been deployed before.  So quite smartly, those Anglo-aussie London-based masters of all things marketing have deftly shifted to 'the future of cycling'.

Wiggo said Edvald is..  “a rider who really represents cycling's future...Everything about him: his personality, work ethic, the way he does things and the knowledge that he is 100 percent pure." 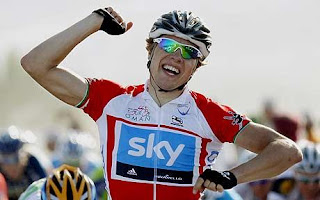 Nice spin.  Nothing like the purity play to garner up the eyeballs, and win back the masses.  You know, Norway, Snow, Purity.   vs. Spain, Blood(bags), Sand...  Masterful!  It's called repositioning the competition.  Somewhere, David Ogilvy is smiling.

C'mon Wiggo, nobody talks like that.  That's corporatespeak.  Tell us about what food your teammate sneaks up to his room.   Tell us what pisses him off.  Tell us a funny story.  But for crissakes, don't tell us he's the "future of cycling."

Podium cafe did an interesting article a while ago contrasting the Eddy/Edvald thing here.   It's a moniker that EBH has been saddled with since he turned pro.  I think it's wrong.  Frankly, I really like this kid.  He's a phenom, no doubt.   Velo mag did a good interview with him last winter.  There were photos of him training indoors in Norway, riding on a moving carpet used by their national XC ski team.  Very cool.  He seemed like another focused, clean cut kid, a great and gifted hard working athlete.  You can't help but wish him well.

It's just that I immensely dislike watching the SKY marketing juggernaut putting all kinds of unnecessary, inordinant and counterproductive pressure to perform on their employe....errr...rider. 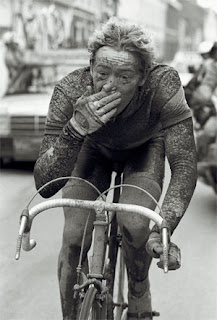 Samuel Abt did a good article about the 'next Eddy Merckx' in Bicycle Guide back in Aug. 1987.  The subject was Eric Vanderaerden, a class talent who was saddled with that fatal moniker, and the weight of those fatal expectations messed him up, as it did Daniel Willems, Fons DeWolf before him, and Frankie VDB after. In Abt's article, Vanderaerden's quote resonates like the proverbial bell tolling...

Funny thing is, I remember reading an article where Boassen Hagen was asked about Merckx and other old champions, and he claimed he didn't really know or follow the history of the sport.   It struck me funny, a characteristic that was, well, not very 'Merckx-like'.  An 11 year old Brussels boy named Eddy Merckx burst into tears when he heard the tragic news that his wieleridol Stan Ockers had died in a crash on the track. Think about it.  Would you have cried if your favorite sports star died when you were 11?   Eddy was a superfan of cycling as a small child, organizing races in the street with other kids, all the while dreaming he was Charly Gaul or Anquetil.  I think...no I know that that unexplainable nugget of unbridled passion inside him, that passion for cycling provided a lot of the power source that fueled those exploits that set the bar so high that others never seem to reach it.

There never will be a next Eddy Merckx.  That said, I wish Edvald well in his quest to be 'the future of cycling'.  I know Merckx hopes so too (here).

It's just that I think that his mega-marketing-machine team and teammates serve his interests better by just shutting the hell up and letting the kid's legs do the talking.