Photo of the Day: The only two Dutch Tour Winners... 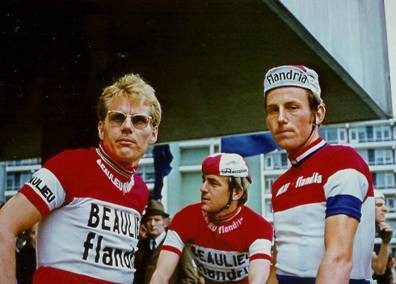 The only two Dutchmen to win the Tour de France, Jan Janssen and Joop Zoetemelk, had a few things in common.

First, they spend most of their careers in French teams, living in France.  Jan for Pelforth beer and BIC; and Joop for Mercier and Gitane and LeJeune.

Both were also Flandria teammates, in 1972.

1968 Tour Winner Janssen (left) was nearing the end of his career.  He was brought into Flandria to help their rising star Joop Zoetemelk (right, 2nd in both the '70 and '71 Tours) eat the cannibal Merckx by putting him into a Dutch tactical sandwich.  It was a big time for Dutch sport, the era of Johan Cryuff and Total Football.  The Flandria folks in Zeldegem must haverubbed their hands envisioning similar, exciting 'totaal wielersport' from these two Dutch Masters.

It was a good plan, but it didn't work out.  Janssen has a serious crash that spring that precipitated the end of his career.  Joop ended up a respectable 5th in that year's Tour, but had to persist and persist and persist until 1980 before finally winning the race of his dreams.  He's my 'most deserved' Tour de France winner of all time.

The Netherlands has been searching ever since for a champion to live up to these two contemporaries.