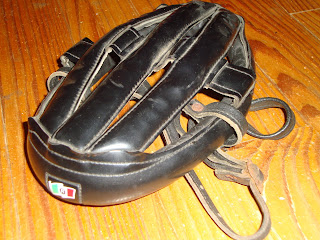 I've heard they say at AA meetings, the first step toward recovery comes with the admission.

So OK, I admit it.  I'm a bit of a pack-rat when it comes to certain old pieces of cycling gear.  Not so much with old bikes, to me they're a thing of beauty for sure, but primarily a tool to beat upon.  But some pieces of gear establish a more personal connection.  Why do we decide to keep the things we do?  Who knows, this is a wielercafe, not a psychologist's office!

All I know is that I can't bring myself to get rid of this helmet.  This Rogelli Sport patent-leather hairnet saw a lot of action back in the eighties.   I think I got it in 1982.  Rogelli Sport was the helmet to have at the time, the approved war bonnet of Hinault, Raas, Saronni, Zoetemelk and what seemed like half the pro peloton in the early eighties.


I first noticed one when it adorned a raging Jan Raas as he bludgeoned his way over and through Giovanni Battaglin to win the 1979 World Pro Road Championship on his home roads in Valkenberg. 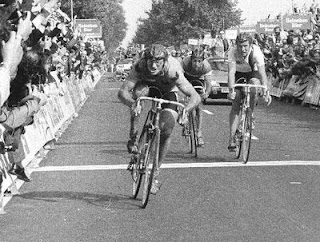 After that, patent leather heads with a little Italian flag were everywhere it seemed. You'd primarily see them in Belgium and Holland where helmet use was mandatory.  In those lawless, latin gladiatorial lands of France, Spain and Italy, they still wore cloth caps... or raced with windswept hair. But in the eighties the only sights more consistently seen at a Belgian Kermesses were frites... and mullets.

Rogelli Sport helmets were hard to find stateside.  I remember seeing it listed as a single, tiny black type line on a colored paper distributor monthly sell sheet, and ordering one about 12 and a half seconds later.  I think it cost about $25. 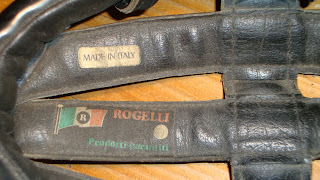 I also remember the day it arrived at the shop in a box with Campagnolo parts, Vittoria Tubular tires, and Moa wool jerseys.  I vividly remember getting a lecture from a smarmy coworker about how little protection it would provide, a warning that never penetrated the thick-mick skull for which those padded strips of leather were destined to provide a form of quasi-protection.  I was immune to unsolicited advice from a schmoe who didn't know jack about wielersport.  Good enough for Hinault, good enough for me.   I think that slow day at the shop ended with my brother shooting plastic caps from the air compressor at that guy, while I told him as he cowered that he really should be wearing a hardshell helmet.

As bike gear useful lives go, this helmet lived a good one.  While it wasn't lucky enough to draw a topsporter pro as its owner, it got to live some pretty good action nonetheless.

If it could tell it's life's story, it would tell of a long, magnificent but ultimately doomed two-man breakaway with Martin Bruhn in the Harvard O.D. road race.  Of being glued to Louis Garneau's wheel in the finale of the '83 Maine International road race under the highly convenient excuse of protecting my best buddy Jeff Slack's winning breakaway.   Of being covered in a film of perma-sweat over a fried brain during the Superweek Holy Hill road race in 95 degree Wisconsin summer heat.  Of how it gained some scars on it's shiny finish by sliding along the macadam main street in the Pawtucket criterium.   And of how it was, more often than not, thrown into the back seat of a car in post-race frustration and disgust. 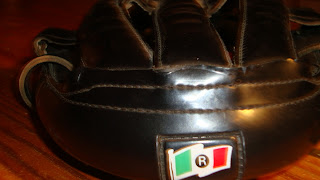 But it would also tell of how on more than a few special days, it got to be the first over the line ahead of a panting, raging peleton, rising up into the wind between two arms thrust toward the sky.

It was put into premature retirement in '86 when the USCF mandated hard shell helmets.   Today, a leather hairnet like this is a relic of a time gone by.   I wonder if teens today look at this like we used to look at my grandfather's era WWI era tin helmets I recall similarly hanging in dusty basements? 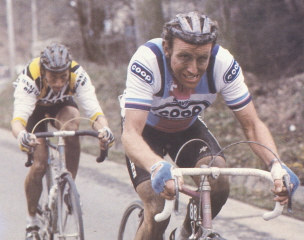 I wondered whatever happened to Rogelli Sport. I remember seeing a small booth in the Italian pavillion at some international bike shows in the 80's and 90's.   I think they produced clothing and shoes as well, I can't remember for sure.  The web offers few cues, but it seems the Rogelli brand name is now owned by the Dutch company Gowa B.V. a company started by ex-pro and Eddy Merckx teammate Rini Wagtmans and is used on sports clothing.  Story of the company at their website here.  Wagtmans, now that guy was the real deal.


Perspectives on safety have so changed since then, undoubtedly for the better.   I wear a modern helmet on every ride without a second thought.  However, I still have pangs of nostalgia for the hairnet and cloth cap days.  It was great for wielerfans, for you could see the riders whole faces.  Their personalities and emotions were much more evident and in view before they were hidden under glasses and plastic helmets.  Look at Zoetemelk in the picture at left.  See what I mean?