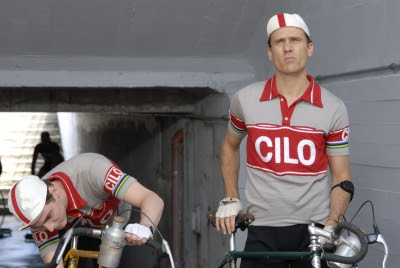 Late last year, a new Swiss film was released about the life of Hugo Koblet: the Swiss champion of the fifties they 'called the pedaleur of charm'.  It's now out on DVD.

Most of you wielersupporters likely know Koblet's icarus-esque story.  He was the proverbial shooting star.  A boy who came from neutral Switzerland after WWII and used the reference of early 6 day track successes (including one in Chicago where he fell in love with the USA and taught himself English) to rocket to iconic wins in the 1950 Giro d'Italia, and 1951 Tour de France.  More career detail here, here and here. 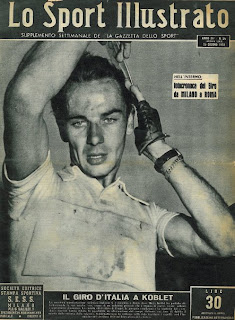 His 1951 Tour de France win included what the French Velo magazine readers ranked as  one of the one of the 'top 5 greatest escapes' in Tour history.

It was the stage from Brive to Agen.  A hot day in la France profonde, in more ways than one.  Not a mountain stage, but plenty hard enough.   Hugo rolled off the front solo with 140k to go, riding easily on the tops.  Behind, the greatest stars of the national teams of France, Belgium and Italy (Bobet, Geminiani, Robic, Coppi, Bartali, Schotte, Magni, Van Steenbergen, Van Est) all rode like crazy to bring him back.   They never made a dent.  He just rode away from them, and never looked like he was trying.  60 years later, and they still talk about it.  Check out the original video here.


Koblet had time to nonchalantly raise one arm in triumph, comb his hair, and check his watch -  2 min 35 seconds over the bunch.  He didn't take jaune, Dutchman Wim Van Est still held it until his famous cliff-dive on the descent of the Aubisque a few days later.

What he did do, was effectively take the heart out of his esteemed rivals.
"Koblet must have a motor under his chest" said provencal climber Lucien Lazaridès.  Seems Spartacus Cancellara wasn't the first rider in red with a Swiss cross who was accused of having a motor.
"If there were two Koblets in the sport I would retire from cycling tomorrow", said eventual 2nd place Tour finisher Raphael Geminiani.


The Italians stars were similarly incredulous.  "In the ten years that I have raced, I've never witnessed such an exploit" said Magni.  And the incomparable Coppi himself said "The only way to beat him is to hope that he blows up tomorrow, but he is young, he will recuperate quickly."

Fausto was right.  He never did blow up, he won that Tour with 'two fingers up his nose' as they say over there.  And the women swooned.

Many forget that he was the first foreigner to win the Giro, in a year when it finished in Rome, Koblet carried to triumph on the back of a convertible like a conquering Caesar.   I wonder if there was somebody whispering in his ear, 'all glory is fleeting'.

It would have been appropriate.
The descent from his career summit commenced soon after his Tour victory.  Coppi stole the '53 Giro from him on the Stelvio, and it went downhill from there.  He crashed out of the 53 and 54 Tours (video)  Post-cycling, his marriage to a Swiss fashion model failed, as did various business ventures.  Tragically but somehow perhaps predictably, he died James Dean style, crashing his Alfa Romeo into a tree in 1964.  To this day, the debate rages as to whether it was suicide or not.

In Switzerland where tradition is revered, Koblet remains a well remembered, beloved hero, a fact evidenced by this cinematic tribute.   Think I'm exaggerating?  I remember buying a magazine in a Zurich airport newsstand dedicated to his career - in 1993. 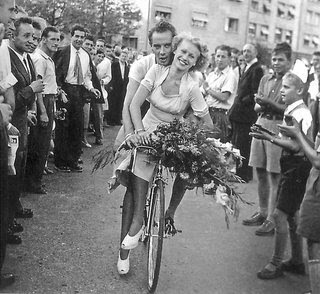 For me Koblet will always remain important as an icon who brought modern 'style' to pro road cycling.

After World War II, road cycling was still a lot like boxing, a sport for rough-hewn peasants and working class boys as rugged as the broken roads they raced over.   Koblet was perhaps the first to seemingly transcend this toil, a near-perfect manifestation of the long-limbed modern rouleur.

He was Bello Hugo: hair perfect, always carrying cologne and sponge in back pocket, heavy goggles wrapped neatly around the forearm.  On the bike he had a more aero position - hands lightly on the tops, flat back.  As smooth as the swiss watch he'd frequently check to measure his domination.

And he made it all look so easy, smiling for everyone.  Everybody liked him too, by all accounts.  Koblet exuded film star quality.  The pedaleur of charm, as Jacques Grello so appropriately nicknamed him. 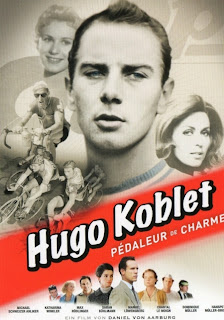 Along with his sidekicks and friends Louison Bobet and Fausto Coppi - Hugo formed the royalty that ruled cycling's Golden Age.  It was a time when road riders first began to live like stars, aristocratic gentlemen even.  Those three were the patrons of the peloton, adding 'class' to the expected champion qualities equation.    Fancy cars, women, and restaurants.
The new film released in Switzerland last year looks like a great one, it's a must see!  It's part documentary, part screenplay adaptation, and has just been released on DVD in European region 2 version with subtitles.  Don't see downloads...yet, anyway.

Note the interview with 92 year old Swiss teammate Ferdi Kubler in the trailer.   The best part of this film for cycling historians seems to be the real comments from the various teammates of Koblet.

There aren't many of that greatest generation left, so it's great to see their stories are still being listened to.