Photos of the day: Hugo

March 03, 2011
While we're on the theme from yesterday's post, here's some more old Hugo Koblet photos.

The ordeal is almost over:  The victorious Swiss team smiles on the final stage of the '51 Tour.  From left, Gottfried Weilenmann, Leo Weilenmann, Hugo Koblet, Marcel Huber, Georges Aeschlimann. 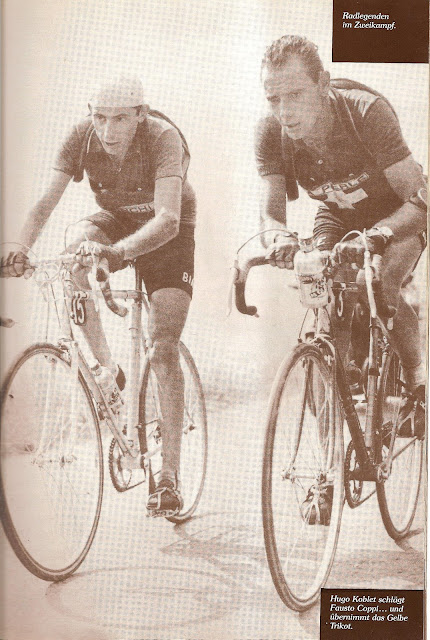 Fausto had just lost his brother Serse in the weeks leading up to the Tour, and was literally riding through a nightmare.  He'd lost a ton of time, but later came onto form in the Alps, winning the stage into Briancon.

For Coppi, the fact that he was 'let go' by the peloton because he was about 50 minutes or so behind on GC was a humiliation that would simmer all winter, fueling his 1952 Tour domination. 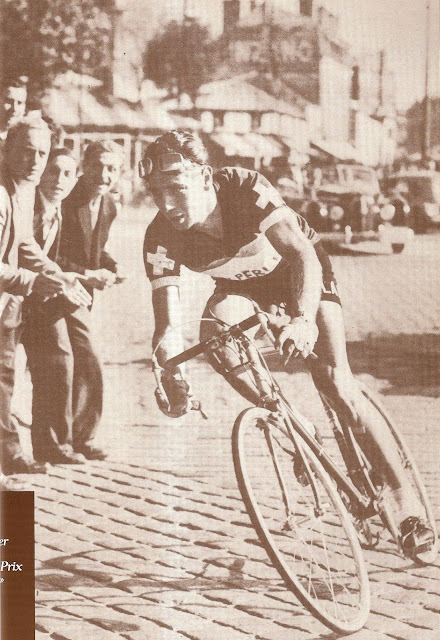 Hugo kept his Tour form through to early September, dominating the '51 Grand Prix des Nations Time Trial, 1'42" ahead of Coppi.

Back then, the Nations was an approximately 140k time trial.  Have you ever time trialed for 100 miles?   Think about that for a minute.

You've got to love what was the highest level professional TT bike and kit 60 years ago.  Do you think those chest pockets on the jersey were catching any wind?

Or a smooth road for that matter.