The Radio Cup Final: Which side are you on? Take the survey.

March 10, 2011
"Don't scab for the bosses, don't listen to their lies..us poor folks haven't got a chance unless we organize."

It's time to choose your side wielersupporters.

Rumor on the street today is that the AIGCP and UCI have decided to have a football match - some say it will be a real rumble - this Sunday after the Paris-Nice final stage ends to settle, once and for all, the interminable race radio debate.  Winner take all.

Starting line ups for the two sides have been secretly released to Flandria Cafe  this morning.  Here's our exclusive match preview: 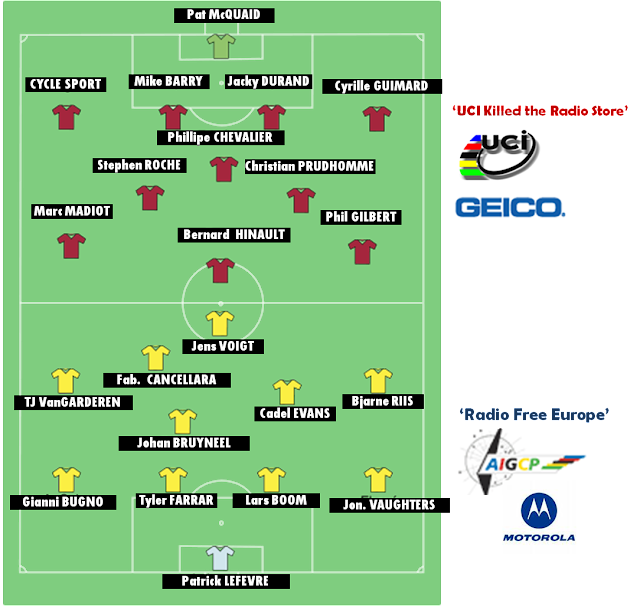 'UCI-Killed-The-Radio-Store' (Geico) Wearing red shirts featuring the Geico caveman in homage to Jens Voigt's taunt that they 'want to bring cycling back into the stone age', this team of dogged traditionalists favoring the radio ban has a definite celtic ethnic slant and francophone flavor. 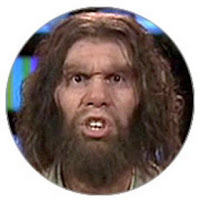 Appropriately, they'll deploy a classic 4-3-3 formation.  Up front they'll rely on the pugnacious striking power of the badger himself, Bernard Hinault, reunited once again with the ever controversial Marc Madiot, and the classic hard man of the moment, Phillipe Gilbert.

Yer man Paddy McQuaid will direct the match in goal, in front of a back four anchored by the hard Breton duo of Jacky Durand and Cyrille Guimard.   The UCI Radio Ban's originator and main proponent Phillipe Chevalier will direct play from midfield, where he'll count on intricate fancy footwork and communication from the affable Stephen Roche and ASO big cheese Christian Prudhomme to secure victory.

UCI Killed the Radio supporters in the curva will be easy to spot in their Geico caveman masks.  There'll be a lot of Bretons and Irish amongst these supporters, and they'll be pretty dang loud after a long coach ride to Nice, and a night on the beer camping out on the Col d'Eze.

'A.I.G.C.P-Radio-Free-Europe' (Motorola) This team of progressives in Yellow shirts has a definite Anglo-Saxon flavor, and represents the current Italian-Flemish-USA axis of trade team power in world cycling.

This squad is more stylish, modern, sophisticated and therefore will employ a complex modern formation created by ex-England manager Sven Goran Ericsson.   The team will deploy a lone striker up front, and who better to spearhead that attack than Jens Voigt?  Jens will be supported by Spartacus Cancellara himself, and it will be interesting to see if either of them get supplied any good balls from their recently estranged ex-DS, Bjarne Riis.

Silver fox Patrick Lefevere will be keeper and pulling the strings, supported by Tony award-winners 'Bugno and Boom', and the Garmin pair, Farrar and Vaughters.   Expect to see Lefevere blaming Vaughters again if some referee decisions don't go their way in the box.  But nothing a nice dinner over a good expensive red wine won't mend though...

Supporters for the AIGCP squad at the match are unfortunately expected to be thin on the ground on Sunday.  Most will be holding court in Starbucks on their Sunday coffee ride, impeccably attired in spotless Assos WinterInteractive kit, and receiving instant match updates on a smartphone app. They'll send their support via Twitter, while keeping one eye open to make sure nobody steals their new Pinarello Dogma with electronic shifting.

It will be a titanic clash of philosophies... Tradition vs. Progression! Technological advancement vs. inspirational improvisation!  Don't miss it.  Bookmaker.com has odds on the UCI to win, with a final score of 3-2.   But what do YOU think Cafesupporters?

TAKE THE SURVEY:  Share your point of view, take our quick 30 second Survey.   Who do you want to win?   Feel free to post your predictions, and add your voice to the pre-match trash talk that's been flying around (below).

The fans should have a say in this too!

Stephen Roche: "In cycling the radios are totally destroying the spectacle of cycling and making the riders become zombies since they don't have to make decisions for themselves, everything comes from the car. They haven't got to pay attention to what's going in the race because they know, well, if I miss a break or if I miss a scene then the car will get word to me through my earphone....I think the radios have been a disaster for cycling."

Bernard Hinault: “It is just a ‘Game Boy’ that has a gigolo attached at the end telling the racer when to take a piss,”

Cyrille Guimard: "Breakaways are systematically caught at one kilometre before the finish. It's legitimate to question this! A closed system generates a mafia system...The security argument is a fraud."

Marc Madiot: "TV spectators want the unexpected, the uncertain, and not scenarios that are written in advance."

Phil Gilbert: "If I could decide, I would race without them. I can see a race, feel a race, so I don’t need it. I won Lombardia without a radio. I was in contact with my teammates and not with the car, and when you have a good vibe with your teammates it’s more important than the one with your directeur sportif. The most important relationship is the one you have with your teammates....Often in races I start with a radio but most of the times I take it off. A lot of riders want the radios because it makes them feel safe but I don’t understand that. I respect it, but I don’t understand. They say it’s dangerous because you don’t know what’s coming up or around the corner but it’s also dangerous when the directeurs tell everyone that they need to be in the first ten coming into a tricky corner. Everyone goes full gas trying to move to the front.”


Christian Prudhomme: “If the sporting spectacle is monotonous and stereotyped, it will be difficult to keep spectators...New generations will not be content with the spectacle of cycle racing as it is presented today. They want a dynamic offering, with action and the unexpected...We must ask ourselves how attractive cycling is and how we could make it more attractive. The figures speak for themselves. Audience numbers are reducing, not so dramatically for the Tour de France as elsewhere, but they are reducing.”

Radio Free Europe / AIGCP  (Pro RADIO)
Jens Voigt: “how we’re going to attract sponsors if we develop our sport back into the stone age? Another urban myth is that the breakaway has better chances without the radios - never heard more nonsense than that.”

"The people who never experienced any of that are the ones making the decisions to impose the ban. I understand that some people don't care what any of us think because, after all, we are only out there for entertainment and to make the sponsors happy. However, I strongly feel this is an issue that should be decided by the athletes. And over 90% of them would say to keep the radios."

Johan Bruyneel: "We see this as commonsense, the radio is a daily tool for us.”

Gianni Bugno: “Radios are important for rider’s safety just as much as say helmets are. The riders need them to be told of dangers up the road and in case they crash or puncture”

Lars Boom: "We will start with earpieces...It's important that we are heard and decisions aren't just taken behind a large boardroom table, which we just have to say 'yes' and 'amen' and 'obey'."

Bjarne Riis: "We are very frustrated. These people who take these decisions never sit in a team car. They have a very romantic view of the sport, but the sport has changed in 30 years...The races will be even more controlled than before. Teams will not take risks. The races will be a lot more boring. Our sponsors pay a lot of money to have our stars win bike races. Look at our situation today. I was in the lead car, there were motorcycles everywhere, fans were on the road, the road was narrow. We couldn’t pass or move forward. We could not communicate with our riders in any way.”