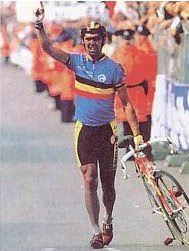 Writing about the Ghislain Lambert film got me on kind of a Walloon theme, what with the Fleche Wallone tomorrow and all.
Today's warped TV retro jukebox theme: Waalse World of Sports. The agony of defeat. (Adopt your best Howard Cosell voice imitation now)
"Ronse, August the 28th, 1988. We're down to the final sprint of the World Professional Championship road race. The local walloon hero, ex champion of the World Claude Criquielion is there with Canada's Steve Bauer, and unknown Italian Maurizio Fondriest. They go together under the kite. They're just off the front and hit the final uphill finish together."
Bauer leads it out. Claudy tries to squeeze by on the right between the narrowing barriers and an elbows out Bauer in full flight. Oh no.... I see some illegal contact dandy Don..."
"Down goes Criquielion!... Down goes Criquielion!"

"Ladies and gentlemen, young Maurizio Fondriest has just stolen the rainbow with an 'I can't believe this is happening to me' grin. The partisan Belgian crowd is going crazy. Now Bauer has just been DQ'd, which will luckily save him from what looks like might become very public lynching. I myself am going for cover before one of these frites-eaters steals my toupee. Back to the studio.... Jim?"
It was a wild scene. Must be something in the water in Ronse. At the only other world cycling championship to finish in the town in 1963, Belgian team rider Benoni Beheyt pulled Rik Van Looy's jersey to steal the win. Another Belgian hullabalou ensues.
To those of us who followed the aftermath of the Ronse affair, it seemed Criq had no sense of humor about it whatsoever. He tried for years to sue Bauer for everything his avocaats could drag into the Belgian courts (assault with intent to injure, lost winnings, compensation for childhood trauma having grown up on a farm in the French speaking village of Deux Acren surrounded on three sides by the Flemish...) 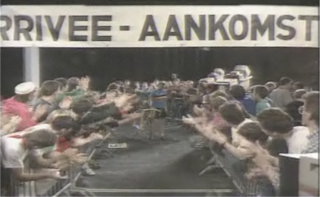 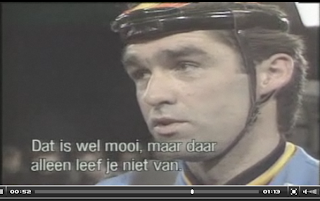 Come on. Can you really believe that an ex-Hockey player from Ontario would intentionally put a guy into the boards... er I mean hoardings. I find it hard to fathom.
Well, it appears that 'ol Claudy did have a little bit of humor. Check out this video link. It features a cheezy TV studio recreation of Cri Cri's famous arms up protest as he enters the studio for an interview what looks like pretty soon after the event.
Criq was a great rider. Two Fleche Wallones. A solo World Championship victory in Barcelona 1984. 2nd in LBL many times...
If only they'd had a hockey team in Deux Acren.