Killin' it at Battenkill 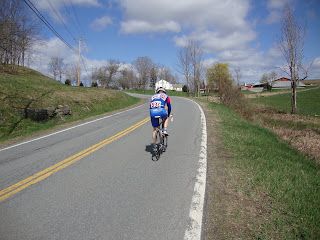 Tour of Battenkill Saturday, my first masters race. Nothing like jumping in the deep end. 100k of temp in the low 50's , 20mph winds, steep dirt climbs. Add in over a hundred guys age 50+ and old enough to know better.
Verdict? Glass half full, half empty. 6oth, but in a group OTB by over 16 min. Not a complete embarrassment...but not to my standards either.
The bad news was that I got shelled from the main bunch on the 20% section of Juniper Swamp road about 17 miles in. Just didn't have the leg power to stay with 'em on the steepest wall.
After a few miles of solo OTB 'blow-up' level crisis and recovery, I found myself caught by a group of about a dozen that kept chasing hard the rest of the way home.
That's when the 'glass-half-full' part kicked in. As the race went on, I felt increasingly super on the climbs...one of the best in the group. On the steeps I kept yo yoing away. A rare comeback I've never experienced in a hilly race like this...ever. 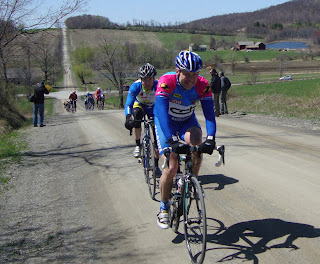 Guess all those low intensity LSD miles paid off when the road went up. But the the lack of higher heart rate power work showed when I needed the two minute effort that could have kept me with the bunch.
But hey, no excuses, and no regrets. The Tour of the Battenkill delivered as promised as a super race, on a truly great parcours. A few well intentioned friends tried to warn me off doing this as a comeback race, saying it was "too-much-too-early-for-a-too-old-too-long-out-of- competition-dog," They built it up into a beast of a ride, with R2D2/Roubaix-esque tales of shattered, groveling riders walking bikes up climbs and rolling in with thousand-yard stares.
The reality I experienced was quite different, and totally enjoyable. Getting to the finish was not as difficult as I'd feared. If fact, in my opinion it is the nearly perfect road race - the essence of what a bike race should be. 3 hours of constant change-up: challenging climbs, 20 mph headwinds, chasing, bombing through small brick towns with locals lining the sidewalks enthusiastically clanging cowbells.
The climbs, while multiple, are not mountains. Putney, Vermont's old Tour of the Valleys and some early season road races in Greenfield and Charlemont Mass. I recall as having much, much harder climbs. With the exception of that damn Juniper Swamp muur, all the climbs could be spun up in pretty good form without really needing to grunt and grovel. The dirt sections were very smooth for the most part - many local winter-and-flood battered paved roads around here are much more 'hell' like.
The vistas were stunning, the course marshalling impeccable. There were even a few twisting descents through farm orchards that could make you think you're in Tuscany... until you get to a covered bridge and snap back to the reality that you're just a few 'k' from Vermont.
Kudos to the organizer... US cycling needs more big loop races like these. Enough with criteriums.
Can't wait till next year, and for the chance for a rematch at Juniper Swamp.