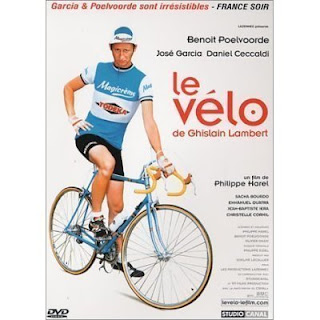 This French language film stars Belgian comic actor Benoit Poelvoorde (Man Bites Dog, Asterix Goes to the Olympic Games). Poelvoorde plays the title character in this 'mockumentary' about cycling's unglamorous side- the saga of a humble domestique whose lack of talent is only surpassed by a blind and dogged self belief in his destiny to become a champion.
Poelvoorde strikes the near perfect tragi-comedic balance in his portrayal of the luckless Lambert, portraying a sympathetic main character with a modest palmares, but also with a spirit and dreams undampened by the stark reality of the gritty pro peloton.
For fans of the Eddy Merckx era of the '70's, the film does a great job delivering a nostalgically accurate rendition of the ambiance, teams, bikes and clothing of the era. The many colorful race scenes include the cobbled muur of the Tour of Flanders, the Bordeaux Paris derny-paced marathon, and of course, some great Alpine vistas of the Tour de France (a 'legendary race' that interestingly is implied but never referred to by name). 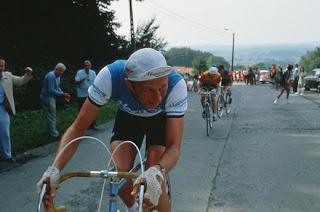 Even Poelvoorde's own hometown gets featured in the famous climb to the Citadel of Namur - a cobbled finish slope featured in so many Walloon races over the years (among the more memorable the site of a memorable winged flight by Fausto Coppi in the 1952 Tour de France, dropping the pack but finishing 2nd behind solo winner Bim Diederich of Luxembourg).
For me, the real richness of the film is in the colorful characters and based-on-cycling-reality vignettes that surround Ghislain. The old-time directeur sportif; the Italian ladies-man gregario who shows the neo-pro the ropes on the bike and off; the ex-pro bike shop owner; the older brother-agent; and the self-absorbed team leader. All remind you of the characters around the sport. Even doping gets spoofed in an appropriately humorous way for a change. 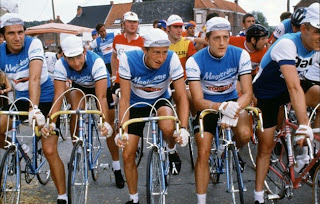 You can download the film subtitled in English from Amazon ($2.99 for a 24 hr. rental / $9.99 to own) here. For you total cheapskates in need of a laugh, check out some excerpt clips here and here.
Totally worth the ten bucks. Grab a few like-minded euro cycling-lunatics, a few Chimay ales, and have a great laugh.
Le Velo de Ghislain Lambert
Flandria Cafe rating: Five (5) Lions