The history of a jersey 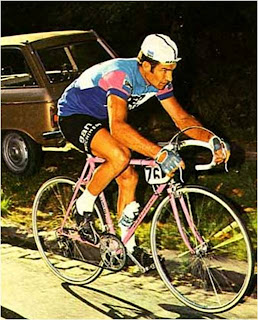 My amateur cycling club - CCB International - has a classic jersey that celebrates its 30th Anniversary in 2010.
Its design was conceptualized by the original CCB (the Cycle Club Basingstoke, England) as a replica-copy adaptation of the old GAN-Mercier professional team jersey of 1972-1976.
GAN is a major French insurance company who along with old line manufacturer cycles Mercier sponsored one of the top teams in cycling in the early '70's. The equipe was led by top Tour de France contenders Raymond Poulidor and Joop Zoetemelk. Eternal second Poulidor took the Gan jersey to 2nd in the 1974 tour behind Merckx. And Zoetmelk and Poulidor finished 2nd and 3rd respectively in the 1976 Tour.
The Gan Mercier team also boasted the Mark Cavendish of his generation, British sprint ace Barry Hoban. Old timers around back then will probably remember Hoban's heads up, screaming open mouthed lunge to the line on the Bordeaux track to just inch out Merckx, Moser and Godefroot and bag the raguese sprint royale of the 1975 Tour de France. Now, that guy was a real bike rider.
Cyrille Guimard - the man who directed Hinualt, Van Impe and Fignon to 7 Tour de France wins 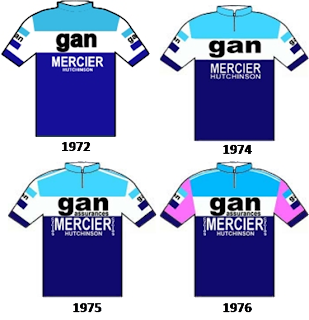 rode for Gan Mercier. And leading the team's medical preparation was a certain Dr. Mabuse... but that's another story...I won't go there.
The early GAN team jersey was two-tone blue with white sleeves. When John Ireland and Jeff Joiner formed the American CCB 'International' branch in 1980, they wanted to structure 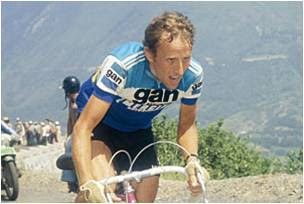 it as an elite level team, closely affiliated with the home club in the UK, and as-pro-as-can-be both in terms of membership (invitation only) and comportment (clean bikes and shoes, white tape, leather helmets, etc.)
The first CCB International jersey was a white sleeved replica of the '72-'75 GAN top with the CCB logo copied from the original CC Basingstoke version John Ireland had brought over from the UK. Just the word "International" replacing "Basingstoke." Those first versions were produced by Jones Cycle Wear in Lunenberg, MA. The colors were not as vibrant as the euro jerseys (the sky blue and off-white pure wool faded particularly after a few washings unlike the acrylic-wool used 'over there') 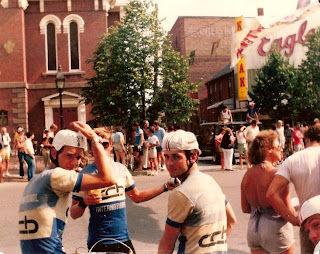 In '81, we discovered during an interclub rider exchange that those oh-so-mod Basingtoke fashionistas had kept pace with the French,
and moved on to adopt a 'Been-Bag' produced version of the kit with the pink sleeves GAN added in 1976.
Not to be outdone, and finding washed out sky blue and white wool near impossible to pick out in the peloton, the US contingent met over the winter in town meeting format (so American!) to vote in the adoption of...wait for it... orange sleeves?!
Yup, back then pink was seen as just a little too girly-man for some of the crustier club elder statesmen. I recall the word sissy was even uttered.
This was not what many of us euro-wannabes had in mind. Somewhat sadly, this eruption of colonist-style democracy was the final straw for club founder John Ireland...his euro-based vision included neither participatory club directorship, nor the design bastardization of a so-carefully-imitated pro cycling fashion icon.
What was even worse was the fact that those orange CCB sleeves lasted here in the states through the 1987 season. But for 1988, as the apex of day-glo 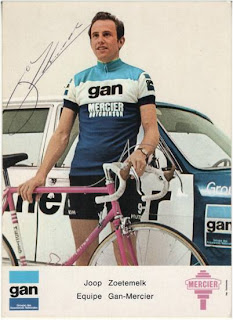 neon fashion was carried by the Miami Vice soundtrack into the mainstream, club supremissimo for life Steve Pucci finally got supplier Louis Garneau to make our CCB jersey sleeves in pink. And with that satroial shift, a very small world was suddenly back in balance.
The color shift coincided with club getting results and recognition beyond local New England races, as our riders in pink and blue quickly became respected on a national level.
The jersey helped kick start the career of Tyler Hamilton, and his just-as-if-not-more-talented sidekick, our original junior-jet, Erich Kaiter. Tim Johnson started with the club and rode to a world's cyclocross podium finish, and a US championship wearing the jersey.
Even Belgian world cyclocross champion Bart Wellens and his club-mate Tommy Vanoppen wore it during a summer-break race visit to the US about a decade ago.
While the CCB International jersey has seen supporting sponsors come and go, it has consistently remained largely faithful to the original design. No selling out. Just a design as consistent as soccer's FC Barcelona blaugrana stripes.
The CCB jersey has achieved a longevity six times longer than its GAN Mercier style-model (thirty years vs. five) - enduring many years longer than most amateur cycling clubs who come, go, change jersey designs, colors and sponsors as frequently as Tiger Woods changes... well.... pretty frequently.
Now an established cycling club 'brand', dozens if not hundreds of races have been won by riders wearing the maillot CCB now so familiar to racers in the northeast.