Hope you all are getting back to haardtrainen after your autumn layoff.  Mine ended Thanksgiving weekend.  Total net gain, a mere 4-5 pounds.  Not too bad, considering I emptied a few bottles of Affligem and St. Bernadeus.  OK, OK, maybe more than a few.  Today it was out into the 35 degree cold.  Snow is predicted for Sunday night.   Need to try to get a few rides in before the white stuff, as well as fit in some Christmas shopping, my son's basketball game, and sporza-cyclocross viewing.  Weekends are so programmed these days.

As is training.  I've been filling my brain with lots of winter training reading, and have decided to give Josh Horowitz advice a try.  He's a pro coach who writes for Pez, and has posted some pretty sound and logical training articles about myths of winter training (here), and on building strength and power on the bike during winter training rides (here and here). 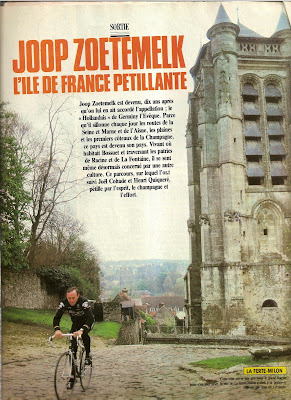 Much of Horowitz advice is supported by things I've seen, read and observed over the years.  The concept of rolling along in a big-ish gear at considerably lower than the proscribed minimum 90-100rpm  is something I've personally noticed many euro pros do in their training since back in the 80'.   It goes against the 'spin spin spin' doctrine I'd been brought up on.  I never could reconcile these diametrically opposing philosophies.

Case in point:  Yesterday's post subject Joop Zoetemelk (an underrated guy if there ever was one).  Joop had a  simple but effective training approach.  His 'secret' was to ride in a single gear of 53x17 on 3-5 hour rides through the Champagne valley in the outskirts of Paris near where he lived, never touching the gear lever.  He'd muscle relatively violently up the climbs... but spin it on the flats, remaining smooth and supple enough to not expend all his force in training.  "It's my secret method...when I'm retired next year and just riding for pleasure, then I'll amuse myself by playing with my derailleur"  said Joop to Miroir du Cyclisme in one of their 1985 'sortie with a pro at home' articles.

Funny thing was, Joop didn't retire at the end of 1985 because he somewhat unexpectedly won the World Pro Road Championship at age 37 (hear that Lance), and rode another few seasons, also taking the Amstel Gold.  Look at that photo, and check out the video of the final kilometers here.  What sweet revenge for a guy who they used to joke never got a tan because he was always in Merckx shadow.  It ever a guy deserved to wear one of those 'Old Guys Rule' t-shirts, it's Joop Zoetemelk.  If I had his address, I'd send him one.

I saw Joop putting his training method into practice myself first-hand in August 1986. He was preparing to defend  his world's road title in Colorado Springs. A bunch of us amateur posers were riding around the course, mixing it up with the pros in the days before the big rainbow battle.  I still remember riding along with Joop dancing easily up the climbs in the big ring, relaxed.  Not spinning, not pushing.  Smooth as a speedskater in his native Leiden gliding across an icy canal.   In fact, Zoetemelk only started cycling as a substitute for speed skating because the canals in Holland didn't freeze for a few winters in the mid sixties.

I'm no Joop, but hopefully a similar approach and a little off season muscle building on the bike will bear fruit come Battenkill in April... we shall see.     I definitely feel stronger doing it.    Riding big gears has always felt easy and natural to me...the trick will be getting the high revs back before the races recommence.   After decades of old school winters in low fixed gears, it will be interesting to see if this more 'modern' approach works.  I'm a little afraid it will kill my pedaling speed, but pedalling fast is no good if you're off the back, is it?

Hope you got a good ride in today as well.