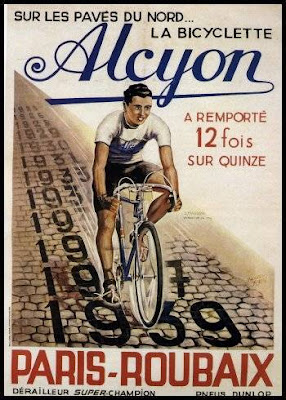 Jeez, I feel like I'm at an Irish wake this week.  Another grand old man of cycling was sadly lost to wielerfanatics over the weekend.

Emile Masson Jr., the Belgian winner of the 1939 Paris Roubaix passed away Sunday.  He was 95.

Masson was the son of a professional cyclist who followed in his father's footsteps.   Both had careers interrupted by wars:  Emile Sr. the Great War, Emile Jr. WWII which saw him spend 4 years in a German prisoner of war camp.  Both rode great Tours de France, Emile Jr. notably winning a stage in the 1938 race won by Gino Bartali.

Fathers and Sons.  Cycling is a sport whose blood tends to run in families.   Sons - and sometimes daughters - often follow in cycling parent footsteps.   The examples go on and on and on.  Axel and Eddy Merckx.  Patrick and Berten Sercu.   The Schleck clan.   Stephen and Nicolas Roche.   Willy and Jo Planckaert.  The Mosers.  Brad and Garry Wiggins.   Les Duclos Lasalles et les Bernadeaus.    Joop Zoetemelks son Karl became a renner.  Adri VanderPoels son is a current terror.  Ditto Jean Paul Van Poppels son, Boy.   The late Gerrie Knetemann's daughter was a top rider in the Nederland national team.  Those are just off the top of my head, I'm sure there are many, many more. 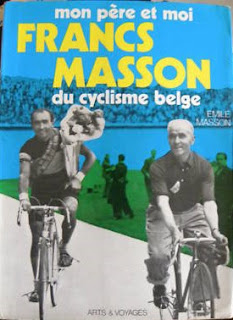 When I started racing back in the seventies here in New England, a good percentage of my fellow juniors were introduced to the bike by their fathers.   My old roommate, the very rapid Neil Hall, was a third generation American cyclist - his grandfather was a professional six-day racer back in the roaring twenties.   My good friend Jeff Slack - a silver medalist in the 1981 Junior National Road Championships and winner of dozens of races in both US and France (including Fitchburg Longsjo and Maine International) had a racer dad who owned one of the most successful bicycle dealerships in the Boston area.    This family business tendency is still prevalent today.  Bobby Lea's mom and dad were both top riders in the Boston area.   Dale Stetina's son Peter is a Garmin pro. And we all know Taylor Phinney's pedigree.   US cycling has plenty of family dynasties.  Walthour, Young, Vande Velde.

The old adage says, "if you want to be a champion, pick your parents well."

But I submit it might be as much about environment and nurture as it is about genetics.   Cycling is more than just 'a sport'... to do it well, to do it successfully, it needs to become a way of life.   If you grow up in a household that 'gets' the metier, where you don't need to explain it, or justify it...well, quite simply it's a massive advantage.  A calm environment.  The right food.  Not having to fret over equipment and transportation.  Understanding of the need for training, and rest.  The right encouragement during those dangerously demoralizing times this sport dishes out regularly.  Environmental aspects that sound simple, but in reality are very difficult to achieve, and to maintain.  Nurture or nature?  Yes.  Both.

I don't know a lot about Emile Masson, but one thing I do recall is a great quote by his ex-pro father after his son won the 1939 Paris-Roubaix.   Masson senior's best had been 3rd in that race in 1922, and his dream was for his son to finish the business and win "la Pascale."   Overcome with joy at his sons solo victory at Roubaix velodrome, he was quoted as saying, "I really wanted to see you win Paris-Roubaix and die two hours later.  I could go in peace, saying: I have made a champion of my son.   Now, he no longer needs me."

A little like the Roger Daltry line: "I hope I die before I get old."  Stated for dramatic impact, but not really wished for.  No, Emile senior was not taken that day in 1939, but I think he soon might of wished that he had been, for he lived through four years of anguish not knowing whether his son was dead or alive during the war.  Happily reunited, he got to relive that Roubaix joy again after his son returned home safe after the war, and quickly won the Belgian Championships and Bordeaux-Paris.  Like his son, Masson senior lived a long life, only passing away in 1973. 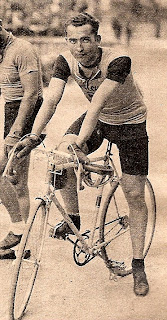 Emile went on after his racing career to be a journalist, and for several years was president of the Pesant Club Liegeois - the organizers of the oldest classic in cycling, La Doyenne, Liege Bastogne Liege.  He was a respected elder statesman of Walloon cycling.

In that April 9, 1939 battle to Roubaix, Emile Masson defeated another favorite Belgian, Marcel Kint - a man nicknamed the 'Black Eagle.'  The French speaking press lauded how the Walloon Masson 'killed' the Black Eagle that day on a pursuit across the broken pave of northern France.

This past Sunday, on the same day Emile Masson passed away, thousands of black birds mysteriously fell dead from the sky in a few square mile area in Arkansas.  As of today, the scientists still couldn't fully explain exactly what caused this bizarre event.

I think I know what it was.  It was Emile Masson, going out in fighting style, slaying black birds again.