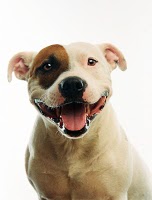 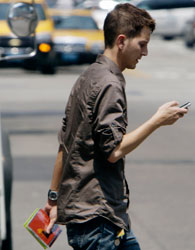 First I'm almost taken out at 70 mph on I-95 by some dip-sh** 20-something girl texting on her cell phone while driving.  Flippin' idiot.

Then, 10 minutes later, I turn slowly in the dark onto my snow-covered quiet street, and a local 16-year-old girl steps out in front of me without looking, her downcast eyes glued to a 4-inch mobile phone screen which is also plugged into her ears.  Good thing I'm one alert crusty old flahute with fully operational sprinter reflexes and not just your average dip-sh*** 20-something texting while driving!  Kid never had any idea how close she came to getting flattened. I shudder to think of it.

I swear, the whole friggin' world has lost it's collective ability to function for 5 minutes without looking at a tiny screen or getting input from a digital device of some sort:  Fast Eddy's introductory metaphor and contextual platform for tonight's raging bulletin rant. 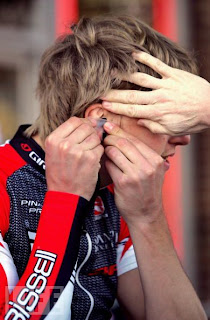 You got it lads....it's time to weigh in on the great race radio debate.

I've been reading the arguments for years it seems.   By way of disclosure, I've never raced with a radio, so I'm probably not fully informed, nor unbiased for that matter.  But you know what?  I don't give two shifts.   I've raced plenty, understand and appreciate the value of race situational awareness, and respect its appropriate role in determining who deserves to stand on the podium on any given day.  When I was a kid in sports, they used to call it 'heads up'.    Sports should reward heads up, not heads tuned out.

Vaughters, speaking for the AIGCP last week said radios are necessary for 'good cycling': "lack of radio communication was simply randomizing the outcomes of races, dumbing down cycling and reducing the value of teamwork, sacrifice and the bond between teammates."

Bullshite!  What a load of crap.  And an utter disgrace to the generations of men who build the sport upon which this current generation profits.  Was there was no teamwork, sacrifice and bonds between teammates in cycling before radios?   The AIGCP just devalued over a century of sporting heritage built on precisely those values.  Without radios.  Did Vietto need a radio to tell him to give his wheel to Magne?    Did VanLooy's team need radios to know enough to stop when their leader needed a wheel?   Did Tour favorite Poulidor need a radio directive to tell him he should help maillot jaune Pingeon on the Galibier in '67?   No meneer sacrifice, teamwork and bonds existed long before digital earpieces.  I'd argue more frequently before. 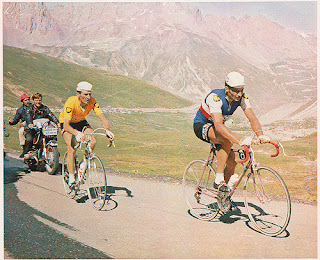 The proliferation of digital devices is breeding a generation of automatons.  Not just in cycling... but as evidenced by my adventures of the day..in everyday life as well.   I shudder to think of a future generation of men who can't think for themselves without the paralyzing effect of information-overload bombardment.  Whose lives are controlled minute-to-minute by remotely pushed digi-messages, or whatever breaks through the noise at any given moment.   I see it in the young people who are driven to perpetual short attention span distraction by their phones.   I see in in folks my own age who can't put their crack-berry down, and have completely lost the ability to not be remote controlled by the last hour's emails.   I've read some of the studies published on the effect of digital overload on young people's brains.   It's scary.    Cycling?  Why should one expect it to be any different?

Because it should be more human and less flippin digital.  That's why.  Cycling is a sport performed on a marvelous self propulsion machine that celebrates- one might say magnifies - human strength, will and athletic performance.   It's not F1.   We don't need no stinkin' telemetry, thank you.   And in that premise, we have to accept, and embrace human mistakes, frailties, and limitations.  And yes, a quotient of luck sometimes.   It's what makes champions rise above.  And keeps them honest.  And keeps it interesting.  Wanna win jongen?  Stay up at the front and keep your eyes open.

I think JV rocks, but in this case I think he's issued a political statement forced to represent the collective view of all the teams he represents.  And we all know team directors love those radios.  Why wouldn't they?  It gives them control.  Keeps them playing the game.   Peter Post, God bless his soul, would have probably gone for inner ear implants if he had the technology at the time.   (Hey Andy Rihs... maybe a new market segment for Phonak hearing devices??)

I say let the riders race and let the directors supply musettes and spare wheels.   There's good reason soccer limits coaches ability to deliver instruction during matches.  Let 'em play.   If they need instruction, let em go back to the car and chase back.

I've seen enough radio-controlled racing in the last decade, thank you very much.  Give me a good old fashioned Hinault style massacre.  Give me long breaks that catch the peloton of favorites asleep.   Give me a Walkowiak winning the Tour.  Give me Dirk DeMol victorious in Roubaix.  Chiapucci out of nowhere to almost steal the 1990 Tour.  You get my drift.

Dumbing down cycling?   Please.  For crissakes, can't we just let these guys think for themselves?  I accept that the results might be more chaotic, less predictable.  But less fair?   Sorry, don't buy it.

Ronde 1969.  Should have, would have Eddy have followed instructions from Lomme in the ear?  Hell no, he would have thrown that thing in a ditch.  He rode on instinct.  To a great exploit.  As it was then, and always shall be, forever and ever.  Amen.

I say bicycle road racing - the real racing that wielersupporters around the world love - is about a lot more than reading an SRM and being directed by your 'brain' back in the team car to avoid any obstacles that would, God forbid, actually reward some heads-up alertness, independent thinking and improvisation.

But alas fellow flahutes, I'm a dinosaur, I admit it.  A technophobe from another generation.  What do I know about modern cycling anyway?

Maybe not much.  I just know that I almost ran over a kid tonight who was plugged into an earpiece who should have been paying attention and thinking for herself.