The Red Guard is Back! 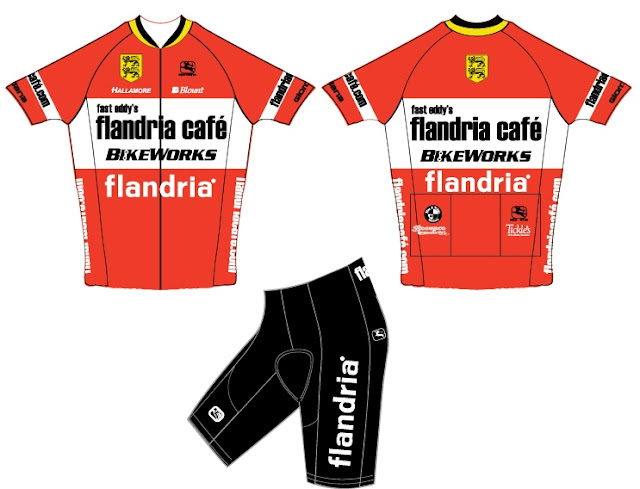 On Wednesday night, in the middle of yet another snowstorm, a group of middle aged American flahutes proved their stripes by ignoring the TV media's 'sky-is-falling' exhortations to stay off the roads, and instead gathering at BikeWorks in Swansea Mass. to share a Duvel toast and launch a new Masters racing team:  Fast Eddy's Flandria Cafe - Bikeworks - Flandria.

We assembled a great group of 45+ masters riders who will focus on doing New England races and Gran Fondo rides.   I'm proud to be riding with all of them this year.   Who are they?  Oh don't worry, this blog will be roasting most of these guys as the season goes on.  (Wouldn't be a real wielercafe if we didn't now would it?)
For now suffice to say it's a mix of guys whose cycling cred runs the gamut from Ex-Pro to Nieuweling, but who all fit their passion for hard old-school riding into balanced, successful and responsible lives.  Family guys who share a proper perspective on where sport fits into life.

Or as our flandria cafe founding member Marc 'DeMeyerstein' put it:  "We're kinda like Rapha ... only with Belgian beer."

Joking aside, I'm excited to partner with BikeWorks' owner Bob Polakowski in a shared quest to demonstrate that 'old guys rule...or will at least die trying'.   Bobby is an old friend who over time, has grown the Swansea Velo Club into one of the best racing clubs in Southeastern New England.   Bob's that really rare kind of guy who could remain a supportive friend...even when I opened a rival bicycle store just seven miles up the road a decade ago.  Now that's my definition of a truly good person.   Similarly, Bob's been just as good a friend to many in the area who share his passion for cycling.  I know firsthand just how tough the retail bike biz is, and know it takes a special kind of guy to make a success of it.  Bob, Matt, Dave and all the guys there make BikeWorks the kind of store that takes care of every customer from the top racer to the recreational rider.    If you're ever in the neighborhood, drop in, or check out the website here. 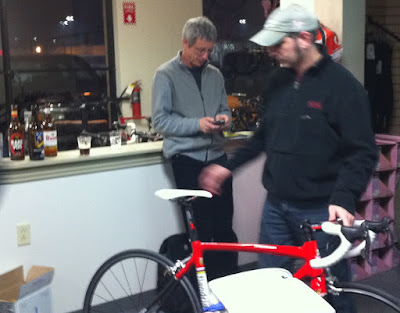 We're also flattered to be representing the newly relaunched Flandria Bikes over here in the good 'ol US-of-A.  The guys got a chance to check out a the new Flandria Competition and Professional frames built up, and touch a signed Freddy Maertens jersey.   (And no, I didn't make anyone genuflect first.)  Flandria is the brand that put first Shimano on the pro racing map.  It should be back at the forefront of cycling.  For our own small part, I  feel a little responsibility to get these red bikes back at the front of the Masters peloton, and do a great heritage proud.

We also showed off our team kit design for 2011.  Now I'm no designer, but I've been around them enough to know that when interpreting a classic, you shouldn't mess with a timeless design.  Our Giordana team kit pays homage to the traditional red and white flandria colors and bold clean block design.  I think the guys were pretty stoked to learn they'll be riding this year in the colors of one of cycling's great teams - to uphold an important tradition,  to be 'Flahute', not 'Fred'   I was pleased it was a hit with the guys.  Appropriately old school, don't you think?

John talked about his trips tothe ASO's two L'Etape du Tour cyclosportives this July... he's still got a few pre-registration places still available for these fast closing events.  I highly recommend snagging a spot.  After surviving John's fantastic three day wedding- famously known as 'Ze-Event'- back in '95 at LaCluzaz, I can attest with experience and confidence that JG and Knar definitely know how to design and host fun, memorable adventures.

Speaking of advertures, blogging about the coming adventures of the flandria cafe team will be fun over the coming months.  Stay tuned cafesupporters!