Without danger of exaggeration, I'd say these four ribbed, off-white, Italian wool t-shirts were the single best piece of cycling gear investment I ever made.

No matter how hard I try, I just can't kill them.   They get washed and washed and still look like they did when I bought them. They've been pummeled by washing machines, tortured in dryers - never been lucky enough to receive the manufacturer's recommended care.  No worries though... still as comfortable and functional as the day they were first worn under a wool jersey.

They bear surpisingly few scars from the wars.   And they've seen plenty.  One has a red-brown stain when some red Clement rim cement spilled on it... but that's about it.

Since then I've tried all forms of 'base layers', but keep coming back to these. Amazingly, despite their hefty price tags.. the new stuff doesn't match old wool for longevity.  Many of the synthetic ones pill up after a year or so of washing. Polypro gets permastink, and with some the seams give out after a few years.  The netting ones shrink and lose shape, and end up in a ball that needs reshaping every time you go to wear them. 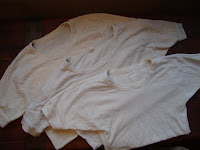 Yet these light wool ones?  They still perform, year after year.

For me, they were a lifesaver.  I sweat like nobody's business on the bike, and a soaked base layer, combined with an impromptu flat tire stop in cold wet weather have a tendency to put me two-ticks away from bronchitis.  Our team Doctor Brad says it's because I have few functioning white blood cells, but I think it's just heredity.

But I digress:  The wicking ability is fantastic.  Evidence that nature sometimes delivers function that man can't replicate.  They're also great on warm days, believe it or not. 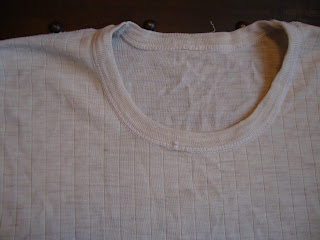 For decades these t-shirts were the undergarment of choice for the peloton.  A classic.   You've seen them in the old black and white photos of the Tour de France stars in their rooms, on rest days.  Or riding a train during a transfer.   They'd be worn hanging out, with long tracksuit bottoms, socks and sandals.  You could get them with sleeves, or in tank top versions.

Normal civilian men have their white button down shirts.   Women have their little black dress.  Flahutes?  Well, they have the wool undershirt.

How ironic that at a time when retro-hipster fashion is so in vogue, that this classic basic is AWOL.     This icon is so missing in action today, it belongs on a milk carton.

Appeal to the world-wide-wieler-faithful:  Does anyone know where can you get these shirts now?  I've looked everywhere, nobody has them.

I have to believe that somewhere, in an Italian warehouse around Milan or Como, there's got to be a pile of these, in a box, brand spanking new.  There they sleep, probably under under a picture of Monica Belluci, or a Pirelli Girl Calendar.  And an Inter Milan poster.


I need that box.