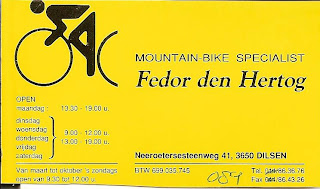 One February day in 1993, I was standing in the ProFlex mountain bike booth at the Brussels bicycle show, showing a new range of full-suspension mountain bikes to an unending stream of Belgian fietsenhandlers.

Most dealers would typically come in, ask for the catalog and pricing, and be gone.  But one visitor from that day stayed with me all these years.  He was a graying gentleman, about 6 feet tall, looking like he was pushing 50, reed thin, with the drawn look of the still-active cyclist about him.   His English was perfect and we struck up a conversation.  He was more interested than most about our bikes, you could tell by his questions.   He was quiet, unassuming.   Direct but polite.   At the end of our talk we shook hands and exchanged cards.   I read the name.  Fedor Den Hertog.   And the penny dropped. 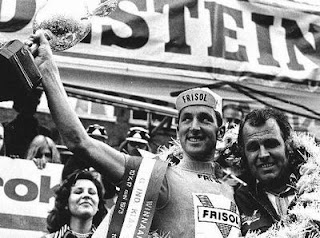 Yesterday morning, I recalled that man, and that brief encounter, when I read the sad news that Fedor Den Hertog - 64 years young - had passed away in Holland Sunday after a long illness.

Fedor Ivan Den Hertog was a Dutchman of Russian descent - a rider nicknamed 'Ivan the Terrible', not so much because of his ethnicity, but because he was the dominant scourge of European amateur racing in the late sixties and early seventies.


Den Hertog was another guy tagged with the 'next Coppi' or 'next Merckx' expectation.  And yes, he was that good, make no mistake about it. A born rouleur who could climb, time trial, and basically ride away from whole fields of riders, seemingly at will.  His palmares included victories in the Milk Race Tour of Britian in 1969 and 1971, the Tour de L'Avenir in 1972, and the Dutch national road championship in 1968.   I remember hearing some top American amateurs of the day who encountered him during national team trips to Europe spinning tales about Fedor Den Hertog in reverent, hushed tones.  Like he was an ogre.  Ivan the Terrible.

In 1968, young Fedor was at the vanguard of the golden generation that birthed a Dutch cycling renaissance lasting well over a decade.  '68 was the year Jan Janssen won Holland's first Tour de France, and that euphoria was soon followed by a celebrated, young Dutch foursome - Joop Zoetemelk, Jan Krekels, Rene Pijnen, and Fedor den Hertog - taking the 100k team time trial in the Mexico City Olympic games. In those days the Olympics were for 'amateurs' only, and the TTT was one of two road events.

It's too easy to say now that Fedor stayed amateur too long, waiting until well after another Olympics in 1972 to finally turn professional for the Dutch Frisol team, in 1974.   In contrast, his '68 teammate Joop Zoetemelk turned pro in 1970 - after winning the '69 Tour de L'Avenir -  and shot right up to the Tour podium.   But hey, hindsight is always 20-20. 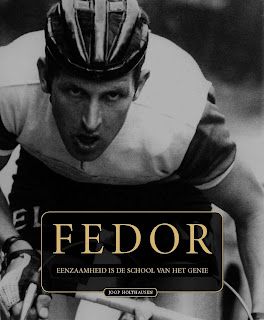 By the time Ivan the Terrible turned pro, his reputation made him a marked man.  The other pros were ready, had his number, and were motivated to put the former amateur star in his place.  Every move he made was smothered.  While a new slate of Dutch riders like Kuiper, Knetemann and Raas started getting more headlines, Fedor struggled with the transition.  After a few relatively empty years, he'd become a solid journeyman pro.  1977 looked like it might be a breakout year.  He won a stage of the Vuelta, then took the Dutch Pro Road championship solo.  He also won the Tour de France stage to Rouen with another patented late solo move.  But it was far from the expectations of many, and probably himself as well.   He lasted as a pro till 1981, and after retiring, like so many, he opened a bicycle shop. His was in Dilsen, Belgium, just over the border from the Netherlands.

When I met him, I thought it poignant that his business card said 'Mountain Bike Specialist'.  It was sign of the times in the early '90's.  Conventional wisdom across Europe deemed road bikes as 'the past', something just the 'old men' rode.  The young generation, and the future?  It was all going to be about Mountain Bikes.   I thought at the time it was a shame that Fedor was forced to find his way in a commercial paradigm that neither leveraged, nor had any appreciation for his (to me) highly impressive past.   I recall chatting with him about road cycling a bit, the glory days.  I had to pull it out of him.  I think he was surprised to find an Amercian who knew about his career.  Two guys talking about the milk race, surrounded by knarly fat bikes and young flemish 'dudes' talking about getting air.  Funny now how 18 years later, almost the exact opposite scenario played out.   Road cycling instead resurged with vigor.

I recall Fedor Den Hertog as much different than the 'ogre' image of him I'd built up in my mind;  formed from tall tales of a man so strong, he could destroy the whole Milk Race.  Who could win 9 of 11 stages in winning the Rhineland Pfalz stage race by 36 minutes.

In contrast, I discovered a quiet, polite man.  Smiling and friendly, with no airs about him whatsoever.   No mention on his business card of who he was, or what he'd achieved.  The Dutch way.  When your Queen rides around on a bicycle with the rest of the citizenry, it sets a different example about how the most accomplished of us should comport themselves.  Quiet modesty is revered, and expected.  Just another thing to really, really like about Holland.

The press said Fedor eventually closed his bicycle store for 'family reasons'.  After, from time to time he'd appear on some Dutch TV shows, and seemed to have some association with Tacx, but I'm not sure about that.  Retrospective honors for his past achievements started coming in somewhat belatedly over the past few years.   I'd noticed a Dutch language book was published about his career: Fedor.  You can buy it here.

There's some great videos of Fedor Den Hertog in action on the NOS site here, including his Tour Stage win and Dutch Pro championship.   There's also a few different interviews embedded in the post with some great old footage of the man in action.

His family posted a website diary documenting this great man's final months, a final battle fought with dignity. So painful to read.

A sad day for cycling.  RIP Fedor.  You'll be remembered.