What's an honest man worth?

February 02, 2011
"Of more worth is one honest man to society and in the sight of God, than all the crowned ruffians that ever lived."


- Thomas Paine, Author of 'The Age of Reason'
Like many of you, I finally finished reading the Floyd Landis - Paul Kimmage transcript last night.  Nothing in it surprised, or shocked me. Through my lens, Landis comes across as a pragmatic, ambitious kid who got into a corrupt system.  Indignant after being victimized when the same system flicked him, he's deployed the "if I'm going down, I'm bringing you all with me" tactic.  The 'ol back to the wall nuclear option.  Not a new concept, we've seen it in Mafia tales for years.   You get a guy in a position where he has nothing to lose, and feels hard done by, and he pushes that button.  But if you do that to the mob, you might get move to a new state, change your name, and start over.   That is if you're not bundled into the trunk of a car first and drilled with more holes than one of Eddy Merckx' old brake levers. 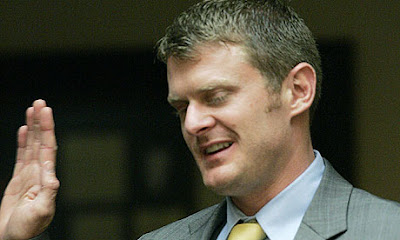 But alas, there's no witness protection program for highly public ex-Tour de France champions who spit in the soup.   They instead are dropped big-time to deal with broken families, stunted career options, and judging by the vitriol on the web, irreparably damaged personal reputations.
I read the venomous stuff written about Landis on the web by many ranging from those he's implicating to the man in the street, and quite frankly, I don't get the vitriol.  Landis gets portayed as a liar, a rat.  'Once a liar, always a liar.'
Perpetual liar?  Or just maybe a truly honest man?   It's one or the other.   Pick your side jongen.
Let he who is without sin cast the first stone.   It won't be me.   I don't know Floyd, and won't judge him either.
I can say that nothing in that Paul Kimmage conversation seems far fetched, contrived or malicious to me.  Maybe I'm a thick Mick, or a little gullible, but it seems like Landis is telling the truth to me.   I'm personally inclined to believe his account.  Not because I want to.  But because it's logical.

If cycling in the past decade has demonstrated one thing for certain, it's a testament to how much Americans love to believe in fairy tales.  Need fairy tales.  But I think fairy tales should be reserved for bedtime reading to small children, stopping around age seven - traditionally called the 'age of reason'.   After that age, pattern recognition and deductive reasoning ought to kick in, and start to provide valid means to opinion formulation.  And sorry, you don't need to have direct proof to develop supportable opinions that are highly likely valid.  And despite what some would have us believe, it's perfectly ok to believe in things you can't prove.

No, in this case I'll go with deductive reasoning and dot connecting based on peripheral personal observations over 30 years in and around cycling.  A veritable mountain of circumstantial evidence.

Guess all this makes me a 'troll'.  Well, so be it.  I'm probably in good company.

Napoleon Bonaparte once said, "The surest way to remain poor is to be an honest man."

And while I'd like to believe that's not true -- in Floyd Landis case anyway, I'm afraid that assertion is sadly proving to be spot on.

But what say you wielersupporters?    Comments welcome...