Herman Van Springel, and the spirit of 68.

OK jongen, just answer one of those analogy questions, the kind they put on the SAT test:

It was a year a lot like this year.  Unpopular wars, unrest around the world.  Students protesting in the streets.   Economic woes.  The music was better though... 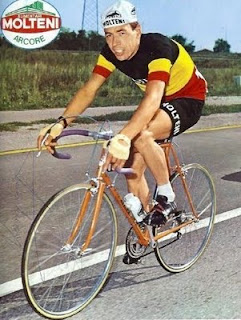 And it was a summer when the Tour de France was lost in a heartbreaking final day time trial to Paris.  Just like Fignon  in '89, only that year, the yellow jersey wearer was a flahute named Herman VanSpringel, a man as soft spoken and modest as he was hard.

Wearing jaune, Herman lost the TT, and the Tour to Jan Janssen, Holland's first Tour winner , by 38 seconds.  At that time, it was the closest Tour finish ever.

Many would have been crushed by the loss.  But I particularly like that the Tour loss didn't seem to faze the unflappable VanSpringel one iota.   He shrugged it off, and laughs about it now.  Because 1968 was Van Springel's best year in a pro career that spanned 17 of them.  It was the year he won Het Volk, the Tour of Belgium, and the Giro di Lombardia.  And the year he was 2nd in Paris Roubaix, the Pro world road race championship, and the Grand Prix des Nations time trial.     Check out this good clip of him holding Eddy Merckx all the way to the Roubaix Velodrome that year.

Herman Van Springel just might be the best rider most nowadays have never heard of.   He's perhaps best known for winning the now defunct (but totally awesome) marathon derny-paced classic, Bordeaux-Paris.  Not once, mind you, but seven times.   You read that right.  Seven freakin times.  Just the thought of riding it once makes me want to sleep for a month.


After a stint as leader for the Poeders MANN team, he went into Eddy Merckx Molteni team in 1971 as an equipier de luxe, and a pretty hefty pay increase.  And that year, he became Belgian pro road champion and finished 2nd in a Giro D'Italia that Eddy Merckx passed on riding.

Eddy himself said it in Velo magazine a few years ago, "That 1974 World Championship in Montreal?    I never would have won it without you, Herman..."  It was Van Springel who'd gone to the front, and pulled back Thevenet.

The two are still close it seems.  Noticed that Herman's been riding a series of Merckx bikes for a few years now...

His career continued into the late seventies, riding for a succession of Belgian teams:  Flandria, Ijsboercke, Marc-Zeepcentrale, Safir-Ludo.   He rode as a pro until he was 38.  And he's still riding the bike at 68, looking just as fit and like he can still make it really go.   To celebrate the book launch, he did a ride with former mates and opponents Merckx, DeVlaeminck, Godefroot, In't Ven, Vekemans, Verhaegen, Jos Huysmans, De Schoenmaeker and Rosiers.   (News article here.)
Herman's been on a 'media Tour' this week, even doing a segment on De Laatste Show, kind of a Belgian version of the the Tonight Show. along with co-author Mark Van Uytterhoeven, who's a Laatste regular when they feature cycling stars.  Good clip link here with TT footage from that dramatic '68 Tour finish.  Another here from Sporza.