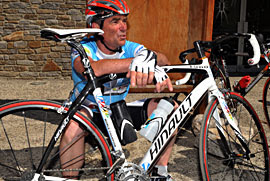 I consider myself quite lucky to have met, and worked with Le Blaireau over a decade ago, even if it was only a few encounters over a few short months.   (I know I probably bore my friends when I retell the stories.  The best is the time he slayed me and a few others on a fun run.)

Spending even a little time together in the company of a person gives you a pretty good insight to their character, into what kind of person they are.   And based on that, I think a lot got written and said about Hinault that is complete BS, especially in the English speaking press.  But I won't retread 1986 here.  For that, I suggest that even if you remember that tumultuous Hinault vs. LeMond Tour, you've got to read Richard Moore's "Slaying the Badger" for a more balanced perspective.  (It's a fantastic read, and great journalism).

Today's cyclingnews article has a quote by Moore suggesting that Hinault's current role handing out jerseys on the podium is somewhat 'beneath him and his achievements'. Well, this crusty old dog respectfully disagrees.

That's the problem with modern society's concept of what constitutes a man's 'greatness' nowadays.  I think that many subscribe to the notion that the accomplished need to be detached, elevated, aloof, and accompanied by inaccessibility    Put on a pedestal.  That's a recent celebrity culture notion that I think modern America exacerbates.  And it's utter BS.

I've always harbored an innate suspicion of the rich, powerful and successful.   And encounters often prove this notion to be well founded.  I've experienced that there's often a high correlation between an indivdual's  'success' and 'full of s***'  quotients.  (Copyright 'the Pooch', c. 1986)  Not always, but more often than not.

While undoubtedly charismatic, many so-called 'important' people (more accurately 'self-important') have upon closer inspection and curious probing, proven to be not very likeable.   I'm sure sure you know the type.   Profiteurs behind disingenuous smiles and handshakes.  People who deign to speak 'at you' like you're wasting their time.   Guys whose every communication is backed by an agenda.  You can almost see their brain doing the calculus of 'is this person useful?  Worth my time?'   They're quickly past you to their next 'important' encounter.

And they usually prove to have a lot of skeletons that come out sooner or later.  Think Arnie the Governator. or even Herman Cain this past week.  You get what I'm saying.   Did you see the 60 minutes segment last night about the US Congress?  I rest my case.

Greatness does not require being accompanied by media staff or bodyguards.  And it isn't measured by the number of twitter followers, or the size of your bank balance.  It's measured by character.  And tests of character don't only get passed by picking yourself up from the cobbles to win Paris-Roubaix.   Or riding through a blizzard to win La Doyenne. True character tests also get passed in daily encounters, one on one.  With people you meet.  People you work work with.  Little things that demonstrate the true measure of a man's greatness.

I found Bernard Hinault to be nothing at all like the caricature.  Not scary, distant or arrogant.  He was amazingly friendly.  The kind of guy who'd look you straight in the eye.  Who'd talk with you, not speak at you, and really listen to what you had to say.   Who'd treat everyone with respect, like an equal.  Polite, patient with language barriers, generous with his attention. 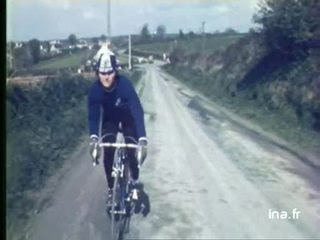 A 'regular guy', but far from your average guy.  You could see he was resolute in his beliefs, and positions.  Not intimidated by anyone, or anything.  The kind who wouldn't back down, or take crap from anyone.

And you could definitely tell he used a different yardstick to measure success in life.  For his wasn't built around 'chasing the dough'.  I remember asking him about his home region in Brittany, a place I'd never visited.  His eyes lit up when he described for me the wild Breton coast, the beauty of the paysage.   He told me I'd have to come there some day, and see Mont Saint Michel.   "You come. We'll go. It's beautiful."   As another boy with Keltic blood who also hailed from a rocky Atlantic coastal town,  I understood a little about what he was saying...

Because they say to really understand a man, you have to go and see where he came from.   So to that end flahutes, check out this French TV portrait video of his early days as a pro chez lui.  Watch the interviews with his mother and wife.  There's pride, and humility.

One's roots explain a lot.  Hinault went back home after retirement, and became a farmer.  That's right, the five-time tour winner would get up at 5AM, and work all day, on his farm.   For years.  That, and the PR work he did for ASO during LeTour left no time for riding the bike.   He sold the farm just a few years ago, and I'm glad to see he's rediscovered his love for le velo that went AWOL for a few years when he first retired.  Seems he's riding a lot again, and looks pretty darn fit.   He's licensed his name to his own bike and clothing brand, and is doing more cyclosportives.   Looking pretty content, back among 'his' people.

So how can being on a TdF podium shaking hands with riders, and introducing visitors to the Tour be beneath him and his achievements?   Cycling is a sport of the people.   It's not an 'elite' sport.   It 'ain't no' Formula 1 (although some seem hell-bent on  making it more like F1).   In the gigantism that is the modern Tour, thank Christ we've still got Bernard Hinault up there every day to make sure we never forget the core of what cycling is all about.   He's the Tour's reference, its living connection to its history, and the human character it glorifies.   There's no better way to honor his station within this special sport, by reminding us that cycling's greatest champion still maintains a real, and personal connection to those who love it, discover it, and participate in it.   Hinault?  He's not a presenter, he's the living, beating heart of Le Tour.  A man who selflessly busts his butt to make it accessible to the people, one person at a time.   Regardless of their importance, or station.

That, jongens, is a true greatness.  Just one man's opinion.

I still haven't got over to see Bernard's Bretagne, but hope I do get there someday.  I want to ride around on those steep green windswept coastal roads.  Feel the cold spray of the Atlantic on my face, and, then stop and have some crepes with hard cider in a stone Auberge.  And a pile of fresh seafood just off the boat.   And as Le Blaireau recommended, finally go to see Mont St. Michel.

But for today, I'll have to go there via the web:  Joyeux anniversaire Bernard.   And distant best wishes for continued health, happiness, and many, many more.