November 10, 2011
When you name your home 'Alpe d'Huez,' you ought to have a pretty good reason.   Well, you can't argue that Lucien van Impe didn't have a good reason for naming his home after the most popular alpine climb among the plaatlanders.   Fact is, he had more than one reason. 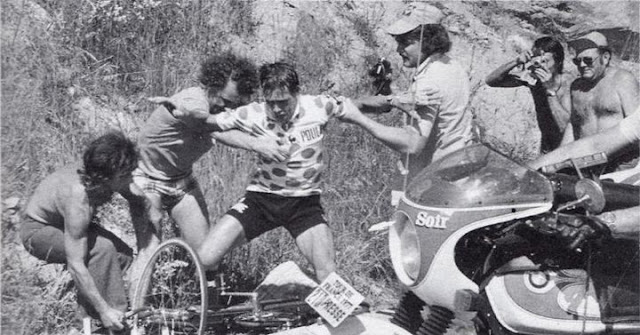 For the climber-god from Impe-Mere, those 21 hairpins to the sky provided a venue for his long career's 'highest high', and biggest 'fall'.  Literally.

After taking the maillot jaune there in a Tour he'd go on to win in '76, he'd come back a year later, this time with Henri Anglade's LeJeune BP team, determined to solo to another Tour win on the Queen stage.

The whole Tour came down to one big day in the Alps.  Stage 17.  Everyone knew it would be the day the Tour was won, and lost.

On cue, Van Impe successfully shed Thevenet, Zoetemelk and Kuiper with a series of devastating accelerations on the Glandon, and had pulled out almost 3 minutes in the valley to the finish climb Alpe d'Huez.

But there was a headwind up that long false-flat valley, and on the steep ramps to l'Alpe, the wheels started to come off.   Without any help, Thevenet was dragging the Dutch duo back up to the dancing grimpeur.  The time gap started to fall.   It was like watching a wind-up toy slowly lose spring.   It looked like Lucien was starting to bonk.

Then, to add insult to injury, with just a few k to the line, a TF1 TV car took him down.   The car hit his rear wheel, dumping him on the rocks.  A messed up wheel, a second three stooges style bike change, loss of rhythm, of morale, and game over.  Kuiper and Thevenet flew by him.   Le Tour, perdu.

You see flahutes, Johnny Hoogerland wasn't the first Tour king of the mountains to get mowed down by a television car.   It had happened before, in 1977.  Only that time, it cost the favorite his 2nd Tour de France.   Le plus ca change...