Photo of the day: Joop, Francoise, and a Derny.

November 28, 2011
Joop Zoetemelk has just released a new Nederlands language autobiography, 'Open Boek', to celebrate his 65th birthday this coming Saturday. The book's made big news over in de plaatland because of it contains some sensational personal revelations by this champion who was ironically criticized during his long career for being less than sensational.
Joop appeared Friday night on the TV show Motel DeJong (video here) - the show of Netherland's top TV journalist Wilfried DeJong-  to promote this magnum opus volume that looks like it weighs as much as a Paris-Roubaix Pave-stone trophy.   Cool book.

For those of you who don't remember him.  Joop is the Netherlands' greatest cyclist ever.  Born and raised near Leiden, he trained to be a carpenter dreaming of being a top speed skater in the elfstedentocht (eleven cities) race.  He started cycling to stay in shape because the canals didn't freeze one winter. 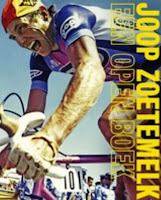 As an Amateur, he worked his way into the elite Amstel Bier squad, and was 1968 Olympic 100k TTT gold medalist before going on to win the '69 Tour de L'Avenir.  He turned pro in '70, and was 2nd in the Tour behind Eddy Merckx, right out of the blocks.   (His suffer to stay with Merckx strategy prompted that old lame joke:  "Why does Joop never get a suntan?  Because he's always in Merckx shadow."  Totally lame.   He, and VanImpe were the only ones who could stay with Merckx.

Despite a near fatal crash in the Midi Libre in '74, Joop went though rest of the seventies as 'eternal second' in the Tour de France (five times he was 2nd behind Merckx, Van Impe and Hinault).   He finally won for himself, in 1980, riding for Peter Post's TI Raleigh Dutch Armada.   Joop was the leader but too nice to be captain on the road.  Post fixed that, he had Knetemann give the orders, and the rest all rode Joop to Paris in Jaune.   It was a Tour full of drama.

First, there was the weather.  It rained almost constantly.   There was an epic stage over the cobbles to Lille, where Hinault and Hennie Kuiper slayed the rest of the peloton.   It was an exploit that cost le Blaireau.  He developed tendonitis, and despite being race leader, his days were numbered.

Injured, Hinault was 5th in the big time trial.  The sharks were circling.  Then, in Pau, the night before the first mountain stage was due to start, Hinault abandoned while still in the yellow jersey.  The press went ballistic.

2nd overall, Joop would have been the new race leader.  But he refused to wear the yellow jersey until the next day's stage was over. (He'd done the same thing in '78, after Pollentier was kicked out at Alpe d'Huez.)

Then, Joop got taken down accidentally by his teammate Johan VandeVelde on the finish climb to Pra Loup in the Alps.

He came back from that mishap, and the next day lost a lot of time on the Galibier to '78 Giro winner Johan DeMuynck, Kuiper and a few others. Never panicked though.  He just doggedly fought back up to the front group.  Jersey saved, he sealed his victory with a win in the final TT over his rival and countryman Kuiper, the same finale scenario that had seen him lose the jersey to Hinault two years earlier.   And Holland had it's second tour winner.

There hasn't been one since.  It will be 32 years this summer.  (And 36 years since the last Belgian, lowlands are due I think)

He wasn't done though.  At age 38 when he was getting ready to hang up the bike, he unexpectedly won the 1985 professional world road championship in Bassano.  Classic attack.  He just rode off with under 2k to to.  Argentin and LeMond played 'after you', and voila.  Joopie wins the regenboogtrui!

I ask you cafesupporters, has there ever been a more deserving world title winner?    If so, post and let me know.    It that wasn't enough, for an encore, he won the Amstel Gold race in '87.    At age 41.

The 'sensation' in that his new book contains private revelations that his late wife Francoise (the daughter of a Tour de France executive) suffered for many years from alcoholism; and the detrimental effects it had on their family and their hotel business outside Paris in Meaux.  Not to mention the effect it had on Joop's cycling career, and frame of mind.  It's a sad story really.  More here if you're interested.

Joopie was always a favorite of mine.  And no, not just because he started his professional career with Briek Schotte at Flandria.  More because of his quiet tenacity, and modesty.  A quote from his old amateur JABO teammate Ton van der Valk in the book JOOP says a lot about where that tenacity came from.

"He always rode low gears, 48x20 I guess, but he could always follow us. The rest of us rode a 49x17. Those legs of his were like pistons, up and down very rapidly. He was really a 'souplesse-jongen'. Back then, I never thought he would be a good climber.  I only discovered his talent when we went to a race in Germany, near Hanover.  It was there that I saw that Joop was fantastic going uphill.."

He still goes up big climbs pretty good.  Check out this profile video of Joop doing a charity ride at Alpe d'Huez a few years ago.

Joop is living proof you don't need to be a loud, 'table-pounder' to be a great champion. Just 100% dedicated to Le Metier.   The new revelations this week make Joop's racing career - and his character and dedication - all that much more impressive.