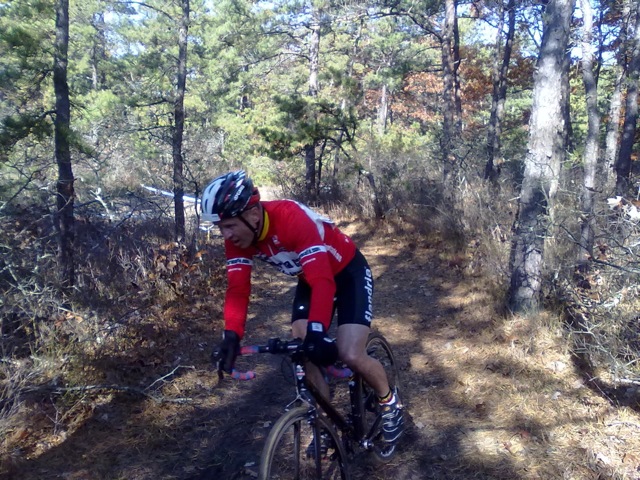 Did a really fun cyclocross cross race in Plymouth Saturday. 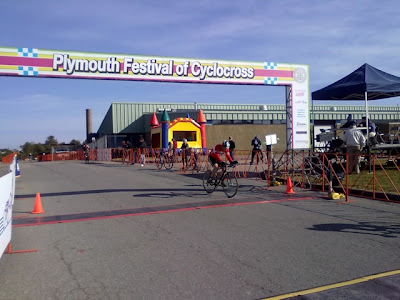 Plymouth Mass. has long been a home of New England cyclocross, this annual race is a few weeks before Thanksgiving, set in the town that holiday is named after.

Thanksgiving was in the air as I drove Friday afternoon 'over the river, through the woods', and across the cranberry bogs to Massahusetts' earliest settlement.   Nostalgia.

Promoter, and Plymouth cycling godfather Bill Sykes put together another great event. This year's edition was on the weekend of Bill's 60th birthday: That's right, 11-11-11!

I stayed Friday night at my pal Paul McCormack's house, so he took me along to also crash Bill's surprise Birthday bash with his family and friends.  It was a nice celebration for a really great guy whose done so, so much for New England cycling over the years.   It was a good craic, catching up with lots of old friends I don't get to see that often anymore.

Saturday morning's cross at Plymouth South High School was not the old 'North' venue I'd recently remembered from the 80's ("No Eddy, this one's at Plymouth 'sout' ")

As Bill said, it was indeed 'old-school cross' at it's best.  The parcours was tricky and had a little of everything:  Windy fast sections across grass and dirt roads, several tricky steep wooded descents around some big trees (!) that wouldn't be UCI approved,  a few off camber traverses, sandy loose bits, a few steep run-ups,  one set of dual barriers, and even a mud bog at the top of a steep 39x27 slog of a climb.  It was cold and windy too, finally some seasonally appropriate cyclocross weather.

Reconning the course and snaking down those tricky twists between the trees, I was reminded of race announcer Paul Nixon telling me the night before about how he'd broken some ribs in a cross race a few weeks ago (ouch!).   I consciously forced that painful thought to the back of the mind.   It turned out (as is usually the case) that what looks impossible to race on scary before the race, suddenly seems 'normal' once the gun is fired, and like everyone else I was carving no-brakes around those trees like they were slalom gates.

This time I tried to barge my way up from my by-now customarliy crappy 5th row grid position.  I barged my way up to what felt like the middle of the field on lap one to a cacaphony of expletives ("Hey!  Whoa!  What the...! Look out!  You A..., "). After the elbows settled down, I think I put together a better race than the last few I'd done.   It was 45 minutes, a bloc.   Hard as I could go, whole time.

Diced with my Teammate Marc Tatar for awhile, but overcooked it and had a bad patch for awhile in the middle and lost contact.   Then had a good battle with a pretty strong guy from NEBC,  was able to get away from him on the last lap and clawed my way back to get Marc in sight at the finish.   A fun 45 minutes of oxygen debt and suffering.

Feeling like every race is a little bit better...  but I'm still lacking power for the faster parts.  I seem to be OK on the technical stuff, and seem to be passing guys on the steep climbs and run-ups, Where I lose ground is on the faster flat grass and road bits.   My cross races seems to follow a pattern, OK first few laps, bad patch in the middle, fight back for a stronger finish.


Marc T. really dug deep, and did a good ride.   He's had a lot of injuries this year, and never fails to impress me with his ability to fight through  them.   He just gets out there and battles.  One tough dude.

Our teammate Jay Trojan rode the Cat 4 race and did a good strong ride.  Glad to see Spartacus doing some cross!  It's always a good sign when a guy is still smiling near the end of the race.    Jay's a little new to cross, but I predict he'll be killing it pretty soon. 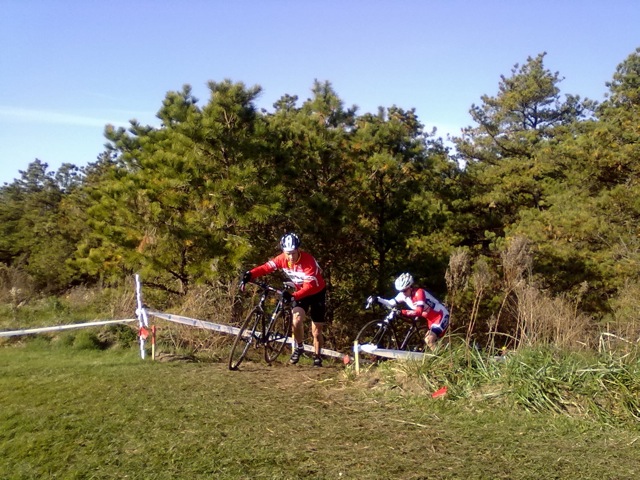