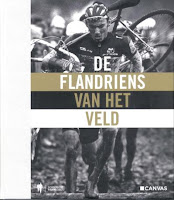 
Clip below is from a Belgian talk show previewing the series... some cool old footage.


Here's the trailer for week one. Good footage of Erik DeVlaeminck.  De beste crosser of all time?   A lot of Duvel can get consumed in that arguement.   Based on palmares and legendary story factor, I'd give Erik the nod, but you can weigh in.  (More on that in a bit...)

Unfortunately more segments or clips are not on the web yet... hopefully they'll put them up once the series is over.

While Wuyts keeps the heritage thread alive and well, a new generation of Flemish cross stars have been providing great entertainment this fall and winter.  I confess since cross season started, I've been more than a little addicted to watching the races live on www.cyclingfans.com.

Most start at 8-9am EST.  Plug your laptop into the big screen TV, and bada-bing.  You're right there in Koksijde.  Or Baal.   Or Overijse.   With some strong coffee and waffles, and it's a perfect winter-weekend AM ritual.  And motivation to get your butt out in the cold and kill it yourself later in the day.

And way, way better than Rosetta Stone for improving your vlaamse comprehension.

Cross is a great sport for TV.  One hour, plenty of action.  Exciting right from the start.  Suspenseful racing full of duels, blowups and comebacks.  There's the occasional spectacular wipeout, usually without serious injury.   The races often go down to the wire too -  although that said, Sven Nys has been starting to look more and more dominant of late riding away to several wins.

The Cannibal from Baal.   Nys was imperially impressive in winning his namesake GP Sven Nys, held in his hometown.  This one was on a really technical course, full of mud, and lots of unridable sections necessitating some 'lopen' with a shouldered bike.

Kevin Pauwels was a solid 2nd.  And Bart Wellens fought back to third.   American Jonathan Page was top 10, he's been getting better and better every week.    World Champ Stybar has been symied by this tag team onslaught from the new generation of Flandriens of het Veld.   The talent is deep too, with Nys, Albert, Wellens, Vantornout, Pauwels, Meeusen, Aernouts, Peeters, Adams all possible winners or podium placers on any given weekend.   8 of the top 10 in the UCI rankings are Belgians right now.

A few years ago, the Dutch and Swiss were just as deep as the Belgians in the top level cross races, but those days seem long ago now.

With Lars Boom's attention more on the road now, and Stybar seeming set to follow suit, the 'veld' is now dominated by Erik DeVlaeminck's spritual descendants.  And with the world's are coming up soon in that sand pit called Koksijde, with the possible exception of really great French crossers (Mourey, Chainel) or a Styby miracle,  I see little to stop a hometown victory from one of the new vlaamse guard in Koksijde.  The biggest question might just be which one will it be?

What do YOU think cafesupporters?   Time to kick off 2012 with another poll: