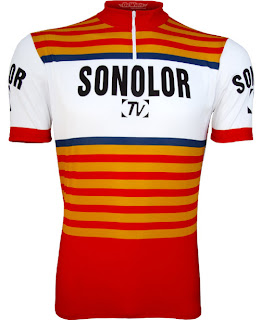 You've just gotta love the sixties-seventies when it came to pro cycling sponsorship.

No multi-million dollar budgets then jongen.   In those days, pro cycling title sponsors tended to be, well, a little more provincial.

And then there's consumer electronics, which in that pre-digital time, meant televisions and radios, tubes and transistors.  If you were a cycling fan in France or Belgium back then, there was a pretty fair chance you listened to Radio Tour in your Citroen on a Sonolor radio, or watched LeTour on Eurovision at home on a Sonolor brand TV set.

And if you lived in northern France up near the Belgian border, you might even have purchased your TV set at a retail store in Valenciennes called 'Jean Stablinski'.

That's right.  The Jean Stablinski.   Hero of the North, world champion in 1962 in Salo, winner of many stages and classics, and Jacques Anquetil's right hand man for most of his reign.    Stablinski was son of Polish immigrants (nee Edward Stablewski) who clawed his way to a stellar pro career, escaping the poverty and mines of northern France where his step-father worked and he seemed destined as well.  Just a few trips into the damp dark tunnels under the Arenberg forest were enough for Stab.

As famously crafty as he was successful, Stablinski invested his hard-earned winnings wisely.   And he made a lot of friends along the way too... one of them a supplier to his store and the big boss of the French Sonolor electronics company, a cycling aficionado named Andre Bazin.   Near the end of Stablinski's pro career in '67, the two friends raced a 'gentleman' two-up time trial together that Stab helped organized in Valenciennes.   It was a rendezvous that led to more significant collaboration.

Bazin had started Sonolor in rue Faubourg Poissonier in Paris in 1948.  His business quickly outgrew that cramped Montmartre venue, so he moved the factory north outside the peripherique to La Courneuve, near St. Denis, in 1959.    During the peaceful boomtime fifties and sixties, Sonolor surfed the consumerism wave, becoming a successful regional brand in both France and Belgium.

When Stablinski retired at the end of the '68 season, he and Bazin formed the Sonolor professional cycling team, with the ex-champion behind the wheel of the team car.

It was Van Impe, who by climbing alongside the raging Eddy Merckx in the Tour de France in '70, '71 and '72, put Sonolor on the map.  The team's results were modest, but it was in the Tour during the Van Impe years they provided their most important ROI for Bazin.  The '72 Tour de France campaign was the team's summit. Van Impe took the KOM prize for the 2nd year in a row, and the team won 5 stages in total (three by Belgium's Willy Teirlinck, one by Van Impe, and one by Hezard).

In October of '74, Stablinski's final Sonolor team hosted the neo-pro debut of a stagaire named Bernard Hinault.  But while le Blaireau entered the peloton, his team's longterm sponsor was preparing to exit the scene.

While Stab was keeping the Sonolor brand in the sports news between '69 and '74, Sonolor the societe was going through a high drama period that saw the company featured in business news as well.   The '70's were a turbulent time in France, when a strong socialist government, labor unions and private business were figuring out how to co-exist.

In the beginning of the '70's, Bazin had sold a majority interest in the company to ITT   On the Night of February 28, 1974, a serious fire broke out at the Sonolor factory.  The arson was claimed by a clandestine group protesting the arrival in Paris of the new Ambassador of Chile, and the ITT Group for their role in the fall of Chile's President Salvador Allende.


Lucien Van Impe's 'King of the Mountains' years were the summit years for Sonolor's business as well.   For Sonolor, after pulling out of the peloton at the end of '74, it was - if you'll pardon the pun - all downhill.

In November '75, more than 80% of the Sonolor workshops went on strike.  In 1977, the left proposed the nationalization of nine major French companies, including Sonolor.  More labor strikes followed in 1978.   In 1979 the company was renamed Ciate, and came under new ownership. But up against the onslaught of global competition, the business finally closed for good in 1985.  The plant in La Courneuve was razed to the ground.

And what became of the team Stab built?   Well the equipe birthed in northern France morphed into one of pro cycling's most successful juggernauts - ever.

After Sonolor pulled their sponsorship, the squad became Gitane-Campagnolo for 1975.   Stablinski again directed Lucien Van Impe to another Tour KOM title (the first year a Polka Dot jersey was used for the mountains leader).

But that same year, Stab had a well publicized falling out with neo-pro Hinault over 'how-much-is-too-much-racing'.  The Gitane brass decided to make a change, opting for youth to direct the team for '76,bringing in a newly retired pro star named Cyrille Gumard.  Pushing aside the guy who'd built the squad, step by step.  The usual story, generations change, the circle turns, youth pushes out the old.

So in '76, Stab had to watch while his prodigy Van Impe won the Tour, pushed by Guimard behind the wheel.   And the rest, as they say, was history.  Later sponsored by Renault, System U and Castorama, Guimard continued Stablinski's 'develop young talent' methods, reinforcing the Gitane squad he inherited over with stars like Fignon, Mottet and LeMond.   It became the team that dominated the Tour - and arguably world cycling - for well over a decade.

These days you can buy a lot of iconic retro jerseys:  Molteni, Faema, Salvarani, Renault.    You rarely see a replica Sonolor jersey.  You can order one though.  here.

Stablinski rode his bike long into his years.   He was famous for not carrying a water bottle on his bike - preferring to stop in a cafe for a drink and a chat with strangers if he got thirsty.   Always liked that story, my kind of guy.   Sadly, Stab passed away from a long illness in 2007.

I can't speak for cafesupporters across the Atlantic, but over here in the states it's pretty hard to find anyone who remembers Stablinski's Sonolor team.

Kind of a shame, don't you think?